Two Souls With But A Single Thought, Two Hearts That Beat As One

Tonight’s event on Pacific was called, Two souls with but a single thought, two hearts that beat as one

According to the Event Moderator website for Pacific, events for February will follow the holidays, and not the ongoing story line for the Pacific shard. With this in mind I set out for the the sacred Shrine of Sacrifice anticipating an epic tale of love.

Soon we became aware of a divine presence at the Shrine was it was an Acolyte of Amor, dazzling white in his appearance. The Acoloyte told us of an ongoing war between the ancient forces of Amor and Detest which had waged since the beginning of creation but unknown to mortals.

We were asked if we would join the Lord of Amor, Cupid the Beloved, for a battle in his sanctum against the Phantom of Hatred. With a tense word of warning, the Acolyte told us we would be tested by his Lord.

After following the Acolyte through a moongate, we were immediately beset by Acolytes of Detest. Waves of noxious gas choked us as we struggled to drive off the Forces of Hatred. As soon as our enemies were driven back, Cupid the Beloved appeared and enticed us to participate in a ceremony to strengthen his forces against the Phantom of Hatred. 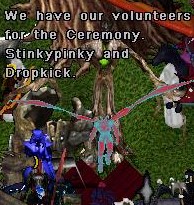 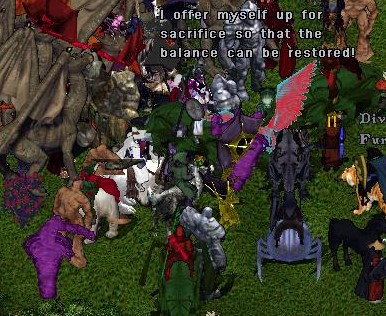 Thus perished, Cupid the Beloved, as well as the Phantom of Hatred, two ancient beings who had warred since the creation of the world were gone. After Cupid’s sacrificial death to guard the world from hatred, a strange flowering plant was found. Shaken by witnessing the deaths of two ancient warring deities we made our way back to Britain! 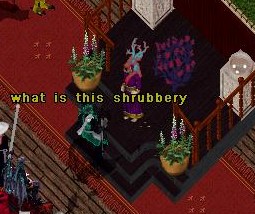 At the EM Event Hall, EM Ashmedai, said that he had requested 15 items for the event. EM Ashmedai said that the next event will be held on 02/18/2016 and reminded us that King Blackthorne has called a meeting for 02/25/2016!

Thankye for an exciting evening of entertainment and deathrobes EM Ashmedai!

I Have Mail From Atlantic!