[Reporter’s Note: This article contains spoilers for those that wish to search for themselves. Some of the pictures were taken after the event.] 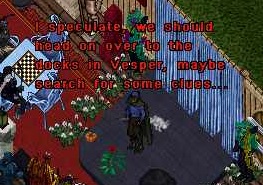 We meet Francis of Vesper at the Counselor’s Hall in Britain to continue the search for the Celeste. From there we went to the docks in Vesper, where we meet up with Mikhail the Fence. 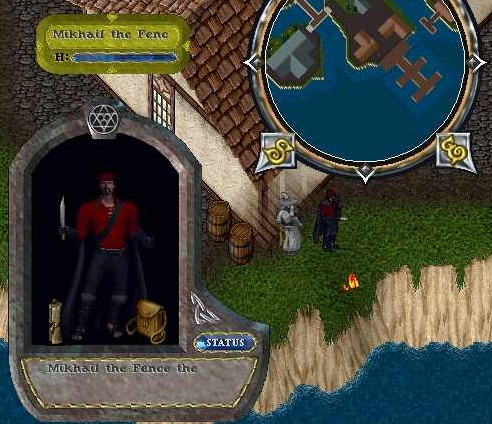 Hello there… Here to sell some goods? Or perhaps to talk about that ship, the Celeste?
Ah! Yes, quite a battle was fought here a few nights ago. The ship and captain…escaped.
Aye, after the first mate fell in battle, the captain Enrico left after making some grim threats.
Captain Enrico seemed to imply that the Celeste and its crew will be seen again…
*shrugs* Perhaps not here in Vesper, but more likely out at sea.
Some pilgrims to the Shrine of Honesty have recently mentioned seeing injured sailors…
The pilgrims said that a Royal Navy vessel on route to Moonglow was attacked.
It could have been anything to be quite honest, but with the Celeste and Vesper recently…
After the battle for the docks, I searched the area to see if I could find anything worthwhile.
I found a tattered parchment with some unknown necromantic symbols and some sort of journal.
After looking through the journal, it doesn’t offer much to what happened to the ship.
The last few journal entries detail a cargo log of various magical artifacts.
I am assuming this necromantic parchment was one of them. And then the crew being cursed…
Aye the first mate Garrett did mention that the crew was fighting against their will.
Eh.. My advice would be to go and investigate the shrine of Honesty on the ice island.
Perhaps a sailor that was attacked the other day could provide you with the knowledge you seek. 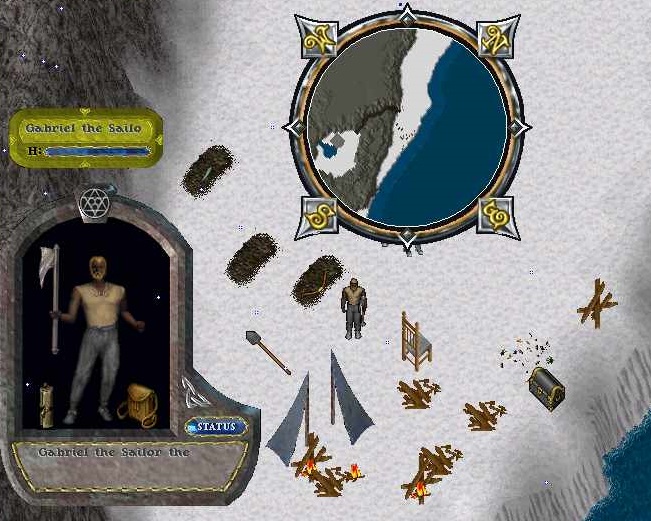 Are you here to rescue us? That ghost ship, the Celeste… it destroyed our ship!
We were on the way to Moonglow to help bolster the defense of their docks.
Moonglow has been under the threat of water elementals in recent times.
King Blackthorn dispatched us, on the request of Governor Linda.
Aye, she is a noble leader for the city, but I digress…
We were about halfway to Moonglow from Britain, and that’s when it happened…
An odd fog, or mist crept around our ship. We could hardly see anything!
Our Captain, Ramon ordered us to stop, until the fog cleared and we could get our bearings.
That’s when it happened, cannon fire struck the side of the ship, severely damaging the hull.
We began to take on water… several lives were lost during the attack.
We couldn’t even defend ourselves, we didn’t see anything to fire back upon.
As our ship began to sink, Ramon gave the order to abandon ship. I clutched onto some driftwood.
We didn’t exactly have any rowboats on board… The driftwood helped me stay afloat.
Luckily an island was not too far off in the distance.
The ice island can be a rather inhospitable place. We burned what we could to stay warm.
But as you can see… *points to graves* not all of us were able to manage.
Captain Ramon, and a few sailors headed to the dungeon Deceit, to seek shelter from the elements.
Tis rather cold out here, if you haven’t noticed… and I’m almost out of driftwood to burn…
I would investigate Deceit if you’re brave enough, perhaps you can find Captain Ramon.
Captain Ramon might be able to help you in your quest for knowledge about the Celeste.
Ramon is very knowledgeable about old folk lore, and tales of the high seas.
It was sort of a hobby of his, the lore of missing ships, and potential treasure they could contain.
If you’ll excuse me, I’m going to chop up some of this wood now… Go and seek out Ramon. 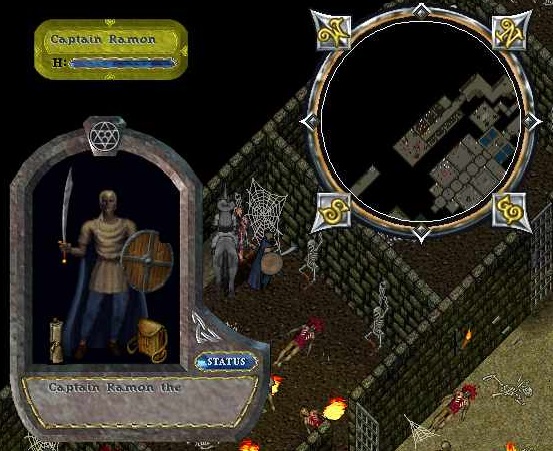 *sighs* Greetings, I hope you are here to rescue me?
I am Captain Ramon. Gabriel and I are all that is left after the Celeste sank our ship.
I should have seen it coming… when we suddenly became surrounded by fog.
Aye, that seems to be the calling card of the Celeste right before she attacks.
We didn’t stand a chance. We couldn’t see anything around us at all.
There was a short burst of cannon fire, we were hit and severely damaged.
The ship began to take on water, and we had to abandon. Much of the crew perished.
They either fell during the attack, drowned or succumbed to the harsh weather on the island.
I came inside here to seek shelter from the cold and snow, but the men I took were killed.
The undead halls of Deceit are still rather alive with nasty creatures.
This makes me wonder, why have you sought me out? Is it for knowledge of the Celeste?
*nods* I do know quite a bit about her ill-fated voyage.
She was on route to Vesper from Nujel’m after delivering a shipment of artifacts to the Sultan.
He is a renowned collector of oddities and various magical artifacts.
He must have tried to use the artifact, or experimented with it somehow.
I am certain it resulted in himself, and the crew becoming undead and cursed.
I am not sure where the ship has been over the past one-hundred years, or why she returns now.
If something was recovered at the battle in Vesper last week, perhaps it holds clues…
If we are dealing with some sort of necromancy, the best person to research this is in Moonglow.
There is an old mage by the name of Stanley who resides there on a small farm.
I was hoping to meet with Stanley after our patrol was finished but priorities changed.
Stanley is very knowledgeable in necromancy. He would be your best bet to gather information.
He has spent a lifetime examining writings, artifacts and pagan items of old.
If you do seek his knowledge, could you please tell him Ramon sends his regards?
Thanks, I’ll be alright in here for a while… At least it’s warmer then back outside.
I need some time to think. Don’t worry about me in here. I can handle myself. *smiles* 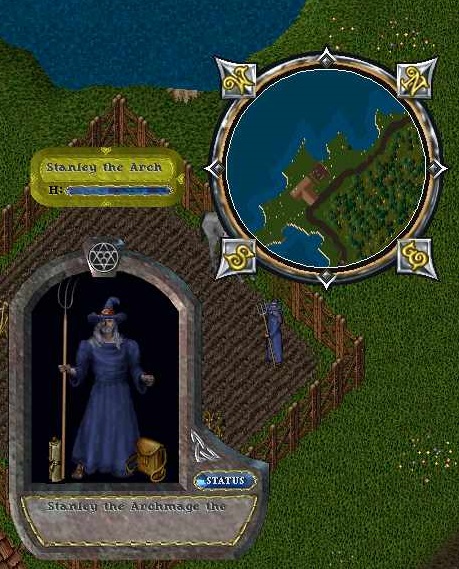 *looks up from his gardening* Hello there! What can I do for you?
You are here to seek knowledge of the cursed, and necromantic arts?
I am the most renowned mage in the lands when it comes to understanding these cursed magics.
Necromancy is very frowned upon in the Mages Guild… this is why I live out here, not in the city.
It offers me seclusion to conduct my studies, without scrutiny from my fellow mages.
I assure you, I do not practice necromancy, but rather have a great understanding of its works.
*scratches beard* Something tells me you are here to gather knowledge about the undead?
Ah, yes! It must be that cursed ship… the Celeste I think they call her.
Quite a nasty bit of lore about that ship…
It was rumored that she was taking some magical artifacts to the Sultan in Nujel’m…
*chuckles* I am almost certain the artifacts were the cursed necromantic variety.
It could have been something as simple as a scroll with odd writings.
Or it could have been a magical piece of jewelry, or even some sort of weapon.
If the Captain did withhold any of these, for his own personal gain, this may be the cause.
From reading the Crier the other day, I noticed the descriptions of the Celeste crewmembers.
They were definitely undead; which undoubtedly leads me to believe we are dabbling with necromancy.
If something was recovered from that ship during her attack, it should be brought to me.
I could have a look at it and see what exactly we are dealing with.
I thank you for seeking me out with this matter.
Perhaps something was left around the docks in Vesper that would be of use? [End] 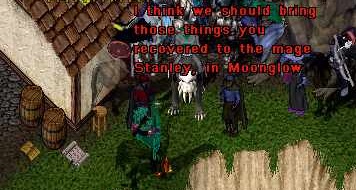 One of the items recovered from the Celeste 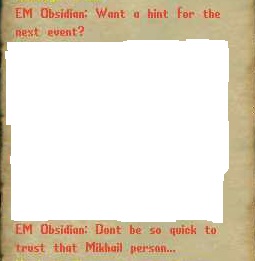 and maybe Francis as well?

Hint for the next event