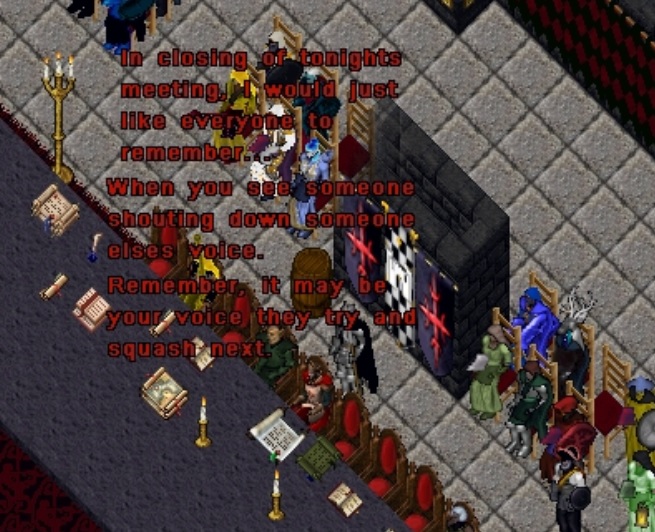 King Blackthorn speaks on the dangers of Tyranny and Censorship in all it’s forms across Britannia.

The King’s speech in it’s entirety:

Small group this evening. But that is to be expected. As we haven’t had one of these successful in a number of meetings due to scheduling. Hopefully we can pick them up with more frequency and get back to normal.

This meeting will be a bit more autocratic than normal, I have quite a lot to say. Hopefully someone will take notes and relay my words to the entire kingdom.

After I say what I need to say, I will open the floor to open conversation.

I have a meeting in an hour with Lady Amandine. So we will need to finish promptly at 8:55.

I wanted to speak tonight about the dangers of censorship and tyranny within our… Britannian community. And how it is important that we not allow a simple few, to rule over us for the sake of their
own power and pleasure.

First, a bit of background. Many years ago, there was a small, what I would call cult in Magincia. They were a pro-human group that shunned all of what they would call, ‘lesser’ species. A small cohort of that group existed still when the child Addie was found in New Magincia. I believe they called themselves the Republic of Magincia. But at their heart, they were still Humanists.

That group was secretly a major influence in the early life of young Addie. And later, under my rule, Lord Adamu often fell back on the teachings of that group. We had many discussions, although private, and they often got quite heated.

I have learned that Lord Adamu was one of the leaders of the modern Humanist movement within Britannia. And after his ‘passing’… or ‘ascension’… Whatever we choose to call it. Others took the baton and spread the Humanist ideal even farther than it had been carried before Into the peasantry. That group recruited and battled back and forth with the Knights of the Crux Ansata, And Lady Amandine herself.

I have reports of several zealous cleansing of Humanist camps in Ilshenar and other areas. Over the years Lady Amandine has been brutal in her pursuit of these people. Interesting considering her connection to Lord Adamu, and of course their child.

Now, let me be clear.

I wholeheartedly and completely disagree with the Humanist philosophy. I find it abhorrent, destructive and wholly disgusting. However. Just because I disagree with a school of thought, or a community of people. Does not mean I, as ruler, have any business in conducting a hunt or a complete… eradication of that group.

Debate and free flow of information and ideas is paramount to any free kingdom, culture…
or community. We cannot allow ourselves to become zealots in the quashing of opinion. We cannot excise an entire school of thought, simply because we disagree with it, or dislike… its membership.

That my friends, is a dangerous path.

I find it completely disgusting the actions of the past few days. How someone in power could think they could exercise such power over a community of people… Is simply tyranny and zealotry. Even as King of Britannia, I allow my subjects the freedom of thought and of action. Even the Traitor Lord Tazar was given leave to disagree with my actions. To debate openly and disagree with his King. And only after he committed a crime of attempted Regicide, was he acted against as a… traitor and a criminal.

We must all guard against Tyranny within our community and our Kingdom of Britannia. We simply cannot allow anyone, ever to speak, or take action for us. That is our right as individuals. The laws of the realm are simple. To break them invites severe action. However, words are almost never cause to commit zealotry against a group of people.

Lady Amandine will be spoken to, and I hope that she hears my words. I will not allow her, or anyone else to speak for the people of Britannia. Britannia has its own voice. Britannia does not stand for zealotry or Tyranny. And we will not abide tyrants or zealots in our midst.

The most righteous and brightest of knights, is easily tainted by what is ‘right’. When you are ‘right’ no one else can speak against that, you step closer and closer into zealotry. Lady Amandine is loyal to the crown. I have only to speak with her, and she will bend her knee to me. However, we must guard against others who do similar action.

I think I have said my peace. my piece as well.
I will add only this…

We are a kingdom of voices.
We are Kings, we are Lords and Ladies, we are Knights and Mages…
We are Peasants, Woodworkers, Blacksmiths and Shop Keepers.
We all have a unique view of our world.
We all see things different.
We cannot stifle any voice, simply because we do not like what their opinion is.
Our community must remain open, free and without tyranny or oppression.

And we must rid ourselves of the zealots that try and silence those voices they dislike.

Lady Amandine will be dealt with. Even her own daughter is furious with her over this. The burning of books, indeed.

The floor is open, to all. Should anyone have anything to say.

***I was unfortunately unable to hear the questions that were asked as most of them were asked from across the room. But I still provide the Kings answers***

Exactly. If we allow someone to silence ideas they do not like people are next.

I am monarch here, I am King, but I rule in a way where all voices are heard.

The majority of Humanists I have heard about are deathly afraid of the Crux Ansata. Most simply want to be left alone. I think for Lady Amandine, the issue is personally. Or rather, personal. Between her ideas and the ideas of Lord Adamu. And which voice she wants little Charlotte to hear. But we cannot allow personal wishes to turn into vendetta.

Remember, it may be your voice they try and squash next.
Stand against Tyranny and Opression.
Do not allow it to take root.
Here or anywhere.
Long Live Britannia!