The word had come to assembly at the HOC. Our Commander wanted to speak to us. A self proclaimed Lord of Delucia, Lief Drowson was to be the subject of this chat. Words had been put out at the last Governor’s meeting and that our commander would be calling for us. 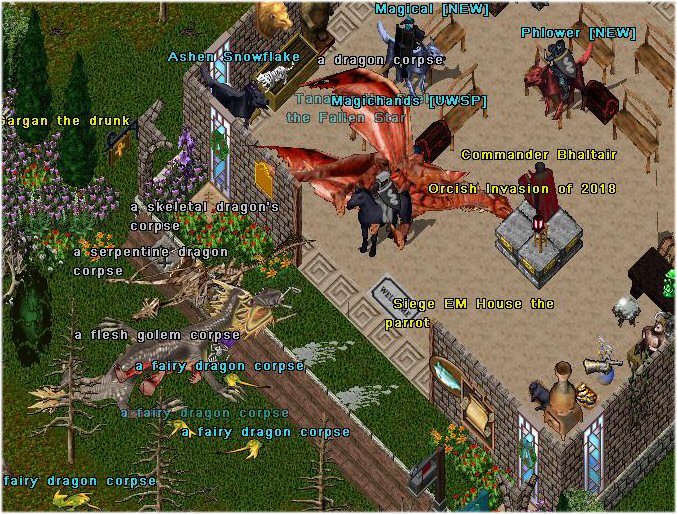 We must have had put a scare into this Lief Drowson, as he tried to put the wammie on us with several types of dragons attacking the Guard at the HOC. Members at the HOC quickly reverse that wammie.

Commander Bhaltair: Greetings, warriors, mages, and other brave citizens! Thank you for responding to our late herald’s call! *surveys the chaos* I have a feeling that you already know what the menace is, judging by the dragon parts around the place.

But, just in case this is a strange coincidence I shall still brief you! A vile brigand, known as Lief Drowson, has declared himself lord of Delucia Why he would wish to rule such a small, out of the way place flummoxes me but we are sworn to protect citizens wherever they are.

Perhaps, perhaps he has unleashed a horde of dragons on the town and seems to be using an ancient artifact to control them your task will be to rid the town of dragonspawn and wrest control of the artifact from this self-proclaimed lord of the dragons.

Judging from the dead dragons hereabouts, you should do just fine! I shall provide a gate – feel free to call allies if you need them! *casts* onwards! for Britannia! 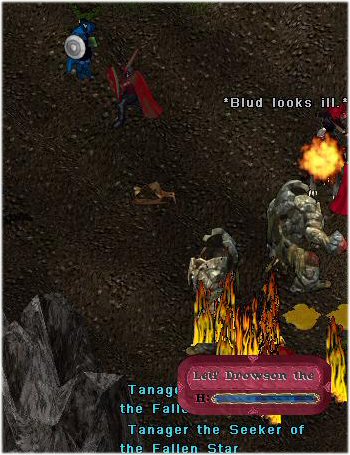 The Guard was attacked just as they enter an area just outside the City walls. By George there be dragons here, big ones, little ones and all with very sharp teeth and claws.

Commander Bhaltair: I shall try to drive them off! fiends! the villain has made himself known! He stands in the building just outside town! *waves sword threateningly at dragonlord* he is over there, and he has Tanager’s puppy! 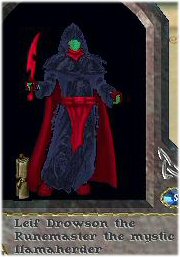 It was a hard battle, guard members fell like core wood stacks, death robes were everywhere but in the end the Guard prevailed.

Commander Bhaltair: Strike him down! fall, leafy one! Fall as all trees must! breathe your last, fiend! die, pretender to power! he has fallen! Well done! well fought, warriors I trust no dragons were left wandering the streets? not to worry – they will die off soon enough Those dragons were strong, though.

Note: There was a drop this night, a grand totem of golden skulls that is a fortune teller. 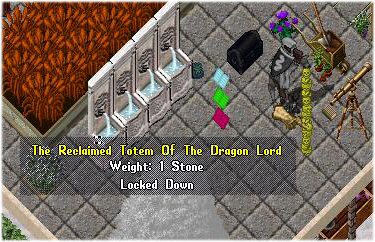 Returning to the HOC we were followed, but once more we put the wammie on the dragons. 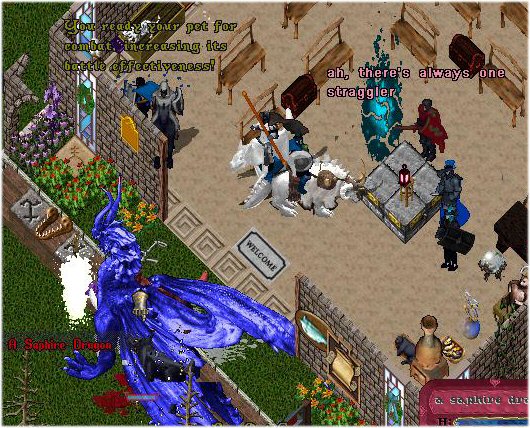 Commander Bhaltair: I’ve never seen a guard fall so easily. hopefully none will follow through the gate ah, there’s always one straggler. I hope this house is fireproof *sends healers to tend the BBQ* 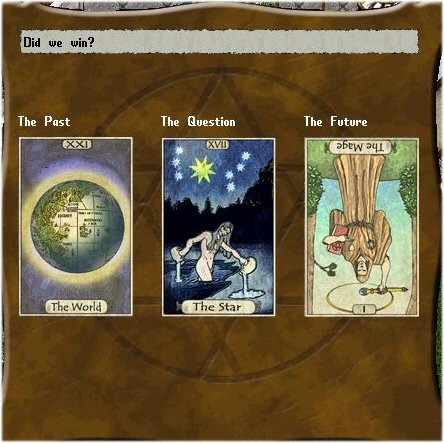