From Stinky Pete of Siege Perilous

It’s that time again. A time for bribery, tyranny, and the most vile, villainous acts to befall Sosaria. That’s right, governor elections! Normally, this display of the darkest act of human nature would fit me well, but I will have you know that I hate all things political. The meetings, the feign kindness, and sucking up to our lousy king, it’s enough to make me want to vomit in my shoes, but I don’t wear shoes. This election cycle, the good people chose @nightstalker22 as our political hero. He is a good man, always fair, incredibly relatable, and a snappy dresser to boot. Normally, Barter Town goes unchallenged as the elected leader in Minoc for the people there are used to our sovereignty, why would this election cycle be any different? Little did our hero know, there would be trouble afoot.

A quick glance at the nominees reveals the issue:

This cycle, victory would not come so easily. We knew immediately that @Ceronis Liadon would be no issue, I have never seen him in Barter Town before and the good people hardly know him. Billy Buttons is a long-term resident and has always served Barter Town well, as a slave. He knows his place, perhaps this was but a temporary lapse in judgement, I shall speak with him later regarding this insurgence, but right now, we have bigger problems, and I’m certain Billy knows it. The one that had me awake at night was @Toshi.

Barter Town and Toshi have a bit of a history. Since his arrival to Sosaria, he has been gobbling up land near the Minoc moongate and he has been regularly paying his dues, so to say. Recently, however, he has been traveling with a rogue band of ruffians known as DRMA, a group that has become very large. I do not know much about them and what they stand for, but for whatever reason, they now stand behind our old town fool with numbers that continue to grow. They are rich beyond my wildest dreams and dress extravagantly. Minoc is a mining city, Barter Town’s generosity in sharing our mines with them is their lifeblood but their simple minds, I fear, will be easily swayed by these DRMA invaders with their likely false tales of epic grandeur and donated trinkets.

As suspected, the bribes began immediately: 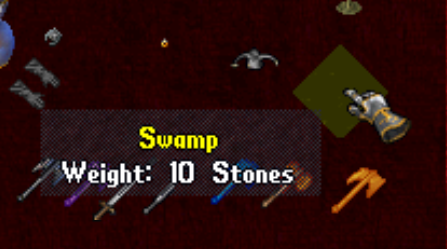 Cixix Cix began by giving me this lovely swamp tile but I refused to be bought…. Though I did keep it. 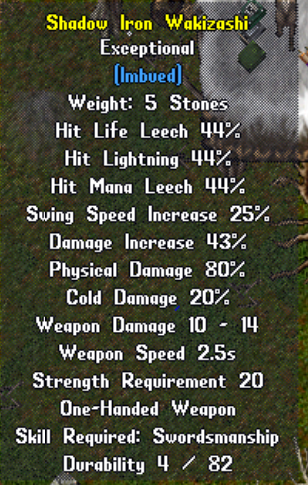 The Dark Knight gave me this lovely Wakizashi, the years of wear indicate that it is one of his favorite weapons.

Blitzkrieg gave me this SoT… A feeble attempt at a bribe for sure.

Spark gave me a pet summoning ball for the up and coming “Barter Town Pet Summoning Ball Garden.”

After his clowns failed to bribe me, he decided to handle things himself and tried once again to sway my vote by giving me his personal kryss! 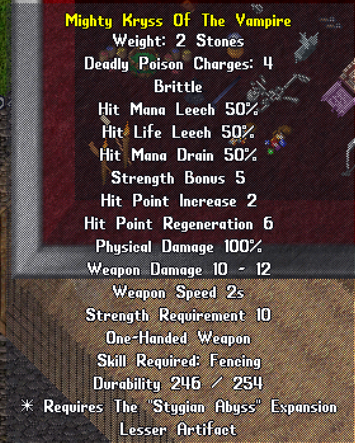 I may not have caved under the weight of all of the precious trinkets that this fool and his private army gave to me, but the good citizens of Minoc just don’t have the same iron will as I do. In the end, we lost the election but rest assured, Barter Town will not be defeated so easily. We will regroup and be back again. Toshi may have taken Minoc, but he cannot take Barter Town and all that it represents. The good citizens of Minoc will see through this fool’s facade in time and an uprising will begin. You can bet your bottom gold piece, THIEF [^_^] will be at the helm!