“Don’t trust wisps,” I said. “They’re the ones interested in that Armageddon spell.”

Nevertheless, the gathered of Our Sosarian Realm listened to the wisp, as it told us how to travel to another place, to help foil the plans of Minax. Signposts and pillars had appeared around the realm, each of which held a letter to the secret word for using the vortex cube to travel to the location that was out of time and space.

Below are the locations of the signposts and pillars, and the letters.

Xorinite Wisp: The Lava Flow of Ilshenar did not cut off the Eastern Sign Post until long after the Shattering – Southern part of Montor (eastern signpost) Y

Xorinite Wisp: After the Shattering, the Grave of the Lost Soul sank into the Ankh Dungeon. – Ankh dungeon in Ankh room T 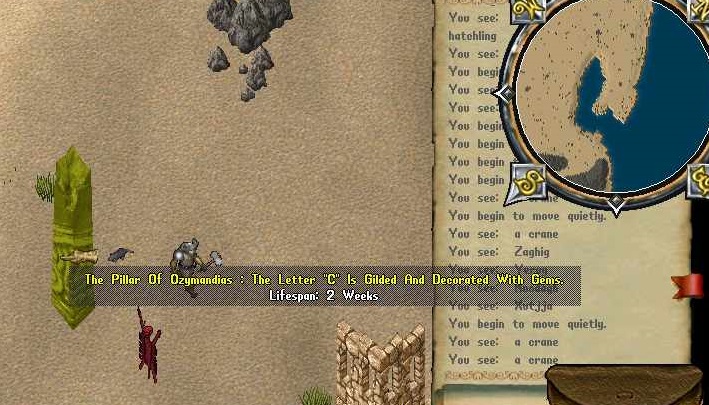 Xorinite Wisp: Yomotsu supplicants still pay homage to the Argonauts the Pillars are named after. – Just outside of Yomatsu mines (pillar of Argonauts) U

Xorinite Wisp: Greyn Grinswind found an old Sign Post and placed it on the north-most part of his lands. – Unicorn Kirin Fountain D 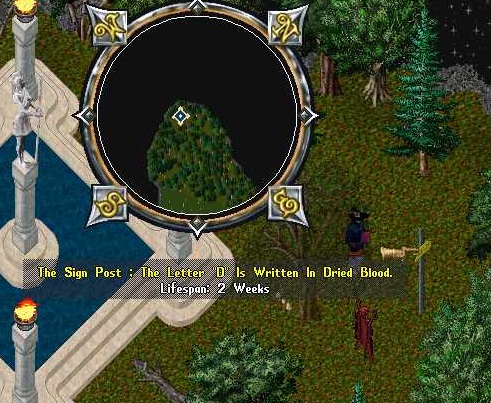 Xorinite Wisp: Many have been misled by the Southern Sign Post of the Malas Highlands and have died of thirst. – Malas desert south of Umbra (southern signpost) A 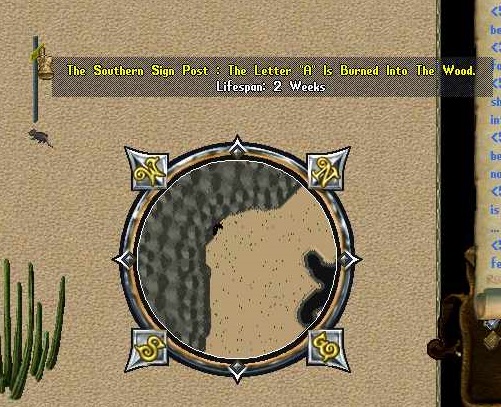 Xorinite Wisp: Long ago, a paladin brought a Pillar of Protection to his city and placed it on a Sandbar. – Trinsic barrier island D

Xorinite Wisp: Many Ancient tomes are held in the vaults that protect the Book of Truth. – Lyceum basement book on floor A 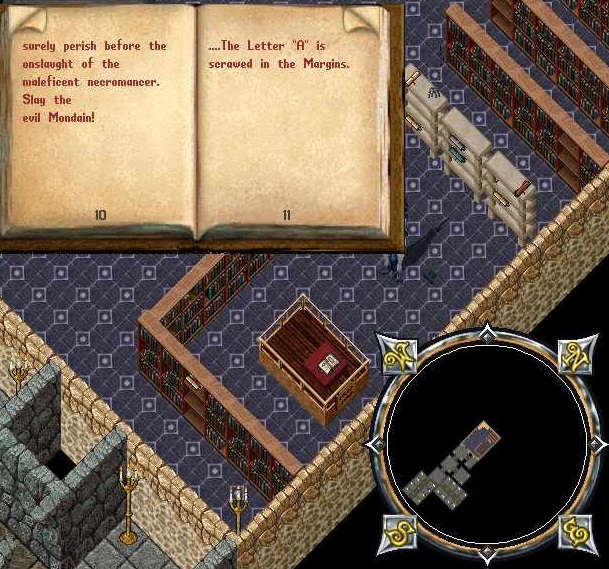 What does the spell? Supposedly “audacity.”

“Audacity” took us to the spot where Hawkwind performed a ritual with the gathered gemstones, to open a nascent gate which… did not go anywhere.

There is more to come. Times they are a-changing.

{Transcribed word for word from a book left in my mailbox by Linda.}

Reporter’s Note: Elder EM Crysania told us during the event that the D at Grimswald Fountain was supposed to be an I. Retired EM Seppo made an error when creating a code for one of his events, which was immortalized in the player-written book 2+2=3 (Seppo’s Song) written by Fern Goodfellow. This article is her book written with understanding and affection.