My Not-so-triumphant Return To Ultima Online

I have returned to Britannia from an extended break only to remember how tedious and time consuming everything can be. Ultima Online is known for repetitive clicks to do everything from training skills to crafting. Many times, the constant clicking seems more like work than like playing. More times than not, the time and effort put in is not worth the gold/loot received.
Fishing…

One of the first things that I did upon returning is launch a boat and go fishing. I immediately headed towards deep water so I could try and fish up a (MIB) Message in a Bottle. Fishing is simple but a perfect example of a tedious task. You double click the fishing pole then click the water you want to fish in. It took about 13 minuted to pull up my first sea serpent but it did not contain a MIB.

After about 50 minutes, I fished up my first one. I double clicked the bottle to access the (SOS) Waterstained SOS. If I had been luck, it would have been an Ancient SOS but alas, it was a normal one. I then clicked it to reveal it’s location and plugged the coordinates into UO Automap. UOAM is not as reliable as it once was but it has held up to an extent. It would take me as long to sail to the SOS area as it would to sail to land, dry-dock boat, recall to a closer place, launch ship, and sail to the area.

Fishing Up An SOS… 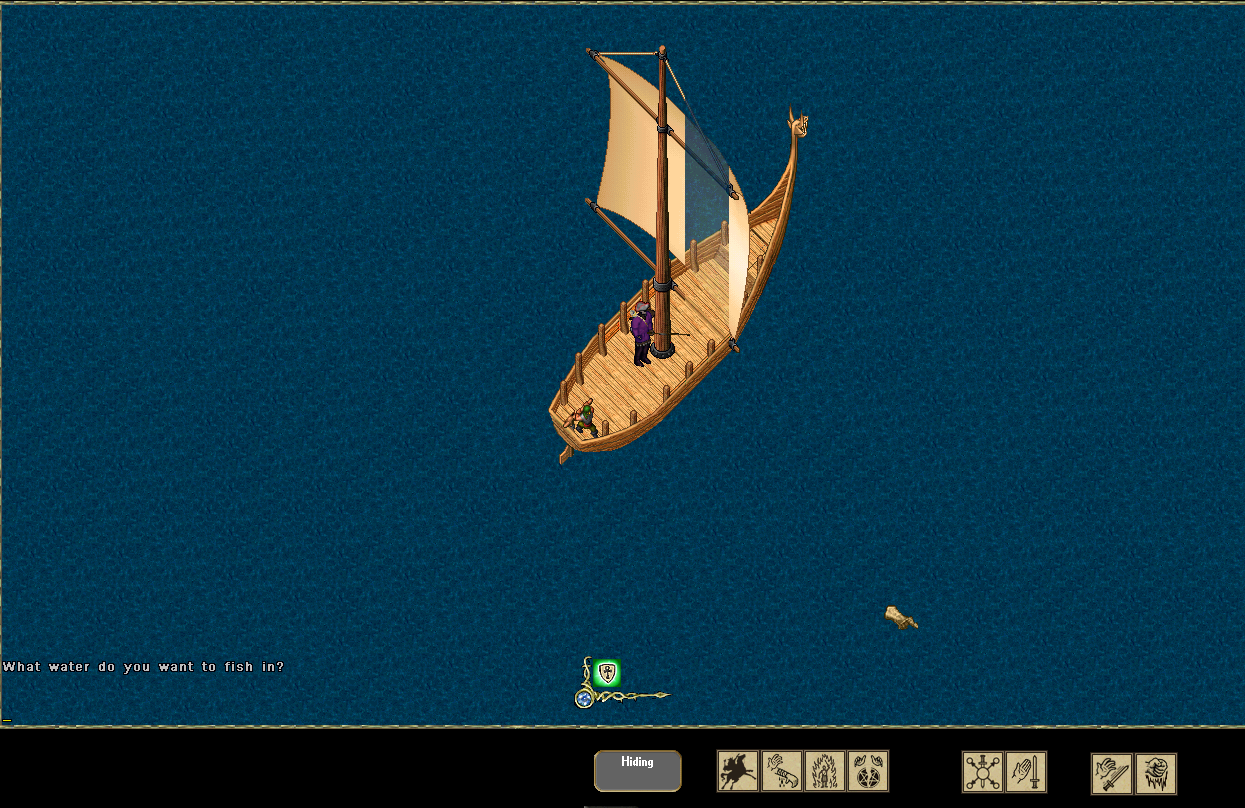 Fishing for a Message in a Bottle.

Once I arrive at the given coordinates, I start to fish. When fishing up a SOS, you have a chance to fish up wreckage in the form of different deco pieces marked from a shipwreck. It is completely random, sometimes you will pull up 20 pieces and other times nothing. This was one of those times, I pulled the chest with the first cast. There are 4 different levels of chests to pull up, each higher one has more loot and 10,000 gold per level. I got a level 1 chest so 10k gold, a few gems, scrolls, and loot. From start to finish, it took me 75 minutes and all I got was about 14,000 gold once I had sold everything.

Pirate Bounty…
I decided to try my hand at capturing a pirate. You can get a decent amount of materials (ore, lumber, leather, and what not) plus a reward for capturing a dread pirate. I went to my bank to check my supply. I had my ship, ramrod, swab, fuses, match, and grapeshot however I was short on cannon balls and heavy charges. First I log onto my mule with Blacksmithing and make 200 heavy cannon balls. Then I have to log onto my other mule with Alchemy to make the heavy charges. When I go to make them, I realize I do not have enough black powder. Now I have to make 400 black powder to make 100 heavy charges. 15 minutes later, I have my black powder so now I need to log back onto my first mule that has Tailoring so I can make them. 5 minutes later, I have my heavy charges and am good to go. I grab all my supplies, head to the docks and launch my boat. It takes me about 10 minutes to get to to the Floating Sea and I go and get my bounty quest. It has now been about 25 minutes since I had decided to capture a pirate. 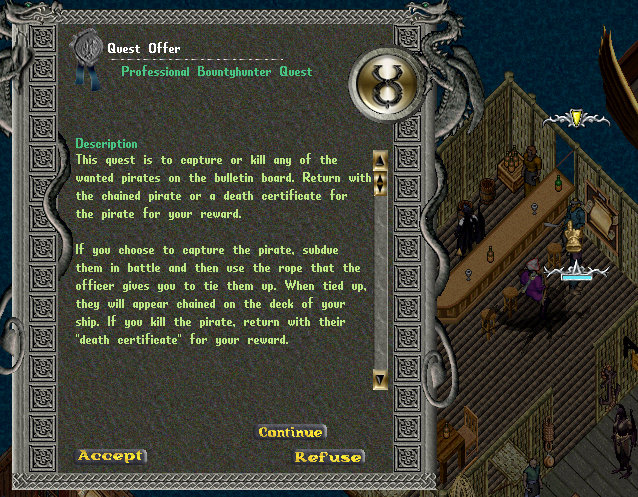 Listening to the chatter in there, I soon here the suspected location for a pirate. Quickly, I boarded the Velvet Elvis and set sail towards the last known location of the pirate. Sailing for what seems to be hours, (about 15 minutes) I spied a ship in the distance. As I close in, I soon see that it is only a merchant ship and my excitement dies back down.

Deciding to keep going, I sail for another 5 minutes before finally seeing an Orc ship in the distance. I man the cannon and tell my pilot to close the gap and I begin my attack. Starting out with a few volley’s of grapeshot, I soon cut down the crew and switch to cannon balls. After another 5 minutes of constant clicking, (clean cannon, load charges, load cannon balls, load fuse, fire) the Orc ship is scuttled and I can board it. As soon as I hit the deck, I realize 2 things. There was an Orc mage that I had not seen who started casting on me, and the captain I had killed, was not a dread pirate captain. I dispatch the Orc mage with a few high velocity arrows and loot the scuttled wreck.

My Thoughts Overall…
While it felt good to be back and see some familiar sights, I found that my hand and fingers were sore once again from the constant repetitive clicking. Each activity took me at 60-75 minutes to complete and the reward was negligible. I was never expecting huge riches and fancy shinnies but at the same time I did expect more for the time and effort put in. In a gaming world where players expect a lot, Ultima Online fails to come close. It is no wonder the players left are a dying breed.

My Setup: The Purest Paladin Ever