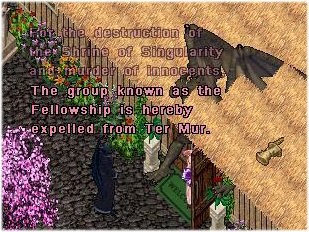 Arriving at the Brit Hall we were a little surprised to see a Gargoyle Messenger sitting outside the Hall, it makes you wonder if the secret entrance to HQ has been compromised?

Gargoyle Messenger: By order of Zhah, Queen of the gargoyle people: For the destruction of the Shrine of Singularity and murder of innocents, The group known as the Fellowship is hereby expelled from Ter Mur. Its texts and teachings are banned in all gargish lands, And all gargoyles should refrain from speaking their an-bal-sil heresy. The gargoyle Quan has been arrested to speak for past Fellowship crimes, And the Fellowship house he led had been destroyed.

Slipping pass the ever watchful Messenger outside we tapped the armor suit to enter the hidden HQ only to be greeted by a smell that would gad his holy lordship himself! The smell was so bad that your eyes would water, the only small relief was placing something over your noise and breath in and out of your open mouth. *There is a terrible stench coming from the leaking water*

Vixen: did everyone see the messenger outside??
Duncan: I did.
Kittie: yep
Duncan: Is that sewer water new?
Vixen: they are not happy with the fellowship nor us in our undercover IDs
Duncan: *lights a pipe* Got a bad feeling about tonight’s mission.
Vixen: I hope you are burning incest in that pipe
Duncan: Good old fashioned tobacco.
Malag aste: You’re lucky Duncan that you didn’t light those fumes…. 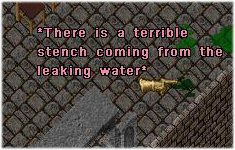 Were we glad when Magnus Grey and Sarah Paumera showed up, you could tell they were a little shocked at first with the smell but got straight to the point, tonight mission and not what we were thinking because of the Messenger, ney we were going to investigate the sewers.

Sarah Paumera: Good evening, everyone.
Magnus Grey: Any news to report?
Sarah Paumera: *smiles at everyone*
Vixen: Hello I have a report the a gargoyle outside with a warning and you have a leak
Magnus Grey: *frowns at the leak* Yes…that…
Kittie: *nods, plugging her sensitive nose*
Malag aste: Can we hurry up and get out of here?
Duncan: Leakey sewer and Ter Mur’s smarter then us apparently.
Magnus Grey: That is an interesting question, Malag.
Malag aste: Call in someone to clear that up?
Magnus Grey: Ter Mur’s solution does show Zhah’s focus.
Malag aste: Sometimes having heightened senses is a curse.
Magnus Grey: There have been some strange reports coming from the Britain sewers.
: *There is a terrible stench coming from the leaking water*
Magnus Grey: You may have heard that this issue has caused problems under Castle Blackthorn.
: *There is a terrible stench coming from the leaking water*
Kromwell Farland: aye
maints magic: nods

Magnus Grey: While I’m told the matter under the castle are being dealt with, I would like to know the cause of the problems. And try to prevent damage to other places…like our headquarters. I’m going to send you into the sewers to investigate the problem and see what you can learn.

Malag aste: So you are saying you want us crawling around in the sewers?
Duncan: Worse things than sewers. At least there everything ya see ya’ve already seen before, eh?> *chuckles*
Magnus Grey: Yes, Malag. That exactly.

Vixen: under the city or under Blackthorn?
Stewart Little: I love the sewers
Magnus Grey: Under the city, Vixen.
Kittie: *wraps her nose in bandages.. to save herself from the smell*
Vixen: Gah *yick
maints magic: brit sewers “Sighs”
Redlow DeSule: What other missions are available?
Queen Lara: just a bunch of gators

Now the chief decided that we were to use the emergency exit and not the exit that we had used to enter the HQ. A brief moment while he mopped up the sewer’s water and then
he was ready to send us on our way.

Queen Lara: anything specific we should look for ?
Martyna Z’muir: Not that kind of investigation…
Magnus Grey: The cause of the flooding, Lara.

Magnus Grey: Just use the secret panel on the back wall.
Queen Lara: other than that
Malag aste: *sounding rather stuffed up* Think I’m good …
Duncan: I kept slipping on the water before.
Magnus Grey: As soon as I use this mop to move some of the sludge aside…
: *There is a terrible stench coming from the leaking water*
Devon: someone last week liked to play with explosives
Aridas: This sailor says, what’s a little stench, better than old fish guts

Good thing about having a back door that in the sewers, no one is going to use it to get in the HQ. After stepping through we found ourself on a ledge deep within the sewer. Several of us went right, others went left, but soon we all found the spot where we were sure the main problem was. It was not hard to see, there were huge green footprints, something we seen before, and stacks and stacks of potions and kegs which we found were explosive potions. 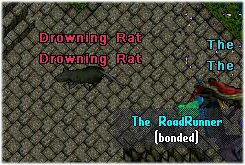 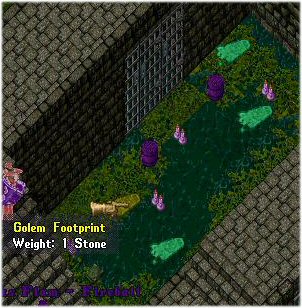 *screams from down the grate* maints magic: fellowship book down by exploding potions
Kittie: There’s someone down there! Duncan: “Where?” “Oh damn it.” Kittie: *points to the grate* Blacktooth: *sinking in the muck* A muffle cry could be heard from the gate area, so several sought access to the area, wow an old (not Friend) of ours from the battle at Cove a while back, Blacktooth. Once free we also faced dangers ourself.

Blacktooth: We were having dinner…water flooded..
Duncan: “Do we know this guy?”
Blacktooth: *grabs and pulls self out*
Duncan: “There ya go.”
Kittie: There you go! 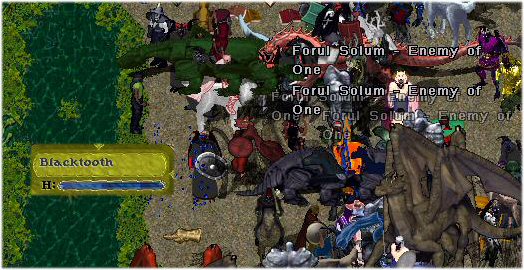 Blacktooth: I know you…but don’t let me die! *climbs out of the sludge* *struggles to catch breath* *coughs up muck* *looks terrible*
Kedias: have we found the source of the stank?
maints magic: smell not so good either for your information
Blacktooth: I can breathe again.
Kittie: Told ya! *smiles
Duncan: Not sure yet. Maybe? So if I’m remembering this right you’re a smuggler or pirate or something.
Blacktooth: I thought I was dead… I am retired, but I was a pirate. I believe you got me in Cove.
Duncan: Then what’re you doing in the sewers near some explosion potions.
Blacktooth: I was part of the Fellowship Release and Work Program. But they were odd, so I skipped work detail. I joined this group of beggars here. Are they okay?
Deavous: seen some dead bodies
Vixen: what with the books here??
Stewart Little: what beggars?
maints magic: we have not seen people alive here
Blacktooth: Oh. They were good people who shared what little they had. Mind if I ask that you bury them? They are Britain’s people, so some nice plot of dirt nearby?

Well Blacktooth was one smart devil, not only did he get us to assist with a future rescue of a friend of his, Mole, but showed us where the exit was for this secret tunnel where they been bringing in the explosion potions, seems he knew a sap when he saw one and felt he needed to move along. To bad you could not see the look on one Itiale Silvermist face when a horde of guards and pets come running out into the warehouse. She was not happy at all.

Itiale Silvermist: *frowns* You are not part of us… 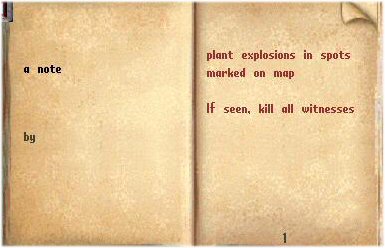 With those words she grabs a box, rushes outside the warehouse and set the box on fire. Only with luck were we able to see the note and the fellowship book in the box. She then summons imp like beasts to battle us and makes her escape.

We were a crew of individuals that were in great need of baths, we smelled of sewer and smoke when we returned to HQ to be debriefed. I am sure the Chief was very glad to wave us all off with his finally good night.