Magnus Grey: Good evening! Welcome to the Royal Security Advancement Ceremony! We hold this event twice a year to celebrate your hard work and accomplishments. As spymaster and minister of security, I know your work very well. But often, our work is secret even from the rest of those present. I want to celebrate your work. And I want you to take part. I will mention an battle, mission, or heroic act this group took part in. I would like you to raise your hand if you took part in that operation. 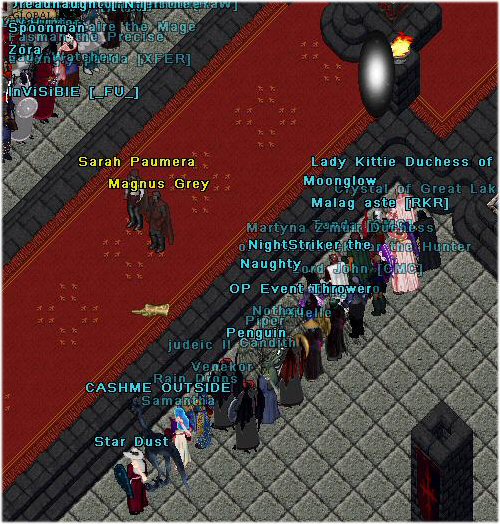 *Of course we were ready, but we really did not expect a pop quiz, or we would have study for it.* *Hands went up and down all thru the long list of feats the Royal Spies had done*

Worked to stop the criminal conspiracy of the Pauper and False King. I know some of you were there.

Part of the assault on the Temple of the Abyss at the end of the War of Shadows. Brought the Brothers of Valor to Justice before they hurt any others. Worked with the Library of Scars to stop an undead mercenary. Ended Hook’s Pirate War with the pirate’s death. Prevented the Papua zombie epidemic from spreading. Recovered the eight Moonstones of Vice. Prevented the An-Kal-Lem Void Queen from performing terrible blood magic. Stopped a traitorous Royal Spy from undermining our work.

Rescued me from Amir Mirza. Defended Britain and Crystal of Duplicity during the Battle of Britain. Stood in the gargoyle and human ranks during the siege of Ver Lor Reg. Protected the streets of Britain from the Snake and his poisons. Discovered the Dungeon of Time. Prevented the worldeater from consuming Lost Balema. Protected the King during the chaos of his early reign. Dispelled the lich rites of the Cult of Styx.

Learned the mystery of the Cirque De La Mort. Prevented paradox and dark magic from destroying Moonglow. Worked with our gargish allies to save Athenaeum Isle and defeat the Defiler. Took part in the Ouroboros expedition of the Malas pyramid. Helped the sick and dying during the Great Gargish Blight. Prevented Flain and the Black Badge from starting three wars.

Fought the Titans during the battles of the Shattered Obelisk. Were part of the expedition Against Khal Ankur. Defended the Silver Gate. Fought for the defense of humanity in Eodon. Killed the eye-collecting spider eidolon, Rythela. Brought down the Apex Triumvirate. Visited eight worlds to recover the blackrock prisms and defeat Mors Gotha. Stopped the first lich, Unthar, from rising again from his crypt. Avenged the death of Queen Dawn during the Shadow Crusade.

Ended the pirate conflicts along the Blood Coast. Restored the 666 seals. Stopped the Cult of the Fallen from regaining Mondain’s skull. Protected the Inventor’s fair in Minoc. Fought with the Silver Serpent in the Lost Lands War. Served as the King’s Justice in Cove, stopping the Britannian Purity League. Protected the world from the terrible spirits, Robin Redcap and Jenny

Kept order during the Time Between Crowns, despite having no official post. Stopped the Followers of Armageddon from bringing Zog back to life. Been fired by Lord Kendal. Defeated Virtuebane to restore Magincia. Forged a peace with Britannia and Nujel’m. Visited the Well of Souls and protected it from evil. Found the Lost Town of Dawn.

I could keep going, but I think you get the point. You have done amazing things for King and country.

Tonight, we say again the oath of the Royal Spies.

Please repeat after me:

This evening, three of our number will join the Order of the Shadow Serpent. Damia Terra, OP Event Thrower, and Zeke Terra, please step forward. Your good work is appreciated. You are an honor to the service. 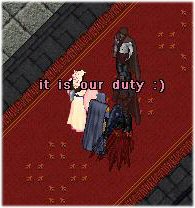 *All three stood tall and proud before him and one after another they were presented an item that reflected all that they have achieved.* *Next in no really order all there were called forward to accept a tunic that also showed the new rank of that person*.

*At the completion of the ceremony the following remarks were made and we were released*. 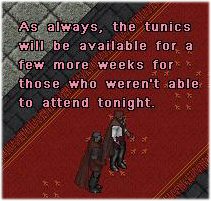 Sarah Paumera: As always, the tunics will be available for a few more weeks for those who weren’t able to attend tonight. I’m quite pleased that everyone qualified tonight.
*smiles* Have a lovely evening, everyone.

*Note: (Please do NOT put the tunic on a mannequin. It will disappear overnight.) (Also, if you transfer your character to another shard and then return,) (you will no longer be able to equip the tunic. They are shard and character bound.)

Jess The Cobbler’s Quest For The Power Of Sunlight