All there returned this greeting.

King Blackthorn: Welcome, welcome. Let us get down to business. I welcome you to this Council meeting! I trust all are well?

Not one to waste time during his meetings HRM continue. 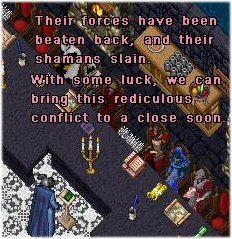 King Blackthorn: The war against the orcs seems to be going well for us. Their forces have been beaten back, and their shaman was slain. With some luck, we can bring this ridiculous conflict to a close soon. In other news, there have been reports of the seasonal egg-laying rabbits. I suggest you wear good boots, preferably with spikes in the toe and heel.

Now, as to matters of the crown. Commander Bhaltair tells me that the vile Exodus has reared its mechanical head again. Later this month, he will lead a team of warriors against the vile construct. You are requested to seek as many keys as you possibly can to his lair they tend to be found in the exodus dungeon. The assault will take place on a day bound to bring bad luck to Exodus. The cursed day – Friday the thirteenth! You see now why we need many keys – ideally, the assault will continue until we run out of them. The Royal Infirmary has agreed to supply healers. Very good of them, I am sure.
(Has a vision of Bandits marking the Calendar for 4-13-18)
*looks at another scroll*

Now, one of our scouts has brought word of a strange discovery. A previously unknown underground area has been discovered maps to it will become available in good time or perhaps a gateway. It seems that the orcs who have been giving us so many headaches of late have also discovered it, and are laying waste to the small band of Meer who live there.

When I have more details, I am sure we will call on the strong arms of our defenders. The Meer are good … people. We cannot leave them to the mercy of these orcs! But, the good commander will appraise you when we have more details. Now, to matters of governorship. How fare our towns and cities?

Greetings, Governor Kleman it is good that you have finally managed to arrive!

Kleman: well… you finally made it possible

King Blackthorn: Excellent! How so?

Kleman: much to late friends the orcs they wanted to send you a message through me..

King Blackthorn: You are on good terms with the orcs? Excellent! That could be useful!

Kleman: not any longer…

Kleman: you warred them so I have to say… I resign from my office

King Blackthorn: My good sir, they struck the first blows!

Kleman: cant work with this ways you will hear more from my friends *waves* (And with that final wave he is gone)

King Blackthorn: We tried to appease them, but they refused. Still, if your mind is made up

It seems we have a vacancy in Jhelom. Let the word go out!

(There were no shortage of Volunteers)
King Blackthorn: Well, I will give all applicants until the next meeting to prove their worth. Bring proof of support to the next meeting, and I will make a decision then.

(Before HRM could ask for his reports the Rep for UWSP township had his hand in the air, of course, HRM would recognize this right away as it had to be important.)

Tanager: *shuffles papers*
King Blackthorn: every citizen is welcome to run. I would suggest that you state your case publicly, and bring the results to the next meeting.
Taylor: *claps*

Lavender: That sounds excellent!
King Blackthorn: I will hear every applicant’s proposals, and judge accordingly.

Blind Otto: We cannot compete with this ore-munching fiend, though we dig for all we’re worth!
If it is not soon slain, the tunnels it digs will soon overrun the land!
King Blackthorn: it eats ore AND carrots?

Blind Otto: Minoc’s houses already tremble, soon they’ll collapse, lost beneath the sand! So, oh king, I do humbly ask thee, send they guards, thy finest weapons of war, and put unto death this ghastly Easter Bunny, lest Minoc shall be – no more! On a brighter note, there’s 25 million gold in the coffers. Thank you.
King Blackthorn: *sighs*
Sarah: *smiles*
Kenzie Mori: *remove the cotton*
King Blackthorn: I did say earlier, the solution is to wear spiked boots.
Tanager: *claps*
Talia: *head spins*
King Blackthorn: But, I shall send a guard or three to Minoc, just to make sure. *makes note to send animal tamer to Minoc*
Talia: actually, my lord, the solution for Otto is to wear *no* boots
King Blackthorn: Ah, now for our land’s sparkling jewel! Let us hear from Britain!

(The rest of the Governor present gave more normal reports, Trinsic and Skara Brae also reported contest within their reports.)

Starcon: I’m happy to report that Britain’s treasury has been holding steady at roughly 30 mil. Our trade deal, Bardic Collegium continues to be funded and will continue I must report, however

King Blackthorn: good, good *tries to ignore rabbit* Aye? What is amis?
Starcon: that we have had multiple citizens request that parade that has been going on since September end and the paraders go home
King Blackthorn: Indeed. They are a little over-enthusiastic. I will issue an order for them to move along.
Starcon: thank you
King Blackthorn: *stamps royal seal* A very favorable report indeed. Now, how fares noble Trinsic?

Sarah: Wonderful my Lord coffers are at 20 mil we have some very dedicated tradesmen

King Blackthorn: Good! Good!
Sarah: aye I have also asked for an ankh
King Blackthorn: *reads requisition order*
Sarah: to be placed near the north bank for the VvV
King Blackthorn: indeed! The paperwork does all appear to be in order. I shall see if our workmen have any in stock.

(Sarah then announced her plan to hold a VvV competition, more on that will be posted I am sure thru out the kingdom)

King Blackthorn: Now, how has life been in Moonglow of late?
Talia: Quite well your majesty. There has been no more freezing in the bay and many of our animals are coming out of hibernation.
King Blackthorn: that reminds me – how is your good mother?
Talia: Still salty sir and often keeps me from attending may of the events that take place in our lands
King Blackthorn: *nods understandingly*
Talia: Our coffers are slowly filling and while they are not as full as those of our other cities I still intend to have them full enough to cover trade deals through for the next term.

(We had several bunnies appear all over)

Talia: During these chill months of winter, I have been taking stock of my belongings and plan to have a rummage sale on my porch to help spur the growth of the town funds
King Blackthorn: well, watch the coppers, and the gold coins will take care of themselves!

Talia: In other news, the Siege Perilous Historical Society which has close ties to Moonglow has been conducting a series of interviews with the peoples of Britannia
King Blackthorn: *nods*

(For more on this please read Stratics Siege Forum.)

Talia: In Mongbat news, we have yet to pin point the entrance to their underground hive but we are more certain of it’s exitance than ever
King Blackthorn: hmm. Well, keep digging. Perhaps Minoc could loan you some miners?
You must be in stealth mode to use this ability.
(Bunnies were digging more and more holes all over outside)
Kenzie Mori: *Wonders if Serpent’s Hold is going to be like swiss cheese??*
Blind Otto: Aye! 1000gp an hour!
Talia: I fear than in Moonglow, our scholars are more bent on research and findings than they are on coffers and trade
King Blackthorn: *nods*
Talia: and it reflects in our town funds but money isn’t everything!
King Blackthorn: such is the way of scribes. But perhaps one of them could write a best selling book?
Talia: I think that is all. Thank you for your time!
King Blackthorn: A fine report. But do consider Minoc’s offer. Now, let us hear from Skara Brae!
Carrick McGee: Hail my King!
King Blackthorn: Greetings!
Carrick McGee: Skara Brae couldn’t be better! Despite starting governorship at 13k in the coffers
King Blackthorn: fine news!
Carrick McGee: we just turned 8million, I salute all that have been doing trade deals to help raise the gold. On a note, the trivia contest will be held on May 19th
King Blackthorn: it is good to know your citizens are pulling their weight!
Carrick McGee: It will be at the Nujelm chess board. Guard zone so all will be safe
King Blackthorn: *makes notes*
Carrick McGee: 1st 2nd and 3rd place will win prizes. No trophy’s for participation
Blind Otto: huzzah!
Carrick McGee: Cya all then! That is all.
King Blackthorn: Some fine ideas this night! Now, did Vesper’s governor turn up?
Kenzie Mori: *looks*
King Blackthorn: No? Sad. I hope they have a good reason! And I note Yew’s chair is vacant, too
unless that rabbit is representing? No?
King Blackthorn: Is there anyone here from UWSP? Motherlode? Gilfane? Safehaven?
Magichands: I’m here for UWSP Town your majesty
King Blackthorn: excellent!
Magichands: *pat rabbit*
(Magichands should have worn-ed a tux with tails and a top hat, that rabbit just ate it up. His report was of the Rabbits and the attacks at the township. Taylor another member of the UWSP also pointed out the recent loss of its healer there. The King expressed concern and promised to have another as soon as possible, HRM also asked that UWSP help with COLA (cost of living allowance) of the dearly departed healer’s family. Another member of UWSP also gave a brief statement voicing concerns of the governorship of Jhelom.)

Tanager: For as long as anyone can remember, Jhelom has been well known for its mercenaries, willing to hire their sword arm to forces of virtue and vice alike.

But now, Jhelom has fallen into disrepair and neglect. The United Workers of Siege Perilous have taken an interest in this once great city, and have been working to rebuild its empty coffers.

If it pleases the court and the council, I would like to run for the vacant seat as Governor of Jhelom. I will prepare my reasons and present to the council at the next meeting.
In the meantime *starts passing out Vote For Tanager buttons*. If any others wish to run please let me know so I can start digging up dirt – I mean *cough* work with you. Thank you, my lords and ladies

(My money err Vote is on Tanager! I cut this a bit short in some areas, but the main points were covered.)