An Antidote For Love?

Waiting for Harriet, I heard a dragon roar a warning. Running outside we discovered orc scouts attacking. No guards in sight, people attacked the spies. 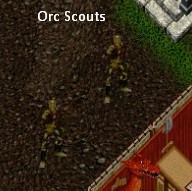 Irvin,a citizen, ran by shouting. “Guards! A murderer!” They quickly answered his call and soon there were guards everywhere.
​ 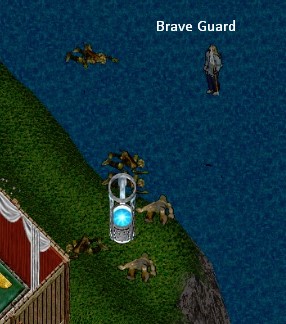 ​
The orc problem under control, we returned to the hall. Entering first, Jorvin the guard searched the hall and dispatched a spy he found hiding behind a curtain. Finishing his search, he escorted Harriet to the front returning to guard the door.

Harriet looked at the dead orc and shook her head.
​ 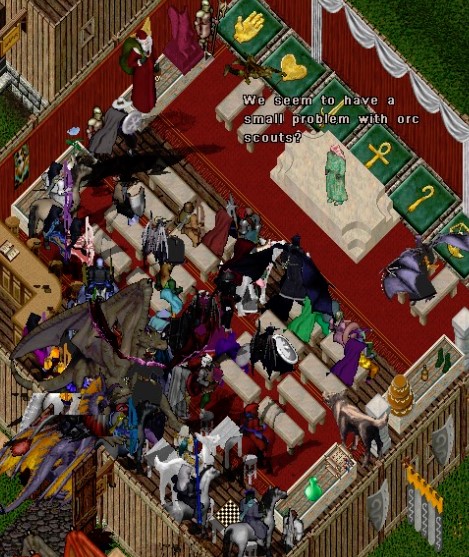 Elear winked, “Just a small one.”

Harriet frowned. “Seems to be a lot of dead ones.”

Harriet looked around “oh dear I was afraid of that. Hopefully the guards got them all.”

“But we did, before the royal guards arrived in a mass.” I added.

Crimson Avenger laughed, “The guards did their jobs.”

“Hmm oh dear.” Harriet studied the dead orc spy. “We must protect the King at all cost.”

“I’d hoped we took care of the jade orcs’ threat.” I said, “The prince must have taken over.”

“I guess we must deal with him.” Elear advised.

“It does appear that way, ” Harriet agreed. “I will be with you all in just a moment. Keep your guard up. Who know what else is sneaking around here.” Harriet went to talk to Jorvin the guard. I watched as he nodded and left.

“Hello guardians and citizens.” Harriet said returning to the front. “Thank you all for coming here tonight.

We shouted our greetings back…victory had put us in a festive mood.

Harriet waited for us to calm down. “We have been shocked by the results of the … love potion if I must call it that.”
​ 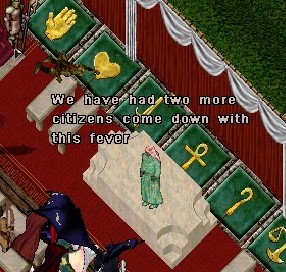 “Has Anna recovered yet?” I asked.

Harriet shook her head. “I hate calling it a love potion. The citizens’ symptoms are high fever, chills, nightmares, vomiting and dementia.”

“That’s no love potion Elear and I said at the same time.

Harriet scowled, “And it gets worse. Although not contagious we are keeping those showing symptoms in quarantine.

Harriet continued “His Grace, King Blackthorn has avoided calling any government meetings while he looks into this disease.”

Harriet looked at a parchment. ” He needs people to step up and claim governorships of available cities.
There are cities with no leadership at this time. We worry if this problem gets out of hand there will be on one in charge.
Those governors with seats who are active.” She paused nodding at Governor Mylene, Giles and me. “We ask to keep a lock down in place with curfews. We don’t know how the potions are getting to the public.”

The three of us agreed. “I will let my city guards know.” I assured her. “And the elves of Heartwood.”
​ 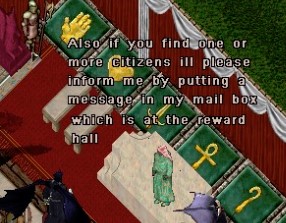 ​
“Please message me with the number of ill and how many guards you are requesting to be placed in your designated city.” Harriet requested/

“I will have the guards placed as needed per the King.”

I nodded and started a mental count…extra guards for the wine vats.

“What about cities without governors?” Elear asked.

“I do not know what we are going to do.” Harriet shook her head. “The King is taking under advisement all suggestion. Now with that said, I have important work for you today…Very important work.”

I turned my thoughts from guards to listen to what our new job was.

“We need to investigate the situation. We need to find a cure of an antidote.” Harriet explained. “The official word is we are calling this an antidote as the love “potion” we believe to be poison.”
​

Do the King’s healers have any idea what they might need?” I asked ready to take notes.

“Yes Tamais,” Harriet nodded. “We have some alchemists on the case. The Royal alchemist have been working around the clock.”

Harriet sighed. “Unfortunately they are skilled in alchemy and not in fighting or mining or cartographers. We, we must be the best we can be of all of those things.”

“We have citizens who are though.” I said.

Cathy Earnshaw looked around at the assemble crowd.

“At this time I am unable to accompany you on this task.” Harriet said sadly. 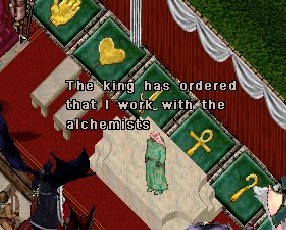 “As my talent for this is all I have to offer. I have worked on potions and medicines and cures for many, many years. Longer than many of you have walked this ground.” She added.

“Do we have a guide? Cathy Earnshaw asked.

“So please I beg of you, work together tonight.” Harriet implored.
“I will need at least one of you…if not more to write up a rundown of what happens tonight. Report all findings to me. Please be careful and on the lookout for orcs.” 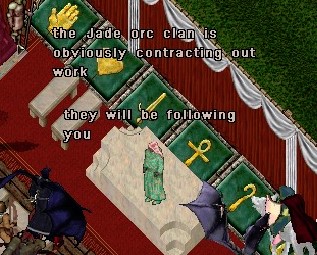 “Be award of your surroundings. They have high stealth.” Harriet turned to Cathy. “I am sending you first to see Alden the miner. He will tell you where to go from there.”

“To get to Alden, you must go north west of here. There is a mining area in the mountainside. Harriet pointed. “Please go quickly his life maybe in danger. Go now and please be safe. I’m counting on you.”

Several people knew where the mining area was and lead the way. We quickly found the cave…surrounded by orcs.

It didn’t take long to defeat the few orcs. Inside Alden paused to speak with us. 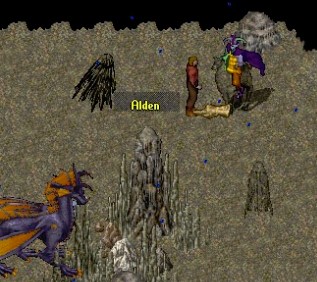 “Hello Alden.” I greeted him

“That’s me who would you be?” he looked at us suspiciously.

“Harriet sent us. She hopes you can help.” I explained.

“So you work for the king?” he leaned against his shovel. I looked around, “This is a mine?”

“Sadly yes, I am not the only one who mines here.” Alden sighed. “I’m afraid this area is all mined out right now.”

“Yes, but there is another place you might check.” Alden said. “It’s in that Samuri land Tokuno? You might be able to find what yer lookin for at the volcano there.”

I shivered. “Who do we speak to.

At Mt. Sho, we found Lee deep inside. He turned and studied us. 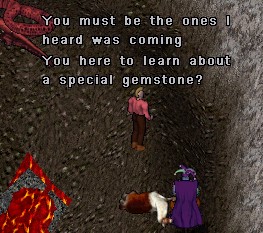 “Something to stop the Jade Orcs I hear.” Lee said thoughtfully. “Well I hear you need a counter-stone for Jade.”

Lee shook his head, “Yes, well you will need more than the halite,”

“Halite is the stone that needs to be found but you’ll also need seaweed. You can probably find a pirate in Buc’s den that can help you there.”

“I guess we go there.” I bowed

Reaching the bell, we received a message from Epona. “We are killing orcs!”

Carefully we entered the town, everywhere we saw dead orcs and a jade colored dragon.

By the bank we found Vixen Sonoma speaking to a pirate. “Hail Royce.”

“How to you know my name?” Royce the pirate demanded putting a hand on his sword.
Vixen motioned for his dragon to join him. “Lee sent us.” ​
“Eh, well it doesn’t matter. You looking for something? Royce kept his eyes on the dragon “Unless you need seaweed.”

Royce started laughing. “Got a Jade Orc problem do ya?” Been a long time since anyone needed any.” “And just what is the next ingredient?” Git Yo AZZ Down demanded.

Royce scowled at him. “Your gonna need to talk to Tony in Trinsic. See Ya!”

In Trinsic, we divided into groups to search for Tony. Song found him in the building next to the south bank.”
​ 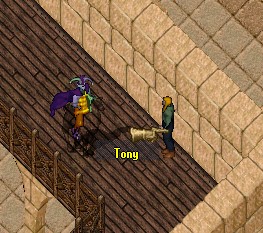 Tony didn’t return her greeting, instead told us his sad story. “I use to work on the docks then the Union went on strike.” He sighed. “I’m down on my luck. It’s tough…so tough.”

“That would be tough.” Song replied.

“Yeah sorry, its just been rough. So what are you needing? Got a job for me? He looking hopeful. “I can do just about anything. I am especially good at failing.” 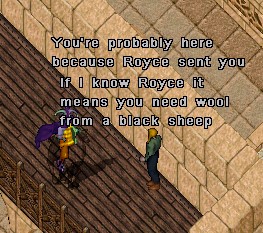 ​
“I reckon you should talk to Gina in Yew. She’ll be able to get what you need.” He sigh and walked away.

Worried about Gina, we hurried to the Yew Sheep pen. Good thing, Jade orc scouts and choppers were attacking the herders and Gina.

​
I found Gina sobbing. “Gina are you okay?” 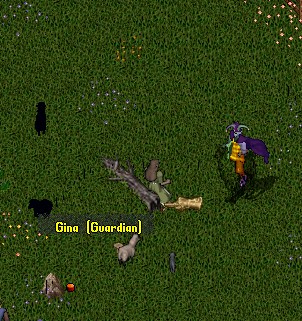 She shook her head, “I dream of running away. I cry in the night time. But it’s ok. I guess you are here for wool.”​ 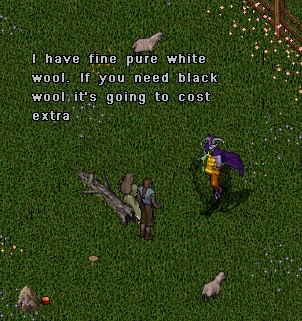 “It’s pretty rare stuff. It will take me about a week to fill and order.” she pointed at the three black sheep.

“Hum, a week will have to work for Harriet.” Song said.

“If this is for the King’s antidote, you’re going to need a scale from an ancient wyrm.
There’s a guy in Ilshenar near the Ancient Wyrm nest East of Compassion I forget his name.”

“You have no idea what his name is?” Song asked.

Gina shook her head. “Nope, no idea what his name is. Not like I head out there myself but you will need to go.”

The journey took us through the compassion’s forest past the gyspy camp. Going carefully we watched for Jade Orcs. We were not disappointed. Jade Orc royalty was guarding the passage way. It was slow going as we fought our way to the top. Finally at the top we found Elon. 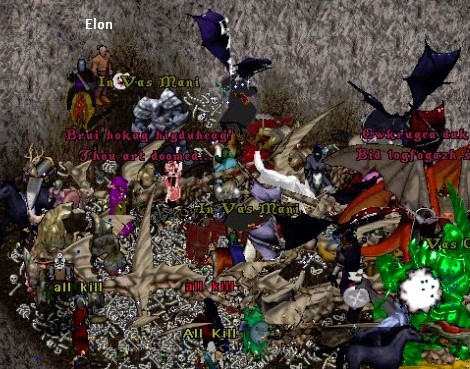 “Yep, I am Elon the expert wyrm wrangler. He bragged. “After you get the scale you need you’re gonna need to soak it in alcohol.”

Elon nodded. “yep any alcohol will do, but you are gonna have to soak it about a week. then after it’s been fermented good you can strain it out and discard the scale.”

“We discard the scale?” I interrupted.

“Yep, toss it but keep the strained alcohol. Yer gonna need it for this last part.” Elon replied.

Elon grinned “finally you need to grind up one of them glowin green crystals you get from the Emerald Dragon.”

I laughed as the tamers perked up. “An emerald dragon, I want one. I hear several say. 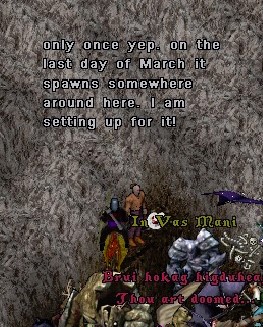 ” Yessiree I am gonna capture this dragon. Then next year I am gonna try and breed em!” Elon glared at the tamers. “I’m going have me some Emerald Dragon eggs, you wait and see. I’m gonna be rich!”

Elon smiled ” Yep and you can tell Harriet I will remember her when I am rich and famous . You’re gonna need to tell her to keep all the components apart until she’s ready I know the antidote she is trying to make.

I frowned, “I’m sure she knows that.”

“But this ain’t all she needs.” Elon urged. She’s gonna need the first rose of spring to complete the magic. Don’t worry she will now what I am talking about.”

Back at the hall I gave my report. “They said they will have the stuff for you next week.”

“Whew.” Harriet looked it. “I have the list of ingredients but it appears we need something off of this annual Emerald dragon. So I will meet you all here next week.”

I waited until the room cleared. “Oh and he wants to breed those emerald dragons. You might want to keep an eye on him.”

Harriet nodded. She left muttering “Silly man thinks he is going to catch an Emerald Dragon”

Hurrying to Yew, I put the curfew in place and I sent a guard to watch Gina. Not a safe time for a young girl to run away.

.*Note this was an oracle event. I’ve put the keys words in bold print. In most cases the last word is the key word.*

Defeat Of The Emerald Dragon