Disturbed, I left the brief meeting with the King. He was obviously upset that only Governor Myelen of Britain and myself were the only governors who came.

“Two governors are better than none I suppose.” He furrowed his brow, “Unmanaged cities tend to become chaotic.”

I had noticed that Ronan and Elessa had joined us. “Perhaps others might be interested in the postions. I looked hopefully at both.

The King looked over at them and nodded. Then looking at his reports, he gave us bad news. “There is an issue with orcs. There are orcs from a tribe know as the Jade Orc Clan. ” I am told they are uh…how to put this…testing their boundaries.”

“I’ve only heard of one or two scouts that were quickly dispatched.” King Blackthorn looked at the report. “Two in Trinsic and one in Jhelom. I am going to order Harriet to make a call to arms.”

Later I sent post to my many friends in different cities. “Watch for Jade Clan orcs and report sightings to Harriet.”

I had received no replies when the call from Harriet arrived. I hurried to see what she had learned. 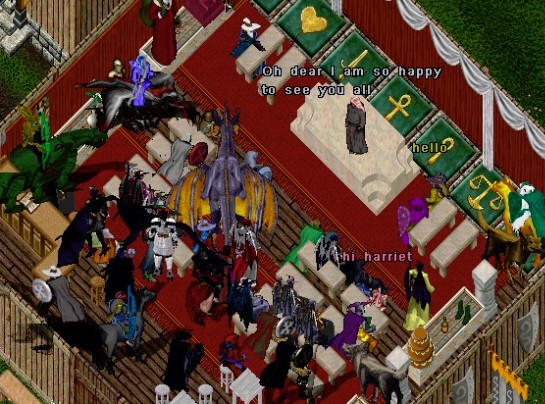 After the greetings from TOTO, Lesser Deamon, Starlynn, Ronan and me, Harriet began. “Let me fill you in on what is happening. The King has a young girl in custody. She is acting quite peculiar

“Well, dear how do I even begin.” Harriet said. “Of late there has been a rash break out of new orcish tribes.”

I nodded, “The King mentioned that.”

“The King didn’t think much of it, we know our history has a great vast many orcish type guilds and clans. They come and go and usually pose no great threat.” Harriet continued, “Not since the invasion in Papua have I seen so many orcs though. Some of you may remember Delucia was…well…introduced us to things like orc bombers and those archers. Orcs hadn’t had a history of using archery before then.”

Harriet shook herself. “But I digress. There is a tribe or clan rather of Jade orcs that have been pushing the boundary or what the King considers a boundary. He had asked me to look into it.” She paused, ” A few days later a young lady named Anna came to me in quite a fret saying she was in love with a Jade Orc prince.”

Harriet paused, “I should mention Anna is a human female.”

Shock filled the room. “And there is a problem because???” Asked Vixen Sonoma.

“The King of course hates the idea. Orcs are inherently evil creatures.” Harriet explained. “But she insist she loves him and has asked us to look for him.”

“Oh he would.” Vixen Sonoma grumbled. “And that is what they said about these Bats here. He pointed at the fanning wings of the gargoyles.”

Lesser Deamon agreed. “Would rather have orcs as allies than gargoyles.”

“But I fear how the others may react.”

Harriet waited for quiet. “So many orcs, I barely was able to keep up with them.”

“A magic spell she is under?” Cathy Earnshaw suggested.

Harriet nodded. “The King would like to know what spell the girl is under. For certainly it is rare for orcs and humans to be in love. And as well as we know, there is no orc prince…Not to our knowledge.”

“Stranger things have happened.” I pointed out.

“And orcs have been known to kidnap human children in the past – look at Trinsic’s history.” Basara added. “There’s no guarantee an “orc” is really an orc.”

“So investigations are in order.” Harriet told us. Be sure to loot your Jade orc corpses. There might be clues within. 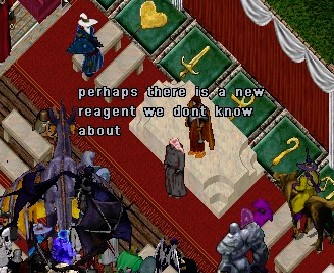 “And they are using it to cast a new spell.” Harriet advised.

“Hopefully everyone is here.” Harriet scanned the room. “It is a bit of a trek to get to where the orcs are stations.”

“Perfect.” Epona laughed. “Love when it is like that.”

Harriet smiled. We are going to meet at Honor Moongate in Ilshenar. Please meet me there.”

I arrived to find most everyone had beat me. 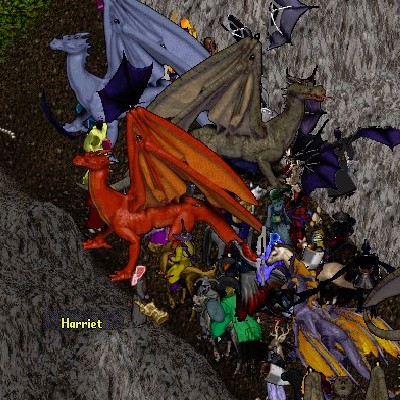 Harriet moved to a ledge so we could hear her. “We need to stay together. There are a lot of orcs. Please stay close to me.”

Quickly we gathered around her and headed up the road. After a bit, Harriet stopped looking lost.” I don’t have my scout. I may have to open us a gate.

Cathy Earnshaw smiled, “I love it.”

“Oh dear, I do get so lost here in Ilshenar. I handed Harriet my map. “Let us head south of here…Yes, this is the way.”

We hadn’t gone far when Epona shouted back, “I see orcs ahead.”

“I knew it!” Harriet shouted. “We need to get near the building.”

Sneaking in the building was not one of my better ideas. I was quickly reveled by an Orc scout. 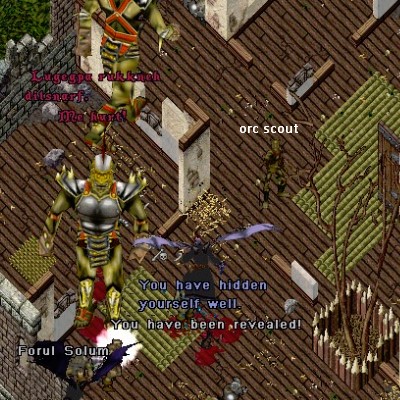 ​
After finding Charlton, a brave healer, I rejoined the group. The battle was fierce as we fought, orc brutes, lords, bomber, choppers and others.

I was busy healing, so didn’t see the raptor appear behind me, luckily Epona did. “Watch yourself Tamais, raptor was making lunch out of you.” She said healing me. Raptors under control of Jade Orc tamers….what next.​ 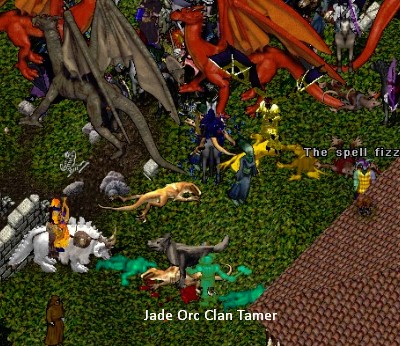 The Jade orcs attacked in organized waves. Having fought orcs before that struck me as strange. Who was directing them.
“ROOF TOP!” Shouted Ninja Tamer.
Vixen Sonoma and I both turned. Vixen looked up on the roof and almost fainted…The Jade Orc King. 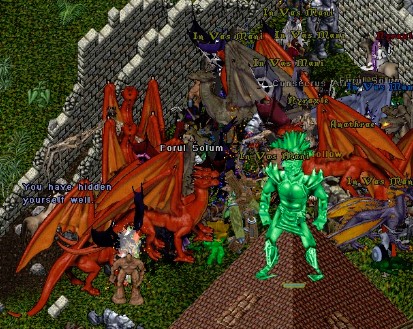 “He’s in the building guys, go get him!” Harriet shouted at us. But when we went in, he had vanished.

Outside Harriet called. “The King! On the Northeast wall!” We rushed out in time to see him jump off the wall and greet us. To our amazement he divided until we were fighting a mass of kings trying to find the real one. 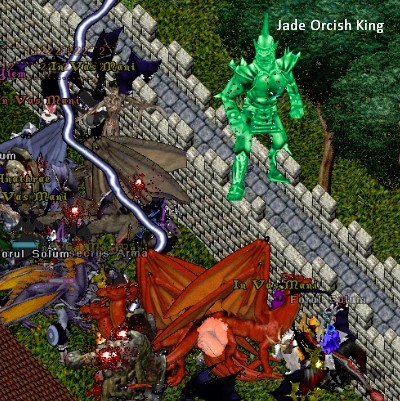 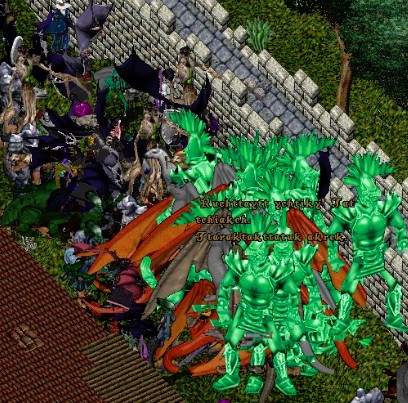 Defeated at last, people began to search the bodies. Epona found a jade vase filled with an orcish love potion.

Harriet studied it. “I think we know how Anna was tricked into loving and orc prince. I give this to the King’s Mages. 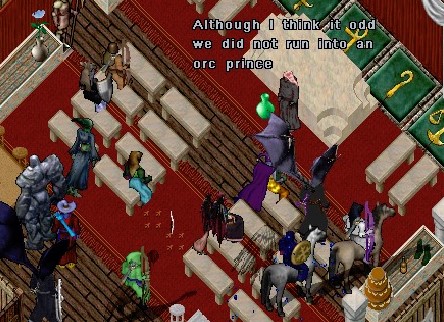 “Did anyone else notice an orc prince?” Harriet asked.

We shook our heads. “Just the king.” I answered.

“Nor I.” Harriet frowned. “I am quite concerned.”

“But if there is a king there could be prince.” I pointed out. “I’ve never seen an orc king before.”

Harriet nodded. “It seems strange that he wasn’t in attendance for our visit though.”

“It might be a good sign he wasn’t there…did want to be part of dad’s plans.” I mused. “Or he could have set up the ambush.”

“Hmm, I am afraid we may not have heard the last from our new orc friends.” Harriet said. “I will fill in the King. I will be calling you back soon I fear. “

I sat thinking for a while after she had left. The king was not going to like the news Harriet had…especially with so many cities without governors. 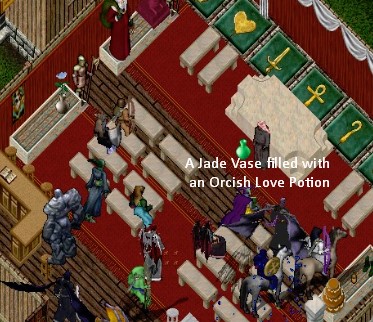 The Doom Train Of Baja