Anticipating news of the upcoming circus, the room was filled with noise. Most of us didn’t notice that Harriet had arrived until she shouted for our attention. 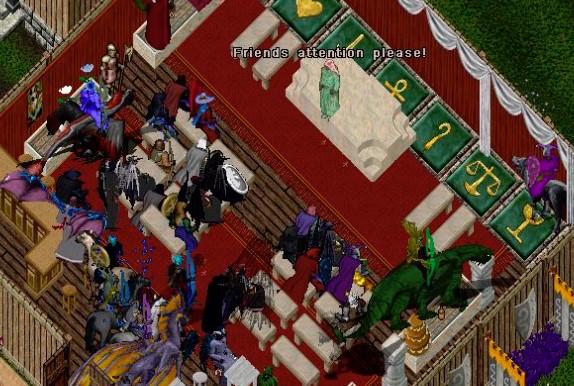 Rather than quiet the room, it now filled with shouts of greetings.​

While Meili and I said Hi together.

“Greetings,” Harriet replied holding Then held up her hands for quiet. “I believe we have found a traveling circus to perform for us.”

Cathy Earnshaw led the cheering that filled the room.

Harriet co, “Its very exciting,” Harriet smiled. “They have magic and aerial acts and animals too.”

Harriet paused, “But they have a request”

Several of us exchanged glances. That didn’t sound good.

Vixen Sonoma shook her head. “The other shoe.”

” A Few of the family are getting up in age and are looking for a place to settle,” Harriet explained. “Since they are carnival folk, they don’t necessarily want houses. So they’ve made a request of the King.”

“OOO, there is a wonderful open spot between Elessa and my Castles…perfect for tents.” 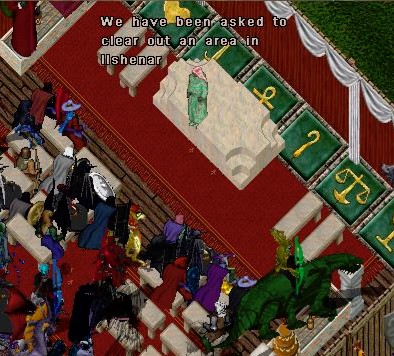 “It seems as though it has been overrun and should be cleaned out anyway,” Harriet told us. “Carnival family or no”

Overrun?” I knew I wouldn’t like the answer. “By what?”

“By clearing, killing all there or chop trees?” Vixen Sonoma frowned. “I do not do trees.. too much like washing windows. Another I do not do.”

Harriet ignored us and continued. “But when I sent out scouts to report back. They got lost…confused.”

Harriet nodded “It was quite strange. These are Royal Scouts. We are talking the best of the best here. Never should they get lost.”

“So we sent more to report on what happened,” Harriet informed us. “Those got ill too. If ill is the right word for it…confused…hypnotized.” 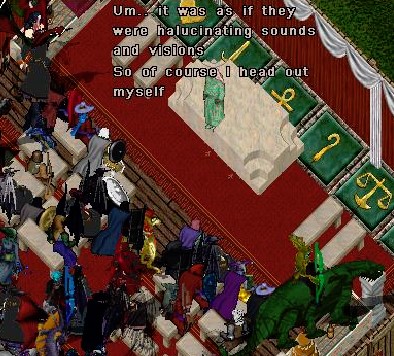 “You know me, I do not send anyone anywhere I would not be willing to go myself.” Harriet reminded us.

“And frankly you aren’t going to believe it until you see it with your own eyes. ” Harriet shuddered. “Swamp creatures by the hundreds.” 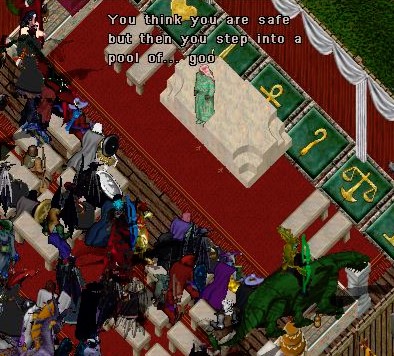 “And I believe that is what causes the visions and a kind of euphoria and not the good kind. If you get my drift.” Harriet told us. “The King wants the entire area cleared out.”

“Eeew, There go my new shoes.” I sighed.

“Oh, my” Cathy Earnshaw began looking for her swamp bow.

Behind I heard Skeptamystic counting his arrows. “Ok, 2500 good enough.”

“I am quite worried,” Harriet said. “I have hired some EMTS. I did a protection spell on them but I don’t know how long it will last. The healers are inside a cave nearby and also around the area as close I could get them safely.”

“Boy, I hope they are resistant to the stuff. Don’t want them to kill us by accident.” I pointed out.

“When we go watch where you step. Do not step in the slime. The slime is what will get you killed.” Harriet cautioned. “You will have visions of things that are not there. And that will cause you to miss the things that are there.”

“You should be careful.” Harriet ignored him. 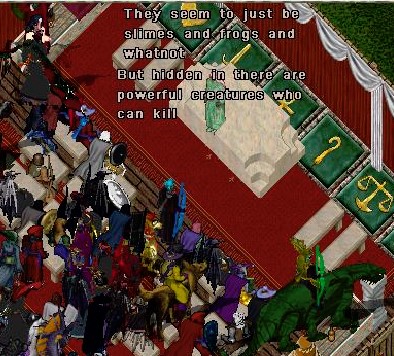 “Do not get overwhelmed. Stick together in parties of three or more. ” Harriet urged. “Please, this is important. It is a good place for a settlement If we can clear the area of …these hypnotic creatures or at least the slime that comes from them.”

Cathy Earnshaw asked. ” Do we use some sort of anti-slime when we clear it?”

“Don’t get hypnotized. It will ruin your day.” Harriet cautioned. “Are we understood? Do we know what to expect? And where to find the healers?”

“Yep, slime bad. Stay together. Healers in the cave. Got it. ” I said.

“I will gate us but my gate to this area will not last since it is Ilshenar,” Harriet informed us outside. ” Careful now. Help each other friends.”

“Now wait a minute, Tamais always goes first.” Vixen motioned for me to enter the gate. “Not me Kat.”

“Hum.” I wondered how I was given a special honor. I didn’t have to worry. Harriet led the way. On the other side, we followed her into the forest.
We began to run into swamp creatures…toads, slimes, swamp tentacles, and quagmire. The air seemed heavy as we went deeper into the forest. I began to see strange creatures…or did it. Could I trust my eyes?.

“Continue in to clear the area, my friends.” Harriet directed. “West along the swampy area there are some buildings ahead our new friends may wish to settle in.”

Slowly we worked our way to the buildings. Peaking inside one, I found it full of bones and lizardmen. Boy, not a place I’d want to live. 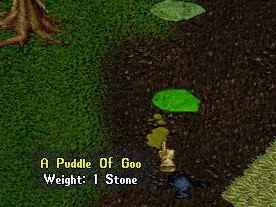 Careful not to step into the many puddles of goo Harriet warned us about. I hurried to join the others before I was surrounded by the strange creatures.
​ 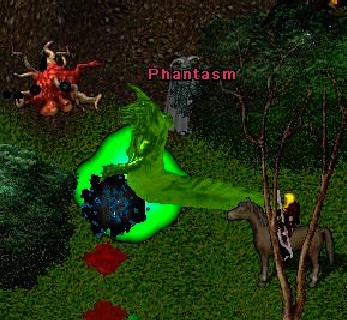 It wasn’t long before I found the flaming acid left by Nightmares…their blood? Going to the cave I found Harriet.​

“Oh dear, there are more creatures than I expected. You are doing very well friends. Remember to avoid the slimy stuff.” she shouted. “You can go in the cave to be healed, friends. It is a safe place.” Then noticing the acid burns in my shoes, she added. “CAREFUL DON’T STEP IN THE ACID EITHER!”

Vixen Sonoma joined us to heal her dragon. “Dang acid takes them down fast…wish we had such an attack.”

The longer we fought the stranger the creatures became. We slowly cleared the village moving towards the cliff.
​ 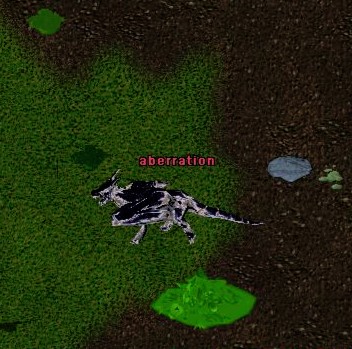 Killed by a death vortex, I missed seeing the master of the creatures. Returning to the battlefront, I only found the carnage it has caused.

Returning to Yew, I ordered yet another new outfit and pair of shoes. My tailor and cobbler, while happy for my business, sighed when they saw what remained of my outfit.
I heard one mutter “The governor goes through clothes like water. Why do we bother giving her our finest work.” Blushing I hurried to the abbey before going back home.

The Village Of Stormguard Festival