As normally, the King starts the meeting.

King Blackthorn: Greetings, governors and citizens! Please, be seated. There is much to discuss, and little time. You may have noticed black flames attempting to bar your way when you arrived. 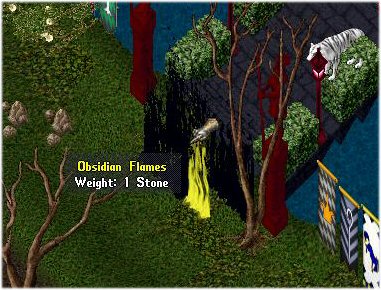 *gestures out the window*

They appear harmless, but the one who left them there is not. Some fool of a barbarian has been seen in and around Delucia. He claims he is the region’s new lord. Normally, I would leave him to be eaten by wolves, but he has a powerful artifact.

We are still gathering intelligence, but his reign will not last the month.

He is treating the locals with utter contempt and apparently refers to the local orc tribes as pansies. We will put a stop to his antics, and reclaim his artifact, mark my words.

In other news, my mages tell me that later this month, the stars and moons will align, causing strange moongates to open to various unusual places. We will try to capture these gates, and bring them to a central location for study. Enter them at your own peril! *looks ominous* 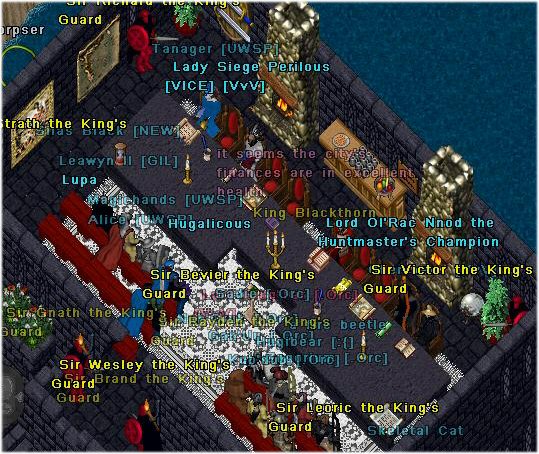 I am sad to report that vandals seem to have sabotaged the great casino.
Silas Black: omg
Magichands: !!!
Silas Black: say its not so!!
Blug’Tar: *looks innocent*
Siege Perilous: *slams fist on table*
King Blackthorn: Indeed, the most anyone has won there in the past year is one gold piece which turned out to be a fake.
Kenzie Mori: As long as they do not take me Tanager roof top I will be good

Silas Black: *looks towards Orcs*
Cherokee: The Casino/\….
King Blackthorn: My workmen are composing reports as to what needs to be repaired, and preparing cost estimates. Hopefully we will see it up and running again soon. Now, shall we hear from the governors of the land? How fares Jhelom?

Tanager: Something wicked this way comes! For Jhelom, the town is doing well

And is prepared for whatever evils this creepy month may bring

Nothing else to report, although I do have a question, if I may?

Tanager: It seems the normal elections were not held last month. And the next are due a bit earlier than usual. Do you know any reason for this?

King Blackthorn: I am led to understand that the meteorite that was found near Khaldun affected the calendar there is nothing worse than a caddelite infused calendar
Silas Black: makes sense

Magichands: lol
Tanager: Ah, I see!
King Blackthorn: But! Rest assured, our mages are working to fix matters
Tanager: Knocked Sosaria a degree or two off her axis, did it?

King Blackthorn: Indeed! We have our heaviest mages jumping up and down on the counterweight island to rectify matters.

Tanager: In that case, no other questions, lords and ladies of the council

King Blackthorn: indeed. You will note that the meteor has affected the local wildlife
approach with caution. Now, is the governor for New Magincia around? And if so, does he live?

Blug’Tar: HOOWAH
Siege Perilous: he was on earlier
Sadie: Hoowah!
King Blackthorn: Lord Ironfist? Has anyone seen him?
Gan’Uu: **snort**

Blug’Tar: Lasd me see dat ash him runnin awey.
Tanager: I saw him breifly as I died to another heh
King Blackthorn: it seems the city’s finances are in excellent health. I can only assume his absence is due to his fund raising efforts. So, let us hear how matters fare in Minoc! *smiles*
Siege Perilous: sir, good evening sir.
King Blackthorn: *nods politely*
Siege Perilous: a donation has been made to Minoc from the proprietor of the casino
King Blackthorn: *raises eyebrow*
Siege Perilous: *slams fist on table* the damn dungeon is broke, the rewards are broke
Kub’dub: *chortles*
Siege Perilous: when is it getting fixed?
King Blackthorn: Indeed? I shall send scouts to investigate, and alert the appropriate workmen.
Siege Perilous: i have nothing else *slams fist on table*
King Blackthorn: I suspect the cultists down there are causing the damage. But, it will be looked into.
Kenzie Mori: hummm
Kub’dub: dat ash am sassy
King Blackthorn: *lobs royal pigeon out window*
Blug’Tar: har har
Tanager: *watches pigeon get munched by overgrown mongbat*
King Blackthorn: *quietly scribbles note to Workman Kyronix, drops it through a tiny moongate* Well then, I hear that Governor Starcon has been waylaid by pirates.
Silas Black: yikes
King Blackthorn: But, the coffers of Britain are in excellent condition. Why, when I went for a quiet visit earlier, the townsfolk made me a new coach, solid gold! *looks at other governors expectantly* But, Trinsic is not doing quite as well. Where is governor Sarah? *looks under chair*
Kenzie Mori: vacationing in Southern Trinsic at the beach??
King Blackthorn: *puts a red X next to Trinsic* It would appear that Moonglow, Skara Brae and Vesper’s governors have joined her on that beach! *signals to guards to inspect sand dunes*
Magichands: Vesper is there
King Blackthorn: aha
Tanager: blending into the shadows

King Blackthorn: so he is!

Ol’Rac Nnod: Hello counself , and me’lord
King Blackthorn: An excellent disguise, sir. You blended in with that chair most expertly.
Ol’Rac Nnod: Not much to report this month coffers at around 7 mil
King Blackthorn: *nods, makes notes*
Ol’Rac Nnod: bardic collegium trade continues. I do request to be friended to this meetin’ hall when ye got a chance.

King Blackthorn: *hands small key* Done!
Ol’Rac Nnod: Outside o’ that , that’s about all I got this month sire hehe
King Blackthorn: It is the quality of the work that counts, not the quantity. Well done.
Kenzie Mori: *notes it the key to wash room*
King Blackthorn: And now, the loyal governor of Yew, where I hear sheep rustling has dropped by 75% In unrelated news, the outlaw Kelmo has been clapped in irons
Hugibear: hes been sheep hustlin

Cherokee: Yew is doing good and running smooth. no sheep involved I have notified the guards to keep a look out for Orcs and to keep the undead confined to the cemetary.
King Blackthorn: Good!
Cherokee: I also have the Ye Ole Winery running at full capacity , and putting away a special reserve of 12 year old spirits

King Blackthorn: Would it help if others donated empty Bulk orders to you, and if so, where should they bring them? (or full ones)
Magichands: We have a house next to our market that is all for the festival there are mailbox there
King Blackthorn: *nods*

Magichands: where people can drop
King Blackthorn: good, good
Magichands: bods or everything they want donate for the festival for the rest nothing more to say my Lords. Thank you very much again
King Blackthorn: I am sure the generous citizens of the land will support your worthy cause and efforts
Magichands: yep
Tanager: *smiles*
Magichands: and it’s all for our Siege
King Blackthorn: very well. Does anyone else have anything else to report?
Siege Perilous: *slams fist on table*
Tanager: *giggle*
King Blackthorn: *fills requisition for table repairs*
Kenzie Mori: *notes if Blind Otto was here he would be very awake*
King Blackthorn: well then.All I have to say is that this month, there will be many beggers about. Remember the virtues, and be charitable to them
Kenzie Mori: *is sitting traps for those little beggers now*
King Blackthorn: But not too charitable. Last year several died of sugar poisoning
Magichands: so give with a hand food and the other hit with a sword?
Nub’Gruk: gib to fatten, then eat

King Blackthorn: Charity begins at home, after all, so if you have any beggers in your house… well, I leave that to you. If there are no other points for the council…? I declare this meeting adjourned*whacks table with a small hammer*

Meeting Of The Governors Of Siege 1-6-18