Absent:
Gov Britain, also absent but current events we all know why.
Gov Skara Brae, Has been absent the entire year, yet is running for office again!
Gov Jhelom Empty seat, please Petition the King if you wish to be a part of this!

HRM started the meeting.
King Blackthorn: Good evening everyone! Glad to see you all here! Please have a seat. So as usual let us go thru the city reports. Sonya what have you to report on New Magencia

Sonya Kristoff: Sire the City of New Magincia reports that the city coffers are in good standing
That ability does not seem to work here. Although there was an issue during this election cycle where my name was removed from the stone, from the election
King Blackthorn: Oh? I will have to inquire about that

Sonya Kristoff: otherwise there are no pending issues or events to report Thus ends my report

King Blackthorn: Ok. Meche what have you to report tonight?
Meche: good evening and well met. I am pleased to report the city of Trinsic’s coffers are overflowing, our townsfolk are eagerly awaiting the arrival of the artisan festival in hopes that we can bring forth a beautiful tree to gather around. Citizens reported sightings of Krampus earlier today but he was quickly dispatched but reports are he keeps popping up trying to kill our trade runners the call has been put forth to the paladins of the city to defend the walls incase he should appear again. Due to allegiances I shall be stepping down after this meeting and handing over the responsibility to my niece Trinsic Rose.

King Blackthorn: Does that conclude your report Meche? ahh my apologies! oh?
Meche: but she has been shadowing me for the last 4 months and i feel will do a fine job of taking care of our beloved city but it has been a pleasure serving with my fellow governors that concludes my reports sir
King Blackthorn: Very well Meche, I thank you for the service you have provided to the people of Trinsic and to us here
Meche: you are very welcome sir
King Blackthorn: Cinderella, what have you to report tonight?
Cinderella: well i have been hearing complaints from Kevin the Butcher
King Blackthorn: Oh?
Cinderella: it seems the ladies of the town has been singing the same Christmas song and he keeps arguing with them over the song, would you like to hear part of it
King Blackthorn: Sure
Cinderella: On the 12th day of Christmas, my true love showed me…
12 reapers reaping
11 gypsies tipsy
10 miners mining
9 peasants presents
8 crafters crafting
Rayce: *humming along*
Cinderella: 7 ladies babies
6 husbands hungry
5 golden pickaxe
4 stable stalls
3 fishers fishing
2 device of sacrifice
and a governor in her office 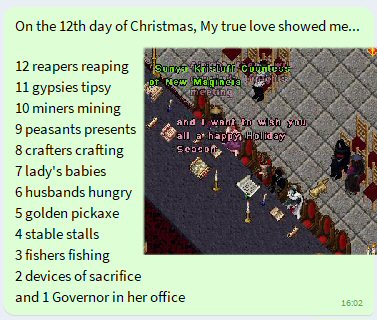 King Blackthorn: Thank you for your report Cinderella. Dezerai what have you to report on Moonglow?
Dezerai: I sent messages out but alas I see missing governors still tonight and I blame the holidays for the absent. I see Cinderella made it. Here is mine report, right now the city’s treasury balance is well over 900 million. The city’s buff is a +2 MR, Merchant’s Association. The Guardian of Moonglow, The Void Dragon stills sleeps. Chief Giggey is always on Duty to protect the Citizens of the City. Sadly the Goddess Mesanna, on December 2nd, turn down the request to return the banker, innkeeper and fisher to the Tower of Sorcery. So it is with sad heart that I must report that Lazarus the human fisher, Zanby the Mongbat Banker, and Reebon the undead mage innkeeper are forever lost but never forgotten.

Your Highness, if you were to petition the Goddess would she help with the return of our lost people
King Blackthorn: I will see what I can do. Let me write this down.
Dezerai: thank you . Voting for the Governors started today and will run for the week, by then we will (I hope) have a full council for the New Year. May the Lord watch over you all and
Have a safe and happy holiday, Merry Christmas and Happy New Years to all! Thus ends my report.

*NOTE* The Tower of Sorcery is not a player own house, it is a watch tower on the sea, that belongs to the Shard Sonoma, the owner’s name is Sonoma, Since the year 2005 it has been a part of this shard History, the Tower of Sorcery belongs to Broadsword! And we beg that Broadsword please help keep our history alive by returning the missing NPCs. Mesanna help us once before with the return of the Dragon Stable master. Please help again!

Dezerai: oh?!
King Blackthorn: so as to not completing them on Sonoma?
Rayce: as I said, I’m not sure what can be done aye
Rayce: seems sad really
King Blackthorn: I will pray to the goddess Mesanna for an answer
Rayce: I would think you would want to beautify your city
Dezerai: indeed
Rayce: I look forward to serving with you all

King Blackthorn: I guess I am next! On the 22nd we have a community Picture So spread the word! I want as many Sonomians there as possible! Let’s show our strength!
Rayce: may I ask what time please?
King Blackthorn: 7PM PST 10PM EST
Rayce: thank you sire
King Blackthorn: you are welcome. This year it will be done at the reward hall area on Malas

*Note* Other areas were voice as well as having others send in pictures taken at this event.

King Blackthorn: Alright, then I will conclude tonight’s meeting

The Perils of Deceit