This evening meeting was a bit short, and it was hard to get a count of who was who during the meeting. The Governor of Jhelom was absent but Joline Maza spoke for him. And the Governors of Vesper and Yew were both absent. 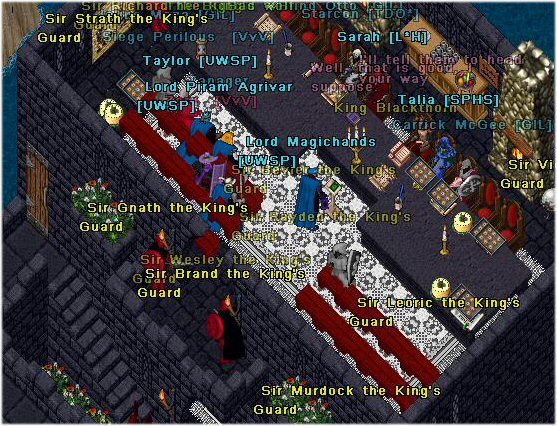 King Blackthorn: Good evening all. You may be seated *royal wave* I hope you all enjoyed the festivities today?

And I see our Royal bakers have been keeping the party going, Excellent! I have a few announcements, and then we will move on to our governor’s reports.

First, I wish to repeat my congratulations to our land’s brave defenders that was an outstanding display of heroism and valor and sound tactics.

Secondly, and not quite such a happy note. There appears to be a strange woman traveling the roads and the towns who is claiming to be my wife I assure you, she is not.

Whoever this woman is, she is nothing more than a common con artist but, warn your citizens.
She has been using this ruse to rob people blind *glances at Otto* or in some cases, blinder She will be brought to justice sooner or later preferably sooner.

Secondly, I have heard the requests for a road from the Britain moongate to the teleport hub
while nothing is certain yet, I have instructed my surveyors to begin looking into it
Once I have their full report, a decision can be made.

Now, lastly, on matters of security here. The Black Watch are reminded that they are responsible for security but asked to keep any fighting outside the chambers. If you have any questions in this regard, please speak to me later or consult the guard captain

Now, on to our governors. Is the governor of Jhelom present?

I shall not go into any detail regarding here except to say the Governor was absent, HRM was not to happy why and that Joline Maza did speak for the absent Governor. The remain Governors (except for Vesper and Yew) did give their reports as well as a Rep for UWSP Township.