Tanager: I missed!
Kenzie Mori: The bottle thrown by Lady Tanager has hit my head and liquid in the bottle has spilled out!
Tanager: oops sorry Kenzie lol 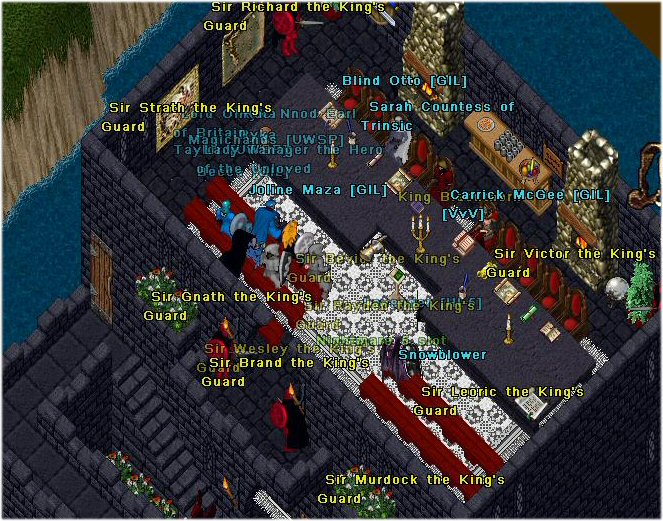 Seems that the Lady Tanager was running for office, Jhelom had been vacant for a while and she was seeking that position of Governor. So free drinks for at the meeting. I am sure HRM saw this as well, and no doubt could smell it off of Kenzie to.

Note: There had also been rumors of free cake at this meeting, not sure why such a rumor was necessary as most were there to either protect the citizens or to protest hence a large number of Orcs outside during this meeting. 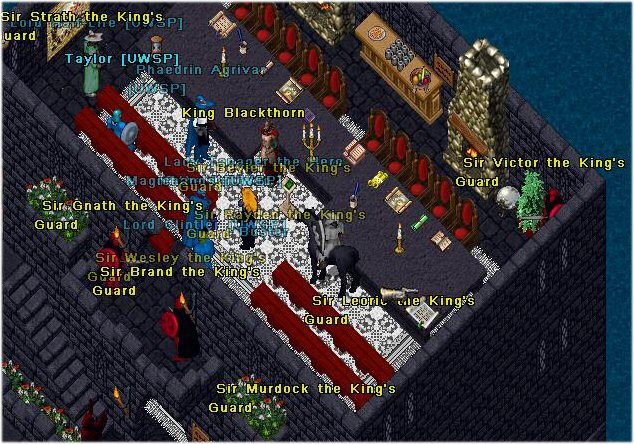 King Blackthorn: Please, be seated. Please ignore the vile rumors of cake – there never was a cake. The cake is a lie. If you want a cake, please engage with the bakers of the realm. It will keep the economy going and should be fulfilling at the same time.

But to more serious matters! You no doubt found some orcs outside? They are growing more brazen with each day and smellier, going by these report scrolls.

(I am sure it was Kenzie he was smelling here now)

I have been in talks with the Queen of the newly discovered Meer enclave. If there was ever doubt that orcs are a stupid lot, this should put paid to those doubts. The orcs believe that the Meer are our allies, and blame them for the damage to their ancient monument. The really idiotic part is, our scribes have inspected that monument. It is no monument at all. It is an ancient sign for a tavern, advertising cheap steaks and ale.

So, this entire war is over the price of ale. *sighs*

King Blackthorn: At any rate, stand ready for the call – and if you feel in need of any battle practice, I believe the gate to their realm will be open most of the time. So, beat those orcs back whenever you can they appear to come and go at random times which is probably due to them having no sense of time or, quite simply, no sense

In news of a lighter vein, I have noted that the fair damsels of our land have been somewhat neglected of late. And no, this does not pertain to that strange in-law of one of our governors!!!

*sighs deeply* I intend to rectify that. So, as my first decree in this regard, and given that Spring is now upon us, I felt it fitting to arrange an evening for the ladies to show off their best and brightest fashions.

The date will be announced soon There will be three categories. First, best overall outfit. Second, the outfit that best represents the spirit of our realm. I leave it to you to decide what that spirit is. And third, given that many of our ladies are mighty warriors, or cunning mages a Dressed To Kill category!

I hope this is pleasing news to you ladies of the realm? Now, you might ask, who will be judging this contest?

Tanager: a beauty pageant!
King Blackthorn: indeed! I would ask that those who wish to help in this endeavor send a pigeon to the Royal taskmaster. That is at the coop designated [email protected]

Kenzie Mori: I ask that Blind Otto be the Judge
Blind Otto: eh? I pick that one *points at guard*
Magichands: lol
Kenzie Mori: hehe

King Blackthorn: ahem The first 7 applicants will be designated as judges. If those seven cannot be available on the eve of the judging then those who are available will vote if there is a draw, then I will carry the deciding vote. But, I am asking for 7 – let us hope all 7 who win places can be there.

The winning outfits will be placed on display at the hall of champions. Please note, this contest is open to the LADIES of our land – but if any male mages, possessed of the spell called polymorph, wish to try their luck then – all I can say is, good luck to them! And good luck to the judges, too!

King Blackthorn: *looks at small scroll made of a wine bottle wrapping that just landed in front of him* What’s this? No. No, there will not be a naked lady category. Who put this scroll here?!? *looks at Tanager suspiciously*

Tanager: wait I have to wear clothes?

King Blackthorn: Hmm. No – it would not be right. I could not put our ladies at risk of pneumonia
Lavender: *snickers*
Tanager: very thoughtful of you, my lord
King Blackthorn: Minimalist is fine – but not too minimal

Blind Otto: *looks confused* I don’t get it… why compare clothes? They’re all black to me
Magichands: well probably someone can disagree with you, your majesty 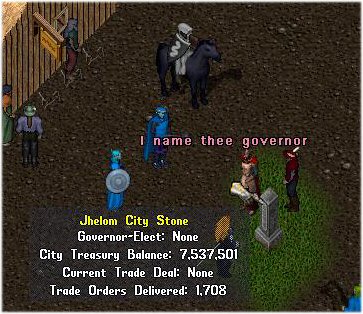 King Blackthorn: They are welcome to try to change my mind. But, I will not endanger my subjects. You are all far too important to risk exposure to the elements. Look what happened the last time we were attacked by elementals!

And I’m sure you wouldn’t want an orc to catch you in a compromising outfit. Now, to our towns and cities. Jhelom does not currently have a governor, but I believe there is a statement to be made? *looks around the room*
Tanager: *pauses in the act of drinking an ale*
King Blackthorn: Lady Tanager, did you wish to address the room?
Tanager: oh, right, yes. (She steps forward facing HRM and others) Jhelom is woefully neglected
Blind Otto: disgraceful place!
Tanager: *stares at Otto*
King Blackthorn: *signals to guard, points at Otto*
Magichands: lol
Tanager: Well the Blind man speaks truth! The library is a shambles And yes, Jhelom DOES have a library!
Blind Otto: and there’s nowhere for disabled people to park their chariots.
Tanager: And so, if it pleases the King and his Council I would like to ask for the vacant seat of the governor for what remains of the term.
King Blackthorn: *looks at Tanager over a scroll* I see. Are there any other applicants? Not to dismiss your application, milady, but I need to give a fair hearing. *looks around room*

Tanager: My contender has been… erm… dealt with in true Jhelom fashion
King Blackthorn: Excellent! Well then – are there any present who would object to the Lady Tanager becoming the governor or Jhelom?

Lavender: Nay
Blind Otto: Nay!
Tanager: There will be plenty of ale!
Blind Otto: Give her the job!
Taylor: *applauds*
Sarah: no sir
Magichands: *claps*
King Blackthorn: Very well then. At the end of this meeting, when all business is closed,
Kenzie Mori: no objection from me *holds hands up empty*

King Blackthorn: we will journey there, and I will appoint you as governor.
Ol’Rac Nnod: *applauds*
Sarah: *claps*
Starcon: yeah
Magichands: *claps claps*
Tanager: Very well, thank you all for this chance to prove Jheloms greatness!

King Blackthorn: The Royal scribe will see that you are provided with volumes I to XXIXIV of the rules and regulations
Tanager: Oh.. rules…?
Ol’Rac Nnod: *laughs*
Tanager: *drinks another ale* Oh and by the way
King Blackthorn: there will be a quiz on Tuesday. But in the meantime, we will attend to your appointment when we are all done here. Aye?
Kenzie Mori: *whisper to Tan, they make good door holders and feet rest* 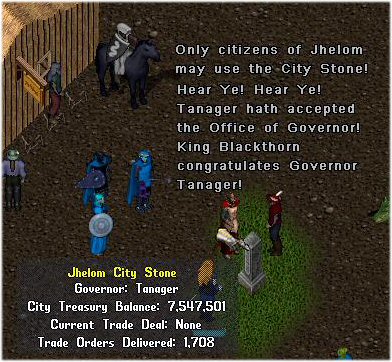 King Blackthorn: So, that is Jhelom spoken for. Now, what of New Magincia’s governor *stares at EMPTY seat* Hrm *picks up red quill, makes notes* and then… ah, nobody here from Minoc, moving on.

Blind Otto: I am here! And willing to serve! Minoc does well, your majesty! The rocks are right where I left them the hills have not moved indeed, I am proud to announce that in all the time that I have been governor, every single rock is accounted for and no hills have gone amis!

King Blackthorn: erm. Carry on then. Good work. Next?

King Blackthorn: *sighs*
Blind Otto: Once upon a time, there was a miner, who used to raise a pick or two. Remember how he dug away the supports and screamed as stalactites ran him through. Those were the mines, my friend. Into the depths, we’d send Miners, lost forever and a day.

They’d end their lives, those crews, To rocky fists they’d lose, for an elemental will always have his way. La la la la la…

Finished BO took his seat and HRM continue calling upon the governor of Britain. His report was very welcome and far shorter.

It seemed that all the other governors that WERE presented made short reports after following the Minoc Governor’s report. Maybe it was the sight of the TWO very large guards standing behind Blind Otto.

During each of the reports, HRM made to point out certain areas, or items that were for those cities. More to follow I am sure in those areas. Once all the Governors had completed giving their reports HRM we then all moved to the City stone of Jhelom where the Lady Tanager was swore in as the Governor of that city, may her reign be long and steady.