Welcome to the minutes of the Sonoma Governor’s Meeting. The meeting was a very short one as a few Governors were absent, mainly due to that monster of Real Life. There is also empty council chairs, and we are also seeking Volunteers to take up the burden of the governorship of two of our fair cities. If you need to ask which city lack a leader then you are not a citizen of that city. City Loyalty – UOGuide, the Ultima Online Encyclopedia 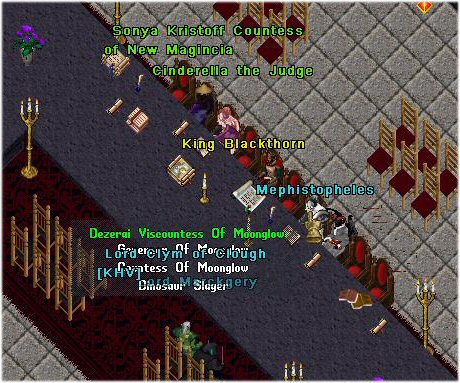 King Blackthorn: Good evening Governors! and citizens! Please have a seat. As usual, I will begin with asking how the cities are doing. Afterward, I have a couple of things to mention and will also open the floor for anyone to ask any questions or make any comments. I see we are a bit light this evening. Are Sundays not a good day for these meetings? I thought Sundays were the optimal day. Well, anyhow… Sonya, how fairs New Magincia?

Sonya Kristoff: Thank you, sire, with the help of several generous contributors the city fairs well and the construction project of the vendors’ fairs very well as well that is all that I have to report.

King Blackthorn: Ahh, very good. Very glad to hear it. I want to thank the governors for assisting with contributions Cinderella, how fairs Minoc?

Cinderella: the Miners are keeping cool in the mines the womenfolk are trying to keep cool but you know those summer nights can get a lil muggy but all is well with our city

King Blackthorn: Good to hear that Minoc is doing well. It is the summer time so I know how hot it can get Keep up the good work! Dezerai, how is Moonglow doing?

Dezerai: Sire Moonglow is doing well. Sundays have always been idea day for this meeting as many are winding down from weekend travels. I have to say that most are affected by that monster called “Real Life” and other off-world responsibility. Our guardian The Void Dragon still sleeps thus ends this report, Sir.

King Blackthorn: Completely understandable. It is after all vacation time I suppose even governors need time to unwind! Mephistopheles, how fairs Skara Brae?

Mephistopheles: All is well. Nothing new to report.

King Blackthorn: Alright, so at the start of the meeting I stated I had some things to mention.
Last month a poll was issued to see what kind of activities/contests to hold during the summer time and the top 2 with the most votes were a pet battle contest and a scavenger hunt.

He also took some time to himself and has returned so he WILL finish the soul stone house or I swear, I will have his head! now lastly Last month we had farmers being harassed for their crop yields by brigands that turned out to be orcs now I had hoped that with stopping them and their leader that this would put an end to it.

However, this has only now gotten other brigands to come out of the wood-works
and interrupt some of our trade routes. I have asked that the Captain of the Guards investigate this further and find out more.

He will call a meeting in the next several days to assist him with this I hope the citizens will be ready to put up arms and fight back against this aggression We will come up with a plan and put it into action with everyone’s help. OK, that is all I have today.

Please note, that there were a few questions and an announcement of an upcoming Player’s event in Aug. There will be an increase of bandit activity prior to the Royal Guard being summoned, so traders beware and to be watchful when doing your trade runs.

Dezerai: I do have one more thing I wish to announce to the general Public Sire

Dezerai: The People’s Army of Sonoma is inviting all to be a part of a PVP event, 10th of Aug 8pm by the Central Star in Delucia, Felucca. I have been told that PEC Raine will have a Gate at the Brit Hall in Trammel for this event. And that healers will be on station as well. 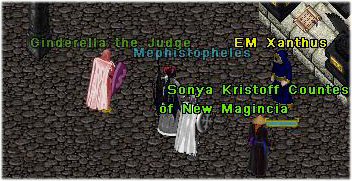 After the king concluded the meeting we all moved to the courtyard to speak with EM Xanthus who had just returned from a real-life vacation. Overall the Garden is progressing, and that he would be calling upon several of us during phases of the constructions for feedback, ideas etc.. We spoke of the idea of a Felucca event for this Bandit arch storyline whether if people would attend such an event in Felucca. Feedback on such a small percent there was a 60/40. More to follow I am sure later.

The First Meeting Of The Black Watch

A Night At The Races

The Ghost Ship Of Vesper