Hi, I was visiting: Below is Kat’s encounter. 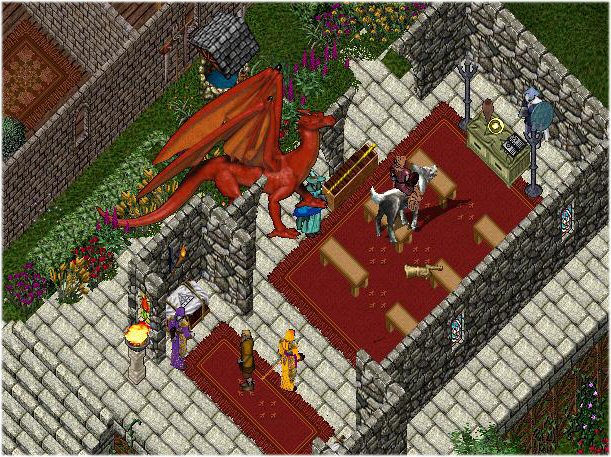 Kat Coral: Hey Butterfly I been meaning to ask what is your buff at the city stone?
Never saw the answer there as a very striking woman walked in just at that time, seems every head was on a swivel.

Elizabeth: Good evening Friends. I’m pleased to see so many here this evening.
Kat Coral: so what does T. U and W mean?
Elizabeth: they are the founding principles of the Fellowship

Kat Coral: I see
Elizabeth: I’d like to welcome you all to the Britain Fellowship Hall
Ezra Grimm: thank you
Elizabeth: We hope, with your help, to do great things for this land and it’s people
Kat Coral: By Britain’s I am assuming there will be other cities ??
Elizabeth: Oh yes, we are hoping to spread our message to all the cities and help provide aid to those who are most in need of it. Centers such as this one are the cornerstone of the Fellowship places where people can come to contribute and help spread our message
Kat Coral: donation here are for Brit only right now?
Goliath: sounds like a cult so far
Ezra Grimm: nice 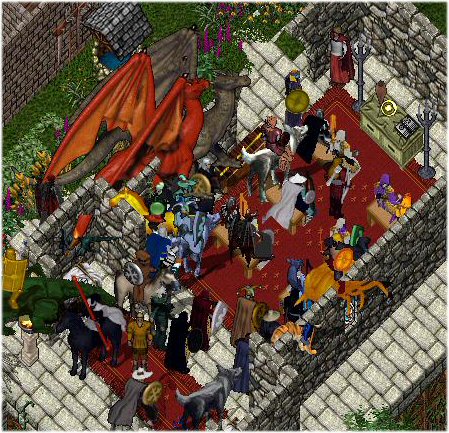 Elizabeth: The donations given in Britain will be used in Britain but also distributed to other places in need to help build more centers
Dysock: we bring stolen cargo here, does it get sent back to the city it belong

Kat Coral: good question’
Elizabeth: The cargo is distributed where it can do the most good and your contributions go to help those in need, not those who line their own pockets for gain as we move forward, you’ll be seeing more of our initiatives and I hope you will all join us in our efforts.

Elizabeth: But, before we can move forward, there is one piece of unfinished business to be dealt with. Hook is still on the loose. I have some information that I need your help following up on. Let us hope that this is the day Hook’s luck runs out.

Kat Coral: pretty sure that last time he hit the statue was a while back.

Elizabeth: as you know, two of his cohorts have been dealt with already he is running out of places to hide and out of people who will take him in. Hook has to be getting desperate which may make him even more dangerous.
Elizabeth: His supplies have to be running low and most of his men and orcs are leaving him
Ezra Grimm: good
Elizabeth: let us hope he’s also getting careless
Kat Coral: I be leaving to if you were out of grub
Elizabeth: precisely! And that brings to me to a possible clue I think we should start with. A few days ago, we spoke with the cooks in the castle kitchens regarding food for those we are trying to help. One of the cooks mentioned that food had been going missing I suggest we start at the castle in the kitchens and see if we can pick up any trail there and see if we can pick up any trail there
Kat Coral: which castle?
Ezra Grimm: the kitchen?
Elizabeth: *nods* *looks at the pets*
Elizabeth: *looks at the pets*
Ezra Grimm: no pets?
Elizabeth: the cooks are very adamant that no pets are allowed in their kitchens
Kat Coral: oh Blackthorns? dang
Elizabeth: you will want leave them at the bridge so they don’t get smacked with a rolling pin, those cooks are pretty harsh come, I’ll open a portal to the bridge for us.

I had almost decided to not go, but ordering the dragon to stay I followed all into the kitchen. I had two major concerns, one my dragon was not here and there was not a single member of the kitchen staff present, no make that three concerns there was a secret tunnel under the kitchen counter top. 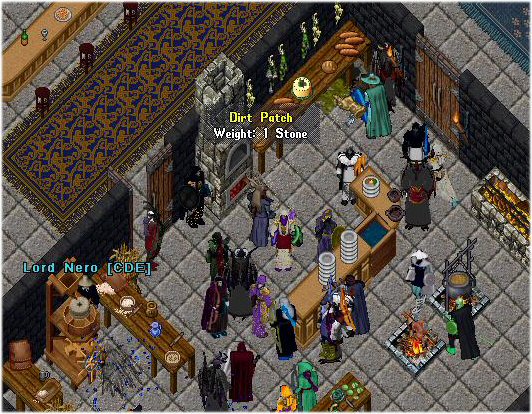 Elizabeth: hmmm, food just left out, how on earth do they know if anything is missing? Such waste
Kat Coral: there is a problem over in the north corner under the table top
Elizabeth: that seems a bit large for a mouse
Kat Coral: Very
Ezra Grimm: dirt from Hooks boots
Elizabeth: so that is where he’s coming in? But where is he coming from?
Ezra Grimm: ha ha
Kat Coral: possible. under the castle?
Keenbadger: Down in the Dungeons ?
Shamino: the hole??
Elizabeth: that would make sense, under the castle and dig his way up?
Ronan: like a gopher?
Elizabeth: he could get into this room and back out undetected? it’s Hook he IS an animal after all
Shamino: unless he is a cook and a crook
Elizabeth: gopher fits as good as any, though I’d have gone with rat for a comparison
Kat Coral: to him this is the best place who would think to look here?
Kat Coral: next question where the staff?
Ezra Grimm: *Dirt-patch in kitchen
Elizabeth: *nods* ok, let’s check the dungeon I suppose?

Like that we went to check the “The Dungeon” Now here where I took the liberty to assure my pet would be present. I was quick to catch up.

Elizabeth: keep your eyes open an stay alert! The hole in the main room seems to be where he’s coming in to the kitchen but where is he coming into the dungeon? 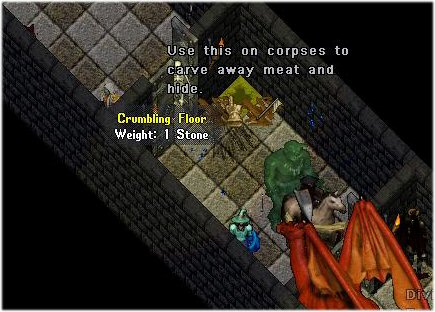 Kat Coral: there a hole in the corner
Elizabeth: this may be how he’s accessing the dungeon? *moves debris out of the way* I suppose we should check this hole

Like Alice chasing the rabbit we all went down the hole. As we emerged from the tunnel into a large cavern. To our wonders there were two large ships sitting in dry dock, a quick check of the cargo holds showed them to be empty. A map sitting on the table between the two ships was for a location of the Lost Lands. Perhaps this is how Hook was able to get those two ships here.

Kat Coral: there a map here its for the lost lands
Elizabeth: *notes the skeletons and bone piles* this definitely looks like Hooks work
Kat Coral: its a hidden cave low tide maybe?
Elizabeth: ok, let me see if I can get us to the map spot… *studies the first pin on the map*

A gate was open and on the other end of the portal we stood in the lost lands. Others far swifter then me were quick to kill off the local would be heros/bad guys?

Elizabeth: Hook’s forces are no match for the citizens here, I almost pity him

A lone prisoner stood before us, his fear was not easy to mask as he stood alone among all of us. We quickly were able to get information on the whereabout of Hook and sought a way to do so with all haste.

Elizabeth: Voldin was another of Hook’s generals. He carried out several missions for Hook. Why would Voldin and Hook part ways?
Ronald the Prisoner: After Rankin and Danag were killed, Hook trusts no one, not even Voldin.
Kat Coral: any clues where we can fine them both??

Ronald the Prisoner: *shrugs* Hook is desperate. Desperate times lead to paranoia.
Elizabeth: Still, why should we help you? You seem to have what you deserve.
Ronald the Prisoner: I have information you are interested in. I’ll trade.
Elizabeth: Ahhh, and now we get to the heart of the matter. You want to trade information for your freedom?
Tobias Cardont: We should help him even if he *doesn’t* give information —
Elizabeth: *looks to Tobias* and why would we do that? he’s obviously been working with Hook
Tobias Cardont: It’s the *right* thing to do — If he is — Then he can be brought back and *arrested* —
Tobias Cardont: If he wants to *cooperate* maybe it can help his case later — But we can’t only help if he helps *us* —
Elizabeth: *raises a brow* *scoffs* I can’t think of any information that is that valuable.

Elizabeth: of course not. *looks suspicious* And how to we know this isn’t a trap?
Ronald the Prisoner: Did you see the bones? The hanging skeletons? I don’t want to end up like that!
Elizabeth: *walks over and holds a dagger to Ronald’s throat* If this is a trap, or you are lying, you’ll beg for death before I’m done.
Ronald the Prisoner: *swallows nervously* look in my shirt pocket. I wrote the information down.
Elizabeth: *reaches into Ronald’s shirt pocket and pulls out a worn scrap of paper* I can barely make this out. Are these coordinates?
Ronald the Prisoner: Yes, they will lead you to Hook and Voldin. Now let me go! Please!
Elizabeth: Oh no, my friend, I want you where I can find you if this is a trap.

Elizabeth: We leave him here, if this is not a trap, we’ll come back for him
Tobias Cardont: We need to be *better* than the bad —
Elizabeth: Tobias, if he’s telling the truth, we will come back and take him. If he’s leading us into a trap… *looks at Ronald*
MaintAlter: good deal
Elizabeth: we know where to find him
Tobias Cardont: You can do that *without* a knife —
Elizabeth: *looks at the scrap of paper* there are two coordinates here I will try to open portals to each if Ronald is right, we should find Hook at one

She was good to her word, two portals were open and I guess I was lucky as I saw Hook where I was. No idea what the other location saw, maybe the other one known as Voldin?

Hook was like a animal, caught in a trap with no where to go. But he stood little chance of escaping, once he fell we again return to where we had left Ronald, being sure to cuff and take him in, from the look in his eyes you could tell he was very happy to leave the lost lands and to have escaped alive from Hook. Hook is dead!

The King Is Never Late You Are Just Early!