King Blackthorn: Welcome! We have a nice turn out tonight! 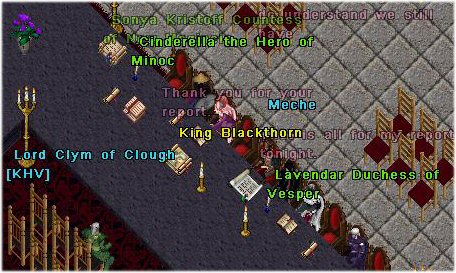 King Blackthorn: We still don’t have our beloved Brit governor. Tonight as usual we will go about our reports at first then talk about rescheduling the meeting and other happenings. Welcome Clym.
Clym of Clough: Thank you

King Blackthorn: Let us start with New Magincia. What have you to report tonight Sonya?
Dezerai: *looks over her shoulder to the shadows*
Sonya Kristoff: Good Evening Sire. I am proud to report that all is well with my fair city the treasury is well stocked and that is all. The citizens have shown remarkable generosity with our treasury.

King Blackthorn: I am happy to hear that. Does that conclude your report? Thank you for your report. I am happy that there is a better way to stock up the treasury now. I know you all have been asking for something. Cinderella, what have you to report on Minoc?

King Blackthorn: Meche what have you to report of Trinsic?
Cinderella: your welcome your majesty
Meche: The Paladins of Trinsic reported a spree of ettins and ogres around the local moongate we quickly dispatched a patrol out to take care of the issues
King Blackthorn: Very good
Meche: with full coffers it is easier to ensure full patrols

King Blackthorn: Well trained patrols are a good thing
Meche: the citizens remain on alert for any suspicious activities and report all appears clear
King Blackthorn: Keep them busy 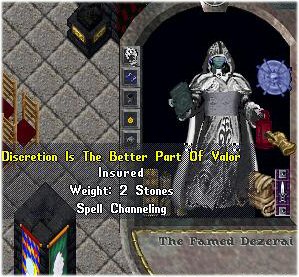 Dezerai: All is well in Moonglow Sire, the city treasury has over 800 million toward the trade which is +2 mana regen.
King Blackthorn: Very nice
Dezerai: Our Island guards have been seeking any traces of would be assassins from one tip to another
King Blackthorn: Any luck?
Dezerai: Ney sire

King Blackthorn: These assassins pose a real danger to you all
Dezerai: thus ends my report sire.
King Blackthorn: Thank you for your report. Lavendar what have you to report tonight?
Lavendar: Hail Sire. Greetings Governors. I’m very glad we have a few more on council this term! I would like to thank everyone who has been helping recover goods looted by pirates. Thanks to these kind donations Vesper is able to fund its trade deal. We are heading into summer–picnics in the woods. We hope that area will remain relatively safe. I do understand we still have pirates on the seas. Overall the town is doing well. Thank you. That is all for my report tonight.

King Blackthorn: Thank you for your report.

King Blackthorn: Now lets move on to the scheduling. The original intent for having the meetings at the end of the month was so that our Governor of Brit would be able to attend however she has not been able to in the past 3-4 months and I would much prefer the meetings take place at the start of each month. King Blackthorn: It would help better plan against any issues that may arise but I still would like to make a schedule that our brit governor can attend

Lavendar: Dezerai would prefer meetings at the start of the month and for me, that would be fine. Since we changed the date for Queen Mum, she has only made it once. So I think we should not plan meetings around her being able to attend. Thank you.

King Blackthorn: very well, would 2nd Sunday of each month be OK?
Lavendar: I truly appreciate that you gave it a try.
King Blackthorn: Or first Sunday?
Dezerai: My reasons for the beginning of the Month are we can plan ahead for the Intel receive during that meeting.

Note: In the end it was decided that the Council meetings would take place on the 2nd Sunday of the month 8pm EST, 5pm PST.

King Blackthorn: We have 1 opening for governor I believe this term. Yew does not have a governor
Sonya Kristoff: is Yew still open?
King Blackthorn: Last I checked
Dezerai: *looks to Clym*

King Blackthorn: So if anyone knows of someone interested. Please have them attend a meeting and request it. Now I open the floor to our guest

Note: We had hoped that Clym would be able to take the empty seat of Yew, but he explain that due to times zones and our new schedule that he may not be able to attend any future meetings. Still we all tried. 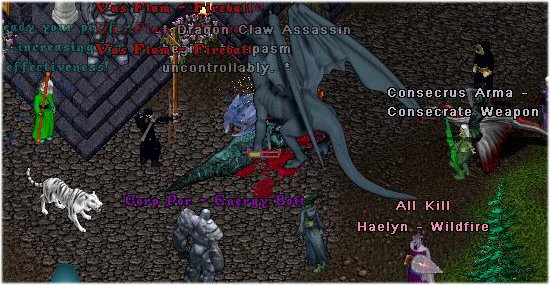 With that the meeting was called, but we were not done for the evening yet, as we cross the bridge the Assassins we had all heard about attacked, but several of the Governor’s had prepared for just an emergency and had several citizens of the land there to greet these would be assassins. None of the Governor’s presented were hurt.