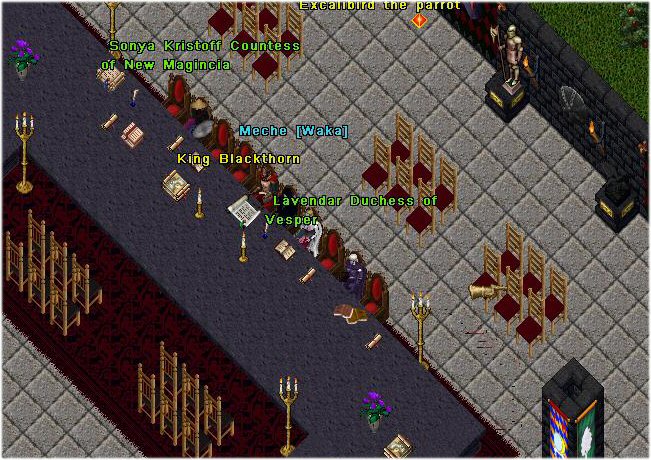 King Blackthorn: Good evening Governors! Please take your seats and let us begin Welcome to tonight’s Governors Meeting. I see we are still short a few folks but we have a good number tonight. So that pleases me! As usual let us begin with a status report on each town. Sonya how goes New Magincia?

Sonya Kristoff : Hail sire! Thank you Sire it’s nice to be here again. New Magincia fares very well Sire. The town coffers are above 450 million with more coming in every day from trade runs and returned cargo we have been vigilant about the trade lines being an island city and all and we fare very well Sire thus ends my report Sire.

Dezerai: *smiles* Mine report is a bit longer then normal. Right now the city’s treasury balance is well over 900 million. The city’s buff is a +2 MR, Merchant’s Association.

The Guardian of Moonglow, The Void Dragon stills sleeps. Chief Giggey is always on Duty to protect the Citizens of the City.

The Zoo is asking assistance to capture the Escaped Mutant Turkey roaming the halls, it has scared off all the visitors and of course all the animals. We feel that it will never be at the glory it once was.

I am glad to say that the Menace of the Moonglow graveyard has been put under control, far to many times escapes from the graves there have causes great stress on our citizens. Lets hope they do not arise for sometime.

Willebrord and Selcius the astronomers are still star gazing up at the heavens above at the Moonglow Telescope.

The Encylopedia Magicka, Portal to our sister city Papua is clear (Resdu) as well as the return to the portal (Recsu) . The Lycaeum, Moonglow’s school of Magic is doing well, Herald the Wise reports over 1000 students have graduated, sadly one of those students is missing, all that was found was the graduation robe and blood, Chief Giggey is still investigating this. He has reported that there was a Skeleton found in a large house on the northern side of the island. Blood and a large amount refuse found and the room was tossed, as if searching for something.

The apartment behind the Lycaeum had another strange visitor, possible mate of the escaped Mutant Turkey, the Zoo has been asked to capture this one as well, I ask that the zoo place them both in one of the pens at the zoo.

The true book of Truth is still well guarded under the Lycaeum.

The Lycaeum Annex, Tower of Sorcery, reports that the advance night courses are also doing very well, for those that have no clue where the Tower is, it is due north of Encylopedia Magicka. Jamitos the Ogre still guards the bridge. Students must stable their mounts with Varsuvious the sea serpent. In the Tower there is a full banking option, however there are no city guards as the
tower is outside the guard zone wards, but Mesanna’s Puppy sleeps, er guards that area very well.

Meche: Thank you sir, the Trinsic coffers are still overflowing thanks in part to the trades and merchant shipping after many months of unease due to the diminishing attacks by the murderers in the area the noble Paladin’s of Trinsic have voted to work with Chief Giggey of Moonglow to assist in guarding the town we are hoping this arrangement will keep the Paladin’s from becoming a nuisance to the good people of Trinsic
We are also hoping that by loaning out our guards it will lure the criminals back out to allow us something to do in our own town but for now we are happy to guard our fellow cities when needed that is all as of now if more news reaches me I shall report it quickly.
King Blackthorn: Much appreciated. Thank you for your report! Lavendar what have you to report?

Lavendar: Hail Your Highness and all here. I am glad to report that Vesper has also been blessed with returned cargo, stolen by pirates many in the community, including some of our governors have helped us with returned cargo packages which have greatly helped our coffers which were nearly empty.
My deep thanks to all. We are experiencing quite hot weather which happens in the summer but the Windemere woods are a great place to cool down as well as taking a boat on our waterways or even standing on one of the beautiful bridges I am very glad to hear the other governor’s reports and see our lands are well protected with Our King and Governors taking care to keep the pirates at bay. That is all I have to report this evening.

King Blackthorn: Thank you very much for your report to all of you. I do have something to report myself Recently, I had sent an expedition out to sea To study the sea life in celebration of the recent Shark week and unfortunately, the ships never returned in fact, we were only able to find 1 survivor a passenger of one of the ships and he told one shark of a tale sharks and other creatures that came on board their ships and attacked them seemed to be lead by someone named King Barnacle Who was going on about how he and his brethren are tired of how those on land treat the sea.

There is not much else we could get from the survivor as he needed further medical attention at the time but I am sure more details will come to light I will make sure to keep you all updated and the royal guard as well as more information comes to me Now, I would like to open the floor to our guest Kalin have you anything to bring to us today?

King Blackthorn: Does anyone else have anything for us tonight?
Dezerai: no sir
Sonya Kristoff: nothing here sire
King Blackthorn: Dezerai are you doing weekly events to help the zoo? Perhaps you could gather others for an hour per week to help teh zoo return to its former glory?

Dezerai: Sire we are not doing events at the Zoo as the number of people across the lands is not enough to do so
King Blackthorn: Very well Alright then, I will be concluding tonight’s meeting, but Xanthus does need to speak to you all afterwards. Please meet with him at the statue out front he will be with you shortly
Sonya Kristoff: yes sire
Meche: good nite sire

Note: Yew seat of Office is empty, feel free to petition the King if you wish to join us every month.