The Oracle and the Bard
By EM Malachi
The moongate opened, and a mage stepped through, carrying a heavy picnic basket with both hands. A few gargoyles in the settlement waved to her, and Mariah put down her basket to wave back. Mariah had taken to visiting Naxatilor every few weeks for tea. While the seer would share Ter Mur delicacies like grilled skree or salmon and thistle tart, the elder gargoyle had developed a sweet tooth for pastries from Moonglow’s bakery. Today, Mariah had also brought along spiced dates from Nujel’m for the two to share as they discussed history and arcane lore.
As she came into view of the seer’s home, she noticed two armored gargoyles standing guard in front. When she got closer, they nodded at her and moved their pikes out of the doorway. Inside the stone house, her friend was lying unconscious on a futon, his entire body trembling with fever. Zhah, queen of the gargoyles, sat beside the seer, holding his hand and looking very worried. When Mariah was noticed, Zhah turned to her. “Mariah of Moonglow. I’ve been expecting you.”

“Naxatilor collapsed in the midst of an intense vision. Something he experienced so affected him that this happened.” Zhah pulled back a sheet to reveal that the old gargoyle’s wings were badly mangled, as if they had been slashed and burned. “This has never occurred before.”

“I do not know. He is the last of his generation and the oldest of us. My best mystics have not been able to do much more than help him sleep.”

“Now, I will have him moved to the Royal City to keep him safe. Whatever did this may try again. You must deliver word of these events to your king.” Queen Zhah handed a scroll sealed with her mark to Mariah. “We all must be ready for what is coming.”

Bundor Bard unpacked a box of quills as he watched the movers put the last of the furniture into place. The rented room was small, but it would do nicely for what he had planned. He nodded to the workers as they left and continued to unpack his writing supplies. On a desk nearby, a magic quill continued to make copies of a sheet of paper.
After a time, a woman dressed in the finest silks strode into the room and sat in a chair across from him. She played with an ink bottle and stared at him.

“You look like you want to ask me something, good lady.”

Lady Machiavelli gave a laugh. “You really are serious about all this? Getting the old gang back together?”

Bundor handed her a piece of paper, a copy from the enchanted desk.
She glanced at the paper. “That colloquial misspelling always did make me want to cry. Still, I do miss the excitement. Very well, I have a scoop for you.”

The path to the lazar house was long and overgrown, and the day was hot. Despite her pale skin, the traveller wore no coverings. It had been decades since the healer had felt the Sun, and she enjoyed the warmth. The ramshackled house was marked with symbols to warn of the pestilence inside. They had laughed at her dire words in the city, but if she could help these unfortunate souls, maybe they would start to believe her.
The old woman knocked at the door, and when there was no answer, she pushed it open. When the crumbling manor had been repurposed as a sanitorium, no repairs had been made. Dirt and debris filled the halls, and there was a constant buzzing from one room in the back.
She searched the rooms, looking for those who were still alive. Despite the heat, each was huddled in a tattered blanket, to cover the disease that ravaged their bodies. The healer approached the closest figure and pulled back the blanket.
The young woman pulled herself into a shadow, her pretty face scarred by pox. Her voice was only a rasping whisper, “Get back. You don’t want to catch the sickness.”
The pale stranger held up a silver talisman, a small shimmer of mana glowing across the surface. “I am here to heal you.”
The wretched woman gave a dismissive wave of a skeletal hand. “Magic won’t help us. The greatest mages in Britain turned us away in fear.”
“Their spell circles are children’s toys. I practice a magic far older and purer.” The healer moved the spell focus across the woman’s face, melting away sores and healing the skin. The ash pale face came alive with a rosy bloom.
The healer continued around the room, curing the rest of the outcasts. When she was finished, one who had been near death asked the question on everyone’s mind, “What happens now?”
The stranger removed a small glowing obelisk from her robe. “I have healed you, but there is a price. I need you to help me save this world.”

THE SHATTERED OBELISK – PART ONE

It is just another day in Britannia, or is it? In an effort to stimulate trade and bolster city treasuries his Royal Highness has announced a reduction in tariffs, giving a large bonus to all city trade deliveries. With an increase in trade traffic, royal trade carts are finding themselves ambushed on Britannia’s roads. Who are these unknown attackers and what is their intent? Are they merely highway men looking to score some easy coin or are there more sinister forces at work…

Waking up in Britannia this morning, a strange mumbling could be heard from the Town Criers….rubbing my eyes and stumbling out of bed, I went to the window so I could hear…
~Crown announces trade deal bonus! Visit City Heralds to purchase Town Cryer today!~ 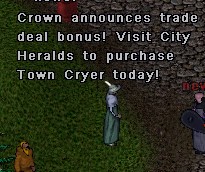 ~Well of all the…~ I muttered, throwing on some pants and heading out… 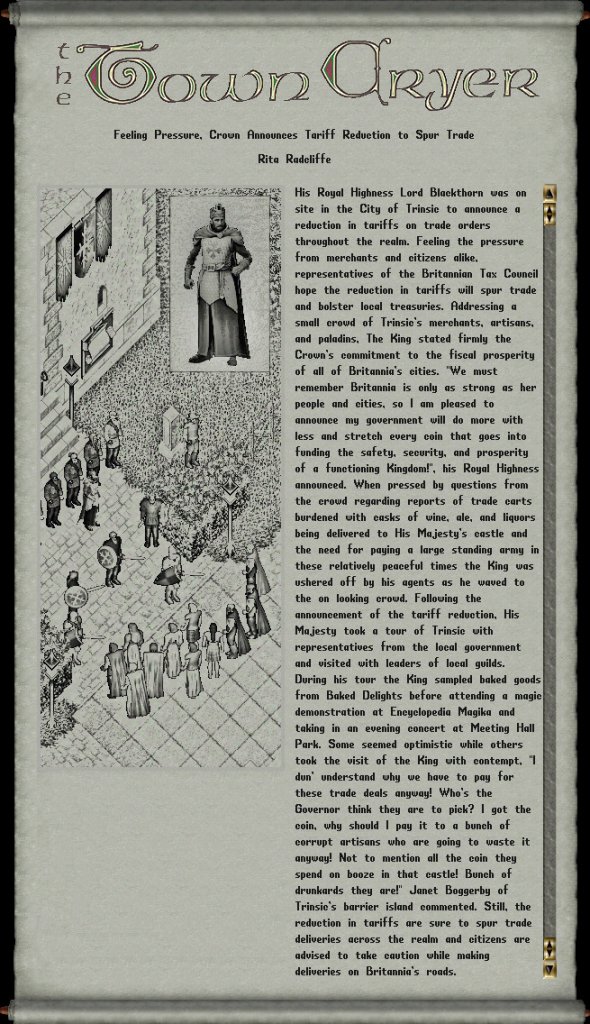 It seems as though the Kings new Decree has spurred some hatred among the traders of the realm. Trades have become less and less due to the trade routes being overcome by ambushers, leaving city coffers near empty and citzens in an uproar over the increased cost of goods.
Curious about this whole affair, I went and got my trusted dragon out of the stables and headed out….wanting to see for myself what the fuss was all about.
I headed to the docks in Trinsic…the Trade Minister was very pleased to see me..not many have offered to deliever goods these days. I took the order from him and was on my way….
…but not too long after being on the road, I got a first hand glimpse of what all the fuss was about… 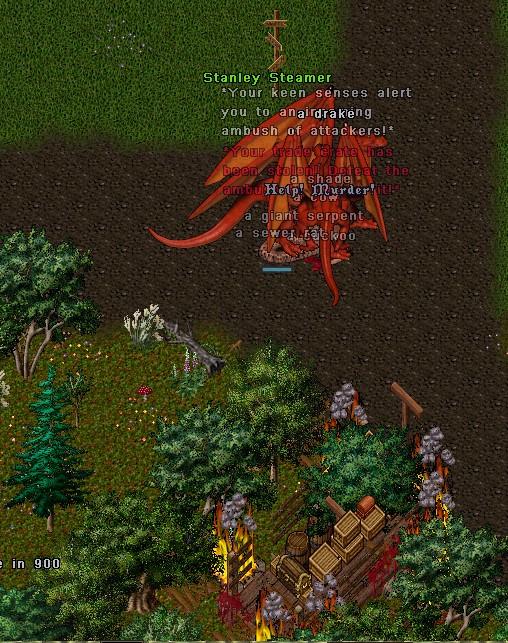 A Flaming caravan appeared and creatures stole my trade order and attacked!!!​

Well of all the….whistling to my faithful companion, I quickly dispatched the vile creatures….the caravan disappeared in a noxious cloud of black smoke and I recovered my order.​ 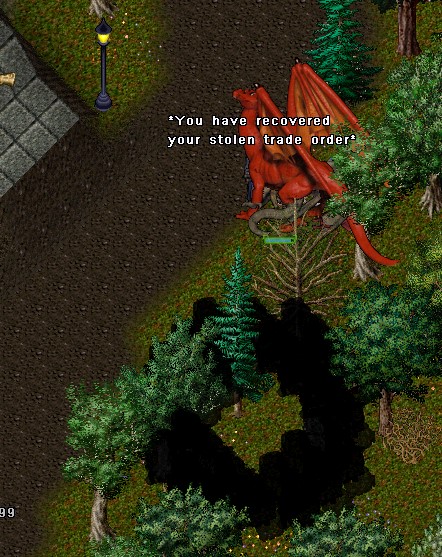 A bit shaken by what I had just been through but otherwise alright, I inspected the corpses and noticed something unusual on one of them

An item I’d never seen before…it appeared to be a bottle of some sort, but no bottle I had ever seen…it’s glass dark and smoky with a strange swirling mist inside 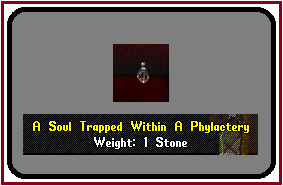 Dusting off my robes, I continued on…more wary this time….the citizens had a right to be upset…if this is what was happening to their trades….something must be done.