Once again it is that time of year. Time for Trick or Treats and things that go bump in the night.

This year you can hunt in the pumpkin fields for pumpkins, grave yards for Butchers, and trick or treat.

In the different pumpkin fields you can find special pumpkins named after the developers, Gms, and Ems. 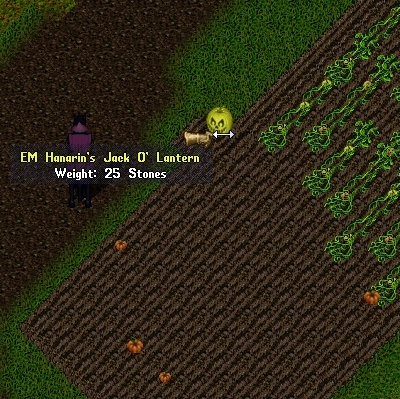 Click on the pumpkin and it will turn into a grim. While these are a little challenging, most people will be able to solo them. They are bard able

Special loot: 1 carvable pumpkins. (does not spawn every time) 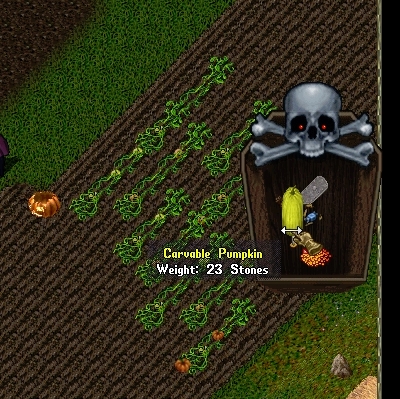 In the graveyards, including t2 City of the Dead, you can find Butchers named for a developer. They are considered daemonsc and are weakened by any type of deamon slayer. Necros, they summon a variety of the undead and lichs. This makes them challenging. 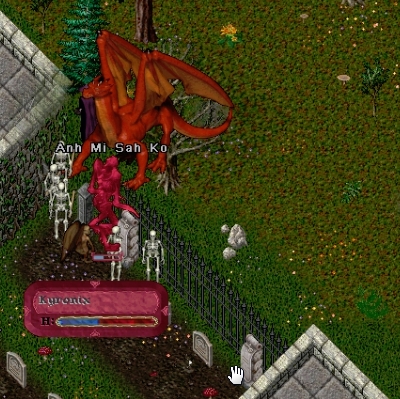 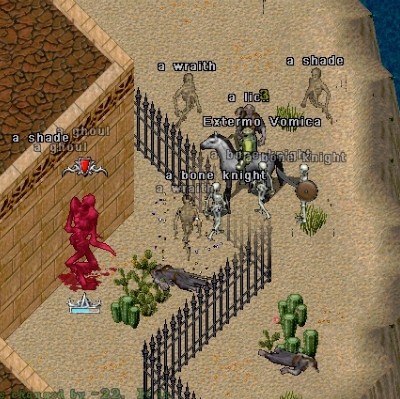 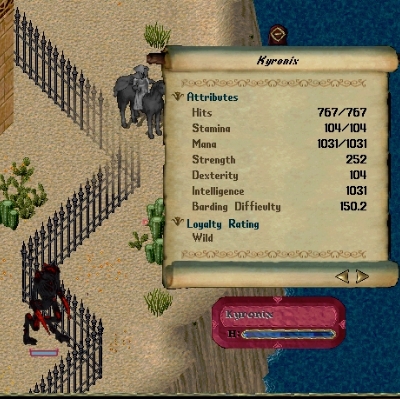 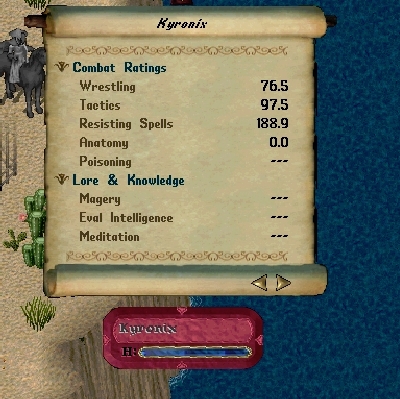 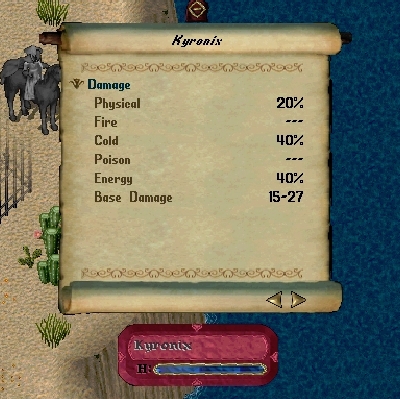 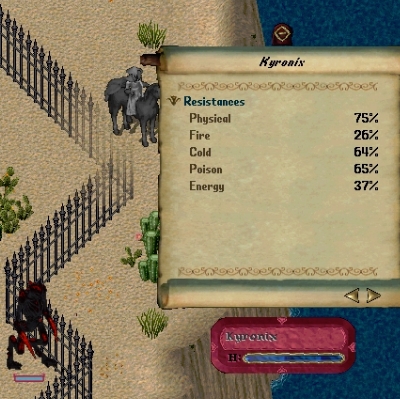 Tactics: Try to keep the fence between you and the Butcher. The Yew graveyard is one of the best to use. It has spawn of only skeletons. Plus there are healers close by. Nujel’m is another good spot. There is no spawn, But part of it is in a guard one. Keep him at the back, so he isn’t killed by the guards. Butchers are bardable at 120, with fails. 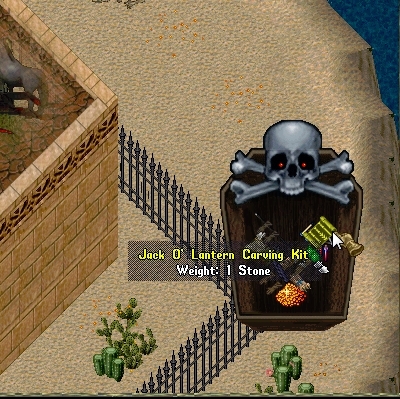 To use a carving kit, click on it, then target the carvable pumpkin. 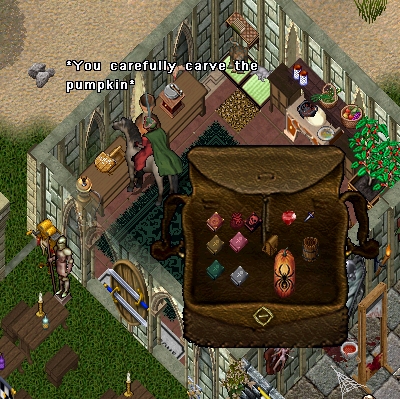 You will get a variety of carved pumpkins. These pumpkins keep the name of the person who carved it and light up. There are 9 different designs: witch, demon face, uo cross, uo symbol, Skeleton face
spider, bat with moon, fire elemental, and one that is thought to be Mondain. 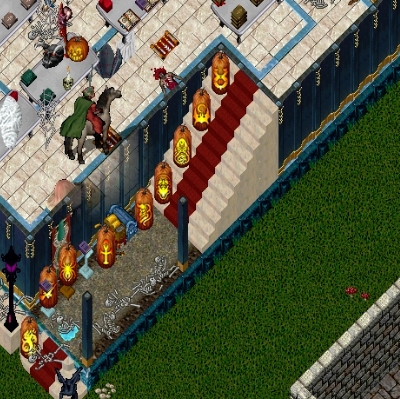 To Trick or Treat, go to an npc, say trick or treat, and targeted them. They will say different things as they give you candy. Here are a few: “Oooo aren’t you cute,” “All right….but it better not spoil your dinner”, “Here you go, enjoy”.
You do not have to wear a costume. 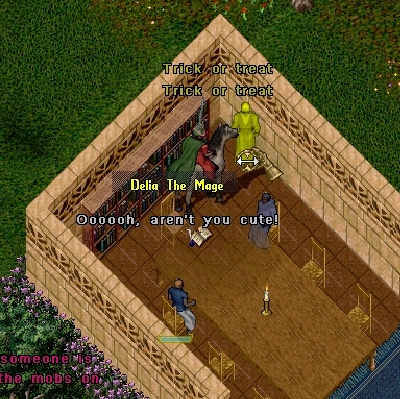 Npcs also play tricks…summoning an evil twin, that will either steal your candy or teleport you to a moongate…Makes blood puddles on the floor that slow you down. They also will color you.

You have a variety of items that you can receive. Candy is normal reward and is given the most. This is can be eaten. But after you do, you hear strange messages such as, “Make it stop.”

The npcs give a special message when you receive a special treat, “Want something really special, of course you do.” 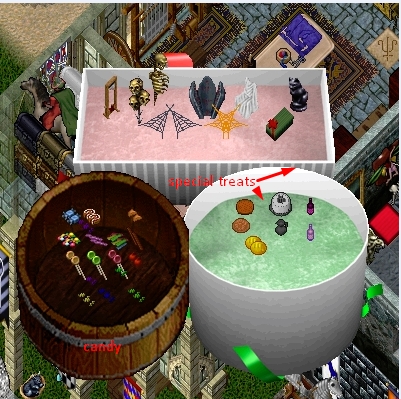 Less often you will receive a special skull. There are three different ones…the crystal, jade and obsidian. 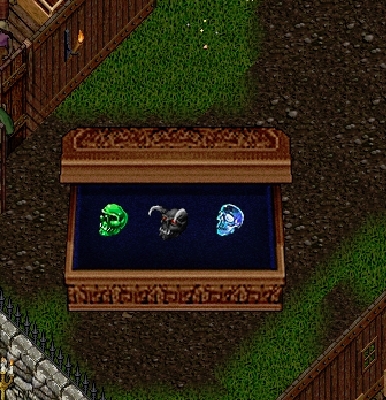 You can also recieve a Developer’s head on a pike. There are eleven: Bleak, Brutrin, Gryphon, Kyronix, Mesanna, Misk, Onifrk, Rabkban, Mrs Troublemaker, Stethun, and ThatBlok. Mesanna’s head seems to be the hardest to get. When you double click on the head, a close up picture will open. 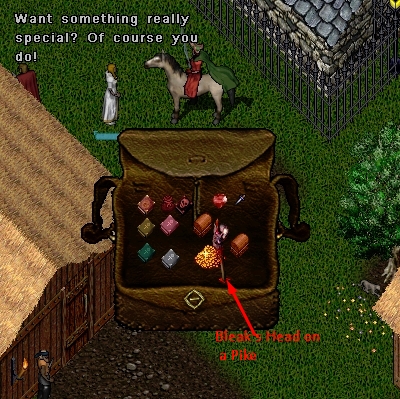 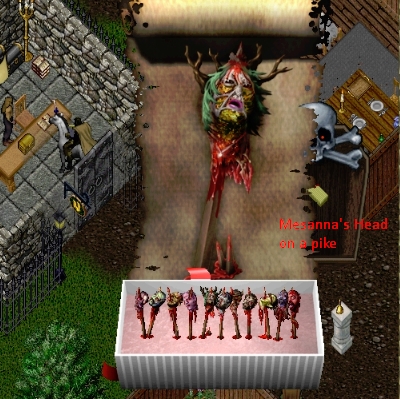