Part Two of The Shattered Obelisk had us hunting monsters in Destard, Hythloth and Deceit to look for special treasure chests containing mysterious items. 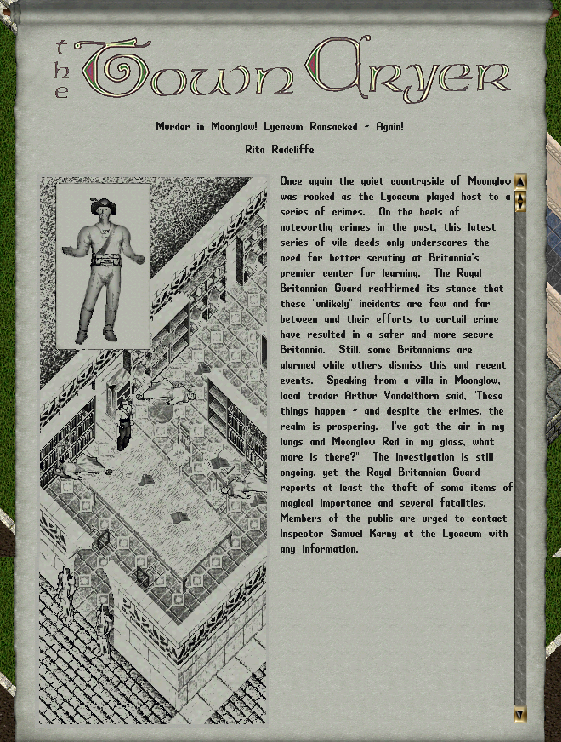 Feeling as though this is all some sort of propaganda, you decide to speak to some citizens at The Marsh Hall in Vesper, ones that have been already questioned by the Royal Guard. Lets head off to The Marsh Hall which is located on the Southern end of town. 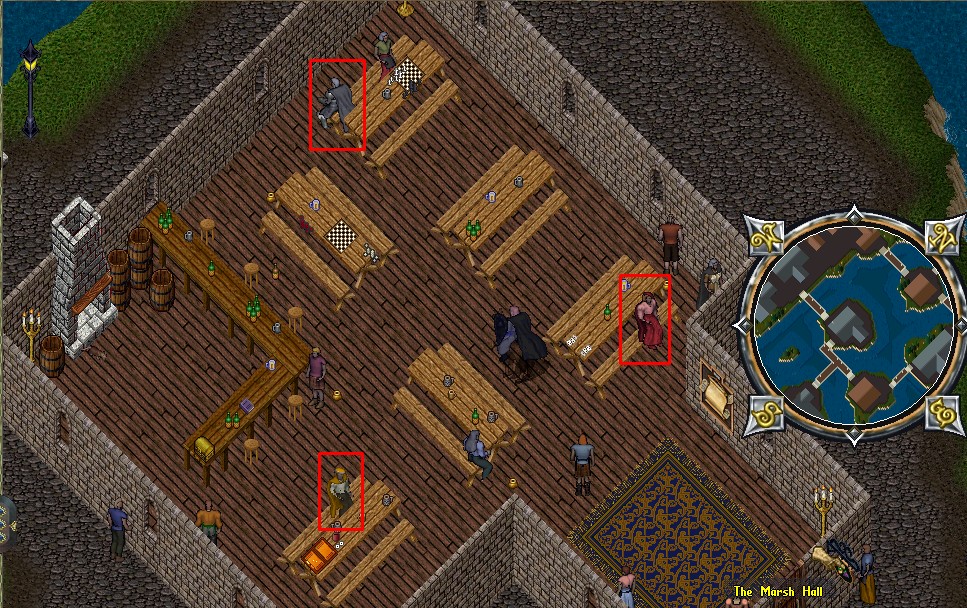 The three citizens you need to speak with are all wearing cloaks so are easy to spot. Let’s talk to the Baroness first.
​ 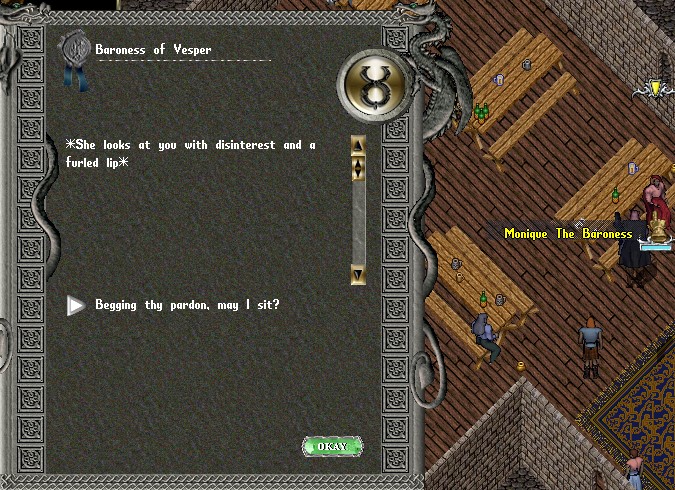 As you speak to her, she seems to feel the same as you, but you’d like to get more opinions. Lets talk to the Guard next.
​ 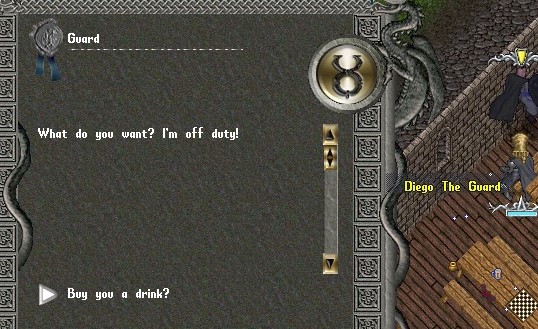 ​
The guard doesn’t offer much insight…and won’t speak of the ongoing investigation, but you get the feeling that he doesn’t put much stock in the news either.

There’s one more citizen to talk to, lets head on over to the merchant.
​ 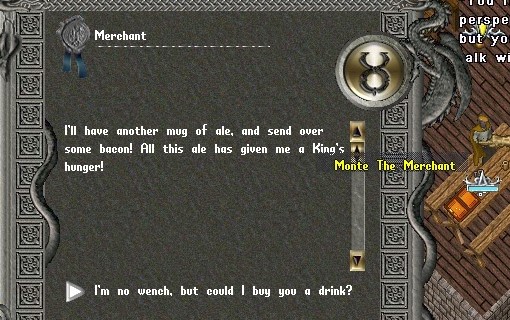 Seems all the citizens that were questioned feel about the same…all of the sudden you hear a tiny, squeaky voice.
​

​
*Squeak squeak* Thank you for taking the time to speak to me! *Mousey grin* What if I told you the recent events you’ve read about in the Town Cryer were the beginning of a terrible evil? I know…I know…you’ve heard it before and I’m sure you’ll want to know what’s in it for you. I can only tell you what I’ve seen and heard. and heroes like you will need to stand and defend Britannia against the coming evil. There are powerful forces at work in the ethereal void! I may be just a mouse but you don’t have to take my word for it! Take this spell scroll and use it to travel to the Ethereal Void. There you will meet a mage called Mythran. Please give him this note. Learn from him all you can, and together we may stand a chance!

I guess we take the mouses word for it!

Clicking on the scroll opens up an image…
​ 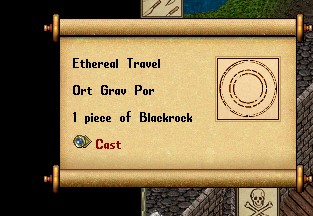 ​
as you can see, black rock is required to cast this spell, a small piece that you get from mining.

With the blackrock in your pack, use the scroll to travel to the Ethereal Void and Mythran’s Home. 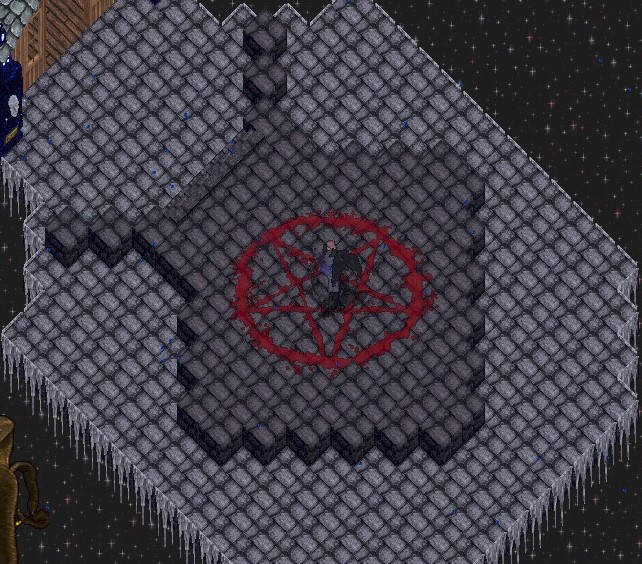 Head west through the hall to find Mythran the Mage and give him Sherry’s note.​

*Given you haven’t jumped into the void I’ll assume your intentions are genuine, what’s this? ~You hand him the note~ Sherry is persistent isn’t she. She is right you know, even though I doubt Britannians will listen. The ambushes you’ve read about, the strange objects recovered from the maps? And now the incident at your Lycaeum? The are all related you know, and I’m afraid the situation is not good. If you’d like to read more ofmy research feel free to explore my home, the jist of it, however, is your world and my..former..world are on a collision course with an ancient and powerful evil.

I know, I know, it’s something you’ve heard before – but you must understand. This is different. My colleague Heigel was researching at the Lycaeum. I haven’t been able to reach him since the article in the Town Cryer about the break-in there. Would you check on him, it would mean the world to me.

You notice books laying about and a small dresser with even more books in it, but when you flip through them you find they are in a language you do not understand.

Head on back to the Lycaeum to check on Mythran’s colleague….
​ 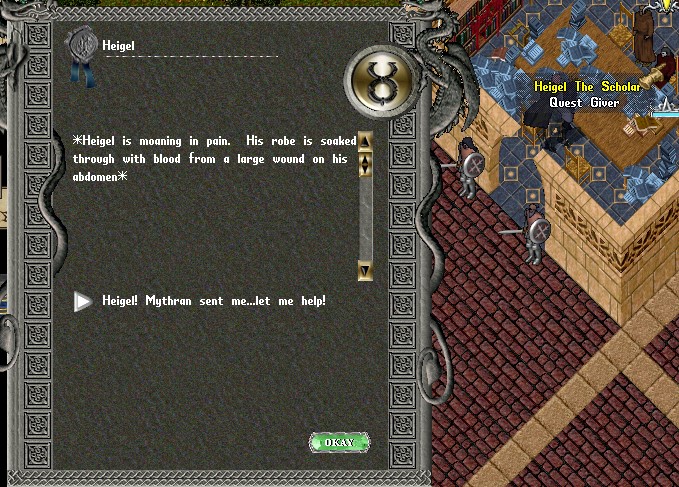 ​
It seems as though these events are more serious then first expected.

Heigel seems to have passed on, so you take a closer look at his body to see if he had anything for Mythran….as you lean in, he coughs slightly

*Cough…Cough* Heigel looks into your eyes and before shuffling off into the eternal void, he slips you a rolled piece of parchment. Looking into your eyes his dyeing words are, “Go to Mythran…Become the Warrior of Ether”

Back to Mythran we go! Grab yourself another piece of blackrock and head back to Mythran’s Home to bring him the parchment Heigel gave you.​ 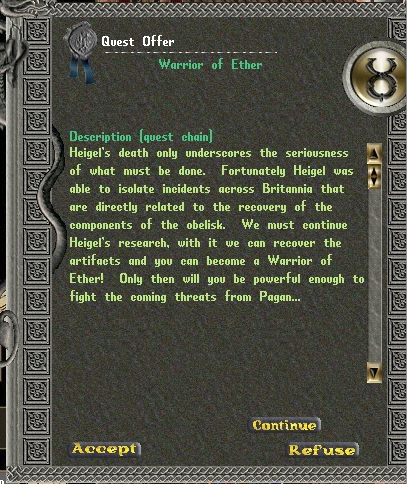 ​
Mythran then asks you to bring him 4 items:
Heart of Earth, Tongue of Flames, Breath of Air and Tear of Seas.

He also gives you a Pagen Spellbook…those scrolls you got from the treasure maps in part 2? Yep that’s where they go.

And now you can read the books scattered about Mythrans Home, they offer clues as to how to gather the items he has tasked you to get. I will put most of those in a seperate article, but there are four that you need to read to be able to decern where to get the four items Mythran asked for.​

RESEARCH NOTES (located in the hallway as red books facing down) In this volume, there are several key clues to help you figure out what to do…specifically the parts about Pagen Necromancy drawing it’s power from Lithos the great titan of Earth…and the seismic rumblings in Skara being responsible for the undead there. KEY WORDS ~ GIVING THEM PEACE is the only way I have found…..

Remember back in Part 2 you got spell scroll called Grant Peace? You guessed it..that spell is what you’ll need here.​

If you’ve already put your spells in the Pagan Spellbook, go ahead and take a look at the spell Grant Peace.​ 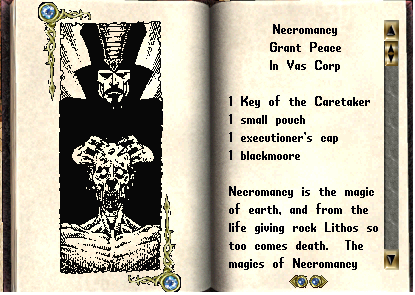 The entire spell description is as follows:
​
~Necromancy is the magic of earth, and from the life giving rock Lithos so too comes death. The magics of Necromancy harness that power to cast spells that manipulate the undead and the ground from whence they came. Grant Peace allows the necromancer to give peace to an undead creature, destroying them should the caster so desire. The casting of necromatic spells requires the Key of the Caretaker, a wand given to initiate Necromants. The necromancer is able to use the wand on a small pouch with the necessary reagents inside to achieve the desired result.~

Now if you remember from the notes, it said something about the Skara coastline..so lets head to Skara to see what’s up.​

You notice a great rift north of the Animal Trainer and it seems to be pointing to the small island just off the coast…lets hop in our boat and check it out!​ Killing the undead there will net you one Key of the Caretaker, which you need to cast Grant Peace.​ Buy a pouch from a provisioner, put the 2 reagents inside ( blackmoor and executioner cap), go back to the island, double-click the Key and target the pouch. You will see a flash of light and a pop-up on your screen..SUCCESS! You now have the Heart of Earth!​ 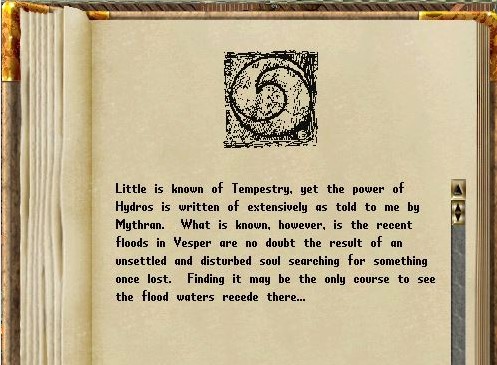 Here we get a glimmer of flood waters in Vesper and a lost soul in search of something….lets head to Vesper!​

Here we find the Necromancer Kalen, there is a story about him and his lost love in the books at Mythran’s House. I will post those in another section. For now, Kalen wants us to find a memento of his love that was washed out to sea.​ ​
Upon talking to him again, it reads ~Recover a memento of Kalen’s apprentice lost to the seas, likely entangled in the remains of a ship marked by an SOS…~

Any old SOS will do…you’re going to need a bit of luck to find this item quickly. Either hop on your fisherman to take the quest (IMPORTANT – Your fisher MUST be on the Warrior of Ether Quest in order to accept Kalen’s Quest) or, some have said that if you are on the quest ~ The Zealotry of Zipactrictl~ it will help you find it quicker with no fishing skill.

So head on out to see with some SOS’s and hope you find it quickly. You’ll know when you find it because your screen will flash for a moment and a message will pop up on your screen.​

Mark the staff as a quest item and return it to Kalen, he will give you the Tear of Seas as a reward.​

Once again we return to Mythran’s notes to learn more about this.​ Reading through it, you see mention of Fire, Pyros the towering fire deamon, recent fires in Britian and the proximity of Britian to a source of great fire. Also some clues as to how to cast the spell, Summon Perihelion. ~Sorcery requires extremely precise placement of reagents and candles around a pentagram, before the focus is conjured in the center~ From the clues given here, and a bit of luck! You will have a pentagram (Crafted, can be placed anywhere in a house) and the candles and reagents obtained from Part 2, set up to look like this:​ Now from the research notes we’ve read, we know that it’s a deamon, and it’s fire….where would you find deamons and fire? that’s right..The Deamon Temple on Fire Island..let’s go!​ ​
Go up to the top on the bloody pentagram and double-click your focus…and WATCH OUT! The Deamon will spawn and you have to kill it.

He’s 100% fire resist so don’t use fire against him! I took my Frost Dragon and he did pretty well, Sampires work too with cold weapons.

Once he’s dead, you will get the Tongue of Flames…one more to go!​

Once more reading the research notes, we come across this:​ I guess we head to Minoc and see what’s going on!​ You notice odd creatures wandering around the mines, and you see a pile of rocks and the trapped miners….let’s kill some of these things and see what we find.​

​
Now in the notes, it reads ~I guess without some sort of INTERVENTION I fear the miners may be trapped….~

So yeah back to those spell scrolls you got out of the chests in Part 2..​ ​
Reading through the spell description, it states that Theurgy Foci can be crafted by tinkers learned in magic…with enough quicksilver a focus of Theurgy can be crafted.

Yep, you guessed it..hop on a tinker or have a friend do it for you. You need GM Tinkering and GM Magery and 20 Quicksilver. THIS IS VERY IMPORTANT! Make sure you have a high % Tinkering Talisman, preferably one with Loss Prevention on it because without it you only have a 5% chance of success and you’ll lose a LOT of Quicksilver.

So kill the Quicksilver Elementals until you find at least 20 and craft your focus. It looks like a white prospector’s tool. Go back to the mines and stand by the rocks blocking the entrance. DO NOT have the focus equipped, just in your bag, and say the words of power.​

In Sanct An Jux
​

​
You’ll blast through the wall and into the mine to rescue the trapped miners and receive the Breath of Air!

~You have truly learned the way of Pagan magics and the origins of Britannian magery. With this knowledge you have become a Warrior of Ether! You feel equipped to handle the coming threats to the realm!~​

He will then give you the final pieces…the base to the Obelisk and the very tip. Go back to your house and re-build the Obelisk!​

First place the four pieces down and then raise them with an interior design tool, then drop the base underneath. Double-clicking the green gem will infuse your weapon or spellbook with the Pagen Titan Slayer property. This can only be done once per day and lasts 24 hours.​ ​
You are now ready to fight the coming evil and slay the evil Titans!

(Thank you to Tina Small, Poo, Kylie Kinslayer and others I have forgotten but will find them lol for the use of images for this walkthrough. Good Luck!)​