Infiltration of the Fellowship​

As you know from our previous meeting the Royal Spies infiltrated the group know as the Fellowship. During the mission we met the leader of the Fellowship, Lord Batlin, he seem to be very impressed with all of us and invited us back for another mission the next week. 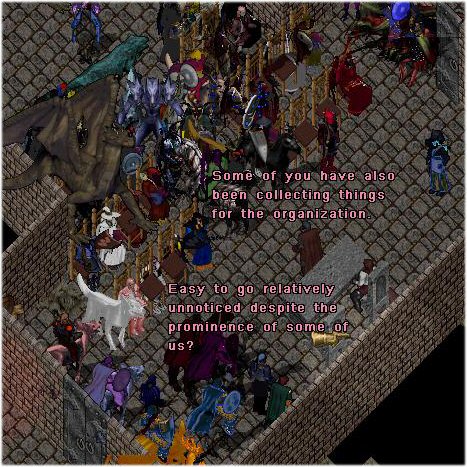 Magnus Grey: Hello all. Tonight, you will be maintaining your cover and doing work with the Fellowship. Last week, you infiltrated the group and caught the eye of Batlin himself. You will need to build your reputation with the group and hopefully earn their leadership’s trust. If you were not able to join last week, find someone who was present to vouch for you. The Fellowship is doing a lot of work to recruit and grow its membership. Some of you have also been collecting things for the organization.

John: Easy to go relatively unnoticed despite the prominence of some of us?
Magnus Grey: The Fellowship is trying to recruit important people.
John: *nods*
Vixen: like Governors

Magnus Grey: Batlin regularly sends gifts to lords in positions of importance. Small tokens of his esteem. None that have yet crossed into bribes.. Not that I watch people’s mail. Any questions before I gate you to the Fellowship Hall in Britain?

Very few questions, most with regards to having someone vouch for them so they could enlist in the fellowship.

Ang: are we going to die? *Please note Ang did die

With those last words, Magnus opened a gate to the city of Britain.

Feridwyn: The new people I was told about… Lord Batlin mentioned you would be coming. He specifically made me wait on this shipment. Have any of you been to Ter Mur?

Of course most have been there. 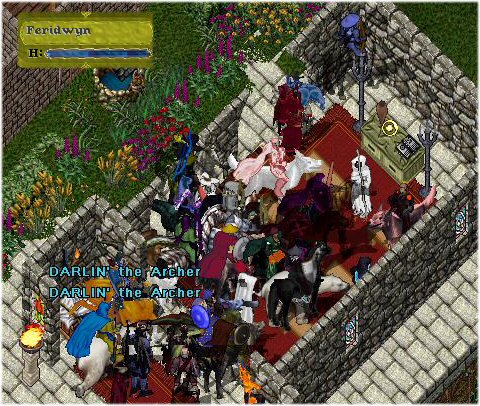 Feridwyn: Good good. Lord Batlin has never been himself. But he views our gargish brothers and sisters as worthy. So often have they earned our trust.

Martyna Z’muir: Lucky them?
Feridwyn: And their own beliefs are almost a parallel of Lord Batlin’s.

John: Unity; Order.
Feridwyn: Worthiness. Diligence.
Martyna Z’muir: That is an.. oversimplification…
Feridwyn: True, there are some differences, but all things move toward right in the end. *smiles* So you will be working with our first gargoyle member, Brother Quan. He will run the first Fellowship House in Ter Mur.

Feridwyn: We have already found a good location and started construction. You will help Quan with our goodwill mission. We need to bring supplies to Ter Mur’s refugees. Your first task will be to purchase the food we need in Britain.

Note: *First red flag up*. We are to purchase food?? What of the millions of cargo turned in, a question raised by many there that have turn in cargo here? 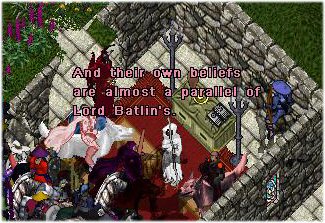 Biscuit Kreuger: which kind of food is required?
Tanda: Do we have a grocery list
Malice: what donations are you asking for besides crates

Feridwyn: Food. Lots of food for the gargoyle of Ter Mur. don’t have a list.
Martyna Z’muir: Why would we need to buy the food when the Fellowship has received hundreds of millions in donations?
Feridwyn: One shows their worthiness in what they can sacrifice to the common good.
Vixen: do Gargoyles eat fruit and veggies?
Feridwyn: I believe those donations were allocated already…

Martyna Z’muir: Really? Where?
Feridwyn: I think..
Martyna Z’muir: Hundreds of millions…
Feridwyn: I am only responsible for the poor of Britain and Paws.
Martyna Z’muir: Already spent?
Vixen: Paws?
Feridwyn: There is are the Fellowship Houses and there are hungry people all over…
Slick: where do we bring the food
Vixen: what is paws?
Ronan: let’s teach them to farm in stead!
Feridwyn: Paws is the poor area outside of Britain.
Martyna Z’muir: *sighs*
Feridwyn: Ter Mur has issues with farming due to their decline. I can see that some of you have questions. I will get you answers. Trust your brother.

Martyna Z’muir: *sighs again*
A Gargoyle named Quan had arrived, and was laying out empty crates across the floor.
Feridwyn: Now while Quan finishes, go gather food for this mission.
Martyna Z’muir: *mumbles about obvious corruption*

*Where a 7/11 when you need one. I quickly ran over to the nearby tavern and purchased 50 wheels of cheese from the cook*.

Feridwyn: I will go check on Brother Quan.
Quan: Brothers and Sisters, Welcome! IF you can load these crates and then help me carry them.. Load up the crates and we can get started! Carry what you can brothers and sisters! Please go through the gate!

I made sure to grab one of the crates dropping my cheese in it and then calling my pet jumped into the Gate.

Quan: Good work! Now we can find people to help…
On the other side of the gate we found ourself in Ter Mur, standing before the now recognizable white marble house of the fellowship in construction. 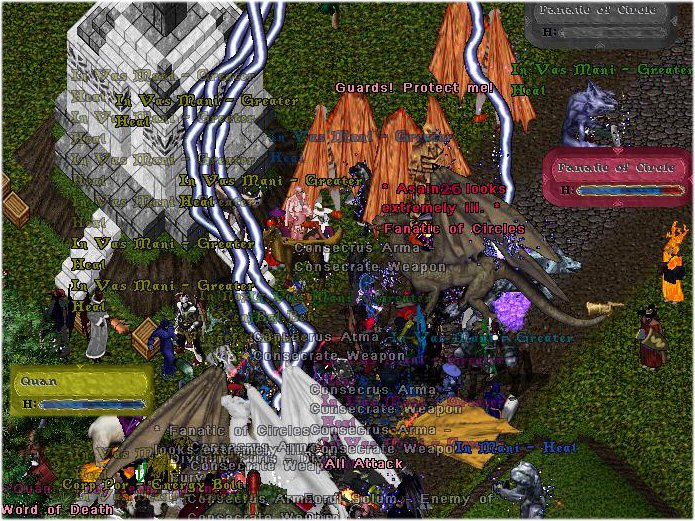 You see: Fanatic of Circles
Suddenly all came under attack by what we later found to be Fanatic of Circles.
Quan: *looks nervous* I have no wish to fight…
Ronan: they’re after food?
John: “Not sure.”
Quan: I don’t think so.. They seem violent…

Quan: What was that?
John: We thought you would know.
Vixen: I was about to ask you that very question what was that?
You see: Teregus
Teregus: You must stop what you’re doing here!
Quan: Why?
Teregus: Ter Mur has no room for strange foreign beliefs. While my job is to maintain the practices of Singularity, there are some who hold the Principles even more deeply. This sometimes leads to violence. I must ask you to close this building.

Quan: But we brought food! We want to help!
Teregus: We have learned in the past that we must maintain Order and unity.
Quan: We value those things too. Trust your brother!
Teregus: I sense your Passion, but I cannot condone your actions. If you wish, you may speak to the Queen.

Vixen: then lets us do so
Teregus: *flies away*
Quan: I cannot speak to a Queen. I am only Quan. Will you go, brothers and sisters?
Ang: yeah
Quan: Plead our case. We want to help.
John: Perhaps the leader himself.
Quan: The Fellowship helped me be better. I was bad before…violent and selfish.
John: Perhaps the leader should speak to the Queen. Leader to leader.
Quan: We can help people here.

John: We are but new.
Quan: Lord Batlin is away. I don’t want to go back to Britain having failed.
Vixen: I agree with all the rest get our leader here we only been in the fellowship a week and we lack what is needed here.

Quan: Can you at least go and make appointment for Batlin?
Tanda: That seems reasonable
Quan: Thank you!

maints magic: “sighs”
Vixen: *sigh*
Martyna Z’muir: There is nothing wrong with giving food to the refugees..as long as there are no strings attached. 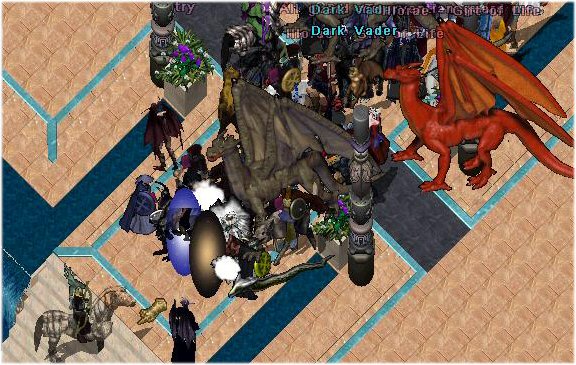 Princess Rhista: The Fellowship? Why are you making this appointment?
Kromwell Farland: we want to help
Tanda: Their gargoyle representative did not feel worthy to speak to you
Princess Rhista: King Blackthorn has sent me a letter about matters in Britain.
Martyna Z’muir: *quirks a brow*
Tanda: We can hope he has filled you in on what we may or may not be able to discuss
Princess Rhista: My mother is very busy, but I am curious about Batlin. I will grant an appointment with him.
Vixen: when?

Ang: that’s the bad Isle isn’t it
John: And I believe it is Ang, but we will perform our task. “I know you to be a capable swords woman.”

Ang: thank you for the vote of confidence
Princess Rhista: I look forward to speaking with this Batlin I keep hearing about.
Ang: can you res?
John: I can try.
Princess Rhista: I will send you to the Isle now.
Kromwell Farland: Ang first 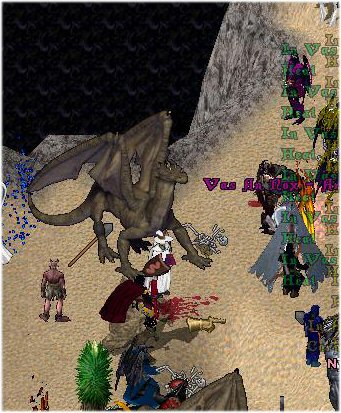 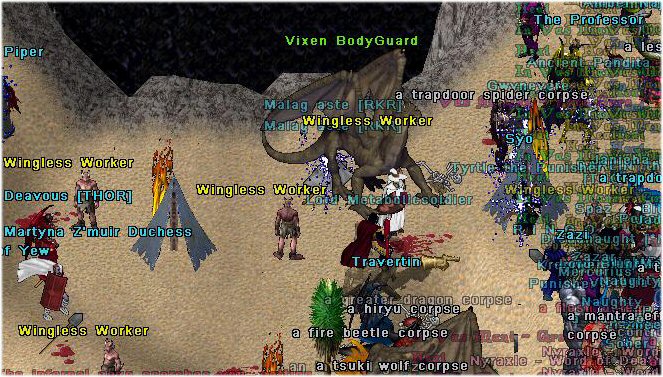 A gate was open and once more we march into a briar patch.

Quan: I came to help my brothers and sisters! My brother wingless, get to safety! We are the Fellowship! We will protect you!

Ronan: thought you didn’t fight?
Quan: My brother wingless…work together and defend your camp! Come my brothers! Flee! We must flee! *A gate appeared*

Quan: My brother wingless, we are the Fellowship! We wish to walk with you and work beside you! Lord Batlin, our leader will speak with your Princess. Hopefully, we can find a way to stay and show our worthiness. My fellow Fellowship members! You were so worthy tonight! I am glad I trusted you. I will return you to Britain for an earned rest. 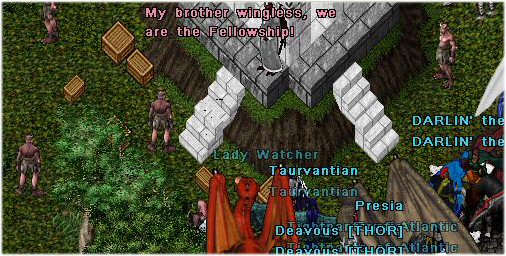 And with that we all returned to Britain, moving as one we enter the Rogue HQ and gave our reports

Tanda: The Princess Rhista has agreed to meet with Baitlin
Spoonman: we may have gained some favor with the fellowship
Magnus Grey: Lord Batlin didn’t ask? Lord Batlin and the Princess? : *looks worried*
John: Batlin’s man in Ter Mur is a gargoyle named Quan.
Magnus Grey: I will speak with the King on that.
Spoonman: but we may have given them a path into ter mur
Tanda: She said she got an update from our King in a letter
Magnus Grey: A gargoyle Fellowship member?
Vixen: yes
Magnus Grey: What are your thoughts on him?
Tanda: Quan
Vixen: brainwashed
maints magic: *nods*
Magnus Grey: A Fellowship House in Ter Mur so quickly?
Tanda: there is no independent functioning thought
Magnus Grey: They must be burning through resources.
Vixen: all from turns in
Tanda: and the Fanatics I think of Singularity didn’t appreciate our presence
Martyna Z’muir: They’ve been gifted hundreds of millions in golds.
Magnus Grey: *listens and takes notes*
Tanda: Now I like Teregus
Vixen: he is not brainwashed
Tanda: he’s trying to defend his culture
maints magic: derigh

Vixen: true
Magnus Grey: *nods* Do we think the Fellowship’s presence in Ter Mur is going to cause more problems?
Vixen: maybe have the King send another Letter to the princess warning her of the fellowship leader??

Martyna Z’muir: Probably. That is a good idea, Vixen. I will request that he do that.
John: Umm. Yes. It is the Fellowship.
Magnus Grey: I may then send you to Ter Mur in the near future.
Vixen: *nods*
Tanda: They do not deserve this plague
Magnus Grey: We have to protect our allies in these times.
Vixen: indeed
Magnus Grey: Very good work.
Chikikiataka: *chitters and screetches uncertainly*
Magnus Grey: If there is nothing else, I release you

Defeat Of The Emerald Dragon