Quite a few advances since the last time I wrote. New quests, new land masses and even rumors of player housing! That’s enough to wrap my hooves in a knot! But I am getting ahead of myself.

I was personally excited to find out that at some point while I was away for school, player trading was added in. I am not one to complain, but dealing in salt as a commodity is hard for a cow. Damned near impossible, to be honest. My dreams of hosting Serbule’s first player run flea market may now be attainable. Woot! Just moo at me now. Who needs opposable thumbs anyways?

Now let’s talk about Kur. I have a tough hide, but this was not enough to beat that severe cold. A level 50 cow with a level 50 support skill should be able to face anything, right? 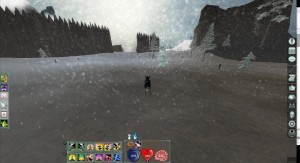 Welcome to Gorgon, my friends. Where max level skills are not enough. What may have looked like button smashing combat last month is suddenly not near enough to survive. Orcs? Oh yes Orcs, what fun. Enter sarcasm. I couldn’t even get TO to the orcs through the moo storm! What? I said blinding, turn up the hearing aid man. And not just blinding. The biting cold takes damage. Constantly. 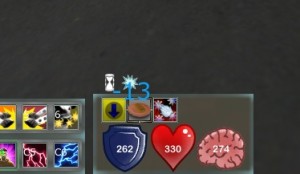 Fortunately cows like puzzles. I started shadowing residents, eavesdropping. I cooked every recipe could get my hands on. I upped my gardening game. Mushrooms had no greater enemy. Armor was the hardest, as the vendors in Ett have a real taste for beef. And the craft of blacksmithing is still a mystery. But finally I managed to get a some nice pieces and could venture into the cold again. After getting lost a few times, I found a teleportation pad. Thank the gods. I still can’t take on more than orc at a time, so the fort is lost to me, for now. Or perhaps it is meant to be group project, I don’t know. Or I haven’t discovered all there is to discover about fighting in the cold. We shall see. There is a dungeon with wolves in it and a guy near the beach that takes favor items that I have yet to work up. I hear whispers on the wind of a new mountain dungeon. One with new story hooks to beg the interest of high level players.

Other storms have plagued the land, but these of a temporary nature. I was stuck in Kur at the time these ‘bugs’ struck, but I heard it was pretty crippling. I suppose a world cannot grow this fast without some hiccups.

Back in Serbule, I saw what could only be the results of one of these bug storms, leaving a wide open area in town.

Again, I shadowed residents and listened to conversations. Mushroom guy is still crazy as a bat, and I swear the fire mage has it out for me. To hear the ladies at the inn talk makes me glad I am not a bipedal male in these parts. But they are good for gossip. Apparently folk are being conscripted for construction work for some kind of housing. Not just to fill in the empty area in town, but in other areas as well. Could it be that we won’t have to bunch up in barns and inns anymore? Oh no, this won’t come to us for free. Some say it will be an early settler’s deal. Some say that it will be rewards for bounties collected. Others say its nothing but a fanatical pyramid scheme and to stay away. At any rate, this town could use a good Kick Start. I am all for it. And while we are expressing opinions, I still want visible cow armor. -stomps about- And chairs you can sit in. And Music! Sure, dancing while we are at it, why not? What, you don’t think cows can dance?