Another model revealed, and my heart throbbing another time! They are always chicks, aren’t they! They are just too gorgeous not to fall in love with though, so I apologize. Before we discuss, check out the side by side comparison of the Night Elf Female Model!

Before anyone even considers these to be less than amazing take a good look at that image. I don’t know if they made the previous version a little blurry on purpose or maybe its my eyes experience comparison phenomena, but it is UNREAL how much better that model is. Its not even on the same planet, as far as I’m concerned. Especially the hair.

The first thing that caught my attention though, was the way the lips looked. At first I thought they were really going overboard making these large purple lips, but after the side by side comparison was released I suppose I have just never noticed the difference. This is important, because its something we fail to realize, and complain about anyway.

Recently, I saw a group of people saying that despite Blizzard’s best effort, their character does not look or feel anything like their previous one, and they are upset about this. Well I can’t speculate what my paladin will look like when this is finished, but I promise you, I will enjoy it. Maybe it will be jarring to see a character that I’ve played for 6 years and logged 1 year played on to look somewhat different, but I essentially never look at his face, and rarely even pay attention to its details. I will be happy to see all the players running around with these models, no matter what we looked like before. It will really do SO much for the graphical fidelity of the game, and that’s what really is important.

The other thing to really take not of is the expressions in her face, and how amazing they are. We spoke about this when discussing the Tauren on, and despite your stance on them, you can’t possibly say they are anything less than works of art. 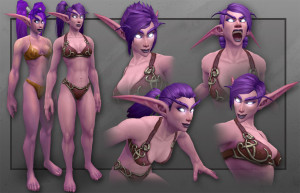 See the ferocity with which she screams, and the cunning with which she prowls. This will soon be your character, compared to the paltry sense of excitement the previous versions showed. It too is not even on the same level, but I spoke enough about animations in previous articles.

For now, let’s just bask in the glory.

Another great thing I immediately see is her muscle definition, especially in her core region. It has been obvious that Night Elf Women aren’t just house wives, and are likely even more brutal than their male counterparts. We have seen them as true huntresses, and now this relates this feeling all too well. Especially because most clothing on female character leaves some room for midriff, this will be a prominent display of the level of intricacy that has gone into these models.

I know it may seem petty as well, but I do really like the fact that they have added some flair to the undergarments. Not that I see them all too often, but its good that they recognize that is as much a part of the model as any other feature, especially if they are spending time on muscles that are also hidden by gear.

Anyway, what else is there to say. I hope you guys enjoy these previews as much as I do. I can not WAIT to see more, and I certainly can not wait to see them all running around together in game. It will really change the way the game looks. You’ll be surprised.