The King Is Never Late You Are Just Early!

The King is never late you are just early!​

King Blackthorn: As usual let us begin by going over each governors reports. Sonya what have you to say regarding New Magencia?
Sonya Kristoff: Here is the report for the City of New Magincia. The city coffer’s fare well. The current treasury balance is just over 480 million gold pieces. This is due to the current trade deal with the Guild of Arcane Arts and the local citizenry fighting pirates and returning cargo to the town. I have been asked if we can build a more permanent structure for the blacksmith’s and tailors of the city. Currently they have only a roof over their heads at the moment. While this is great to keep the rain off of their heads, a permanent building would allow them to take on more complex projects. We have also been very successful at maintaining open sea ways for contact with the mainland and to continue trade with the other cities as well. But the pirates do make minor expeditions costly. While Osiredon the Scalis Enforcer continues to be a bane on the docks on New Magincia the citizenry continues to defend the city from this scourge. I would also like to see if we could provide some sort of defenses against this threat to make the citizens feel safe and secure. thus ends the report for New Magincia, Sire

Cinderella: Minoc has a city balance of 700 Mil. Currently we have been assisting other cities with the undead in the cemeteries. Our citizens have been taking day trips to other farms for pumpkins to carve. And speaking of citizens, The Golden Pick Axe welcomed Nana the Mining Cooperative Merchant. Nana is the one who brought Ethereal Sand to help with the invasion of the soulbound creatures. Since her arrival, alchemists across the lands have used her product to craft ethereal soulbinders. They are to be carried when killing these soulbound creatures. We are to take it to the fellowship so that they can cleanse the souls. We are rewarded for our heroic acts and are able to pick our own reward. Unfortunately Nana was called away, but her associate Jessica has taken over. So if anyone is still needing some ethereal sand, she would be happy to help them. Also Samson our harbor master would like to thank everyone for the deliveries of fish. Thus ends the report for Minoc 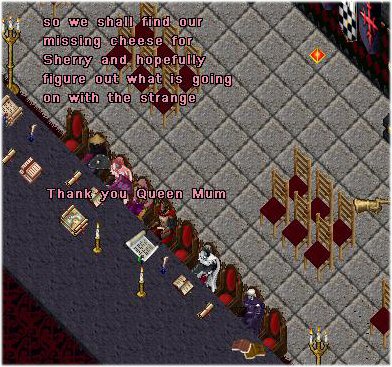 King Blackthorn: Thank you for your report Cinderella. Queen Mum what have you to report tonight?
Queen Mum: Been a busy month for Britain, with the harvest of the farms and dealing with the Britain sewers, seems we may need bigger rat traps and the dungeon underneath your castle is blocked
King Blackthorn: Are you saying we need adventurers to go down and fend off creatures down there? *smirks*
Queen Mum: We went down there hoping to find our last shipment of cheese but had no luck and had to move quickly when realizing how nasty it is down there since all this started and were directed to the dungeon but we could not get through so we shall not find our missing cheese for Sherry and hopefully figure out what is going on with the strange situations binding Britain. That is all Sire.

Dezerai: *clears throat* Here is mine report, right now the city’s treasury balance is well over 900 million. The city’s buff is a +2 MR, Merchant’s Association. The Guardian of Moonglow, The Void Dragon stills sleeps. Chief Giggey is always on Duty to protect the Citizens of the City. The Zoo sends it thanks with the capture of the Escaped Mutant Turkey. I am sad to say that the Menace of the Moonglow graveyard has rises as more and more undead arise and are escaping from the area there by causing great stress on our citizens. I understand that Moonglow is not alone here and I ask we all take steps to put this down as quickly as possible. The Lone Gold Hungry Mongbat statue is still attracting it share of Visitors, mostly mongbats. Willebrord and Selcius the astronomers are still star gazing up at the heavens above at the Moonglow Telescope. The Encylopedia Magicka, Portal to our sister city Papua is clear (Resdu) as well as the return to the portal (Recsu) . The Lycaeum, Moonglow’s school of Magic is doing well, Herald the Wise reports over another 1000 students have graduated. Chief Giggey is still investigating all that was reported last month and the month before. The true book of truth is still well guarded under the Lycaeum. On the Lycaeum Annex, Tower of Sorcery, I must report a kidnaping of three key err People, all are missing. Lazarus the human fisher, Zanby the Mongbat Banker, and Reebon the undead mage innkeeper.

Dezerai: Now Janitos the Orge The GateKeeper, Varsuvious the Sea Serpent Stable Master, Kendrick the human Mage are asking that you please help with the safe return of all three. Poor Kendrick the human Mage is so sacred now that he is hiding in a corner. Coors are 73o 7N 133o 15W right behind Encyclopedia Magicka (Trammel) Thus end this report Oct 13, 2019

King Blackthorn: Thank you for your report Dezerai. We will look into the missing
That ability does not seem to work here.
Dezerai: we are thankful that you were not kidnaped as well
Lavendar: Aye
King Blackthorn: Lavendar what have you to report tonight?
Lavendar: Hail Your Highness Vesper is fairly peaceful in the township itself. Thanks so the efforts of citizens and other Governors in reclaiming cargo from the pirates, our coffers stand at 630 million so we can continue our trade buff, guild of arcane arts, for some time. I also want to thank those folks who have been mining sand and making bottles to capture the soulbound creatures that have plagued our lands. I did go to the graveyard today, to place flowers on a grave and was attacked by a giant creature called a Butcher. I fear the graveyards have become a fairly dangerous spot to visit. We have also been enjoying the harvest of pumpkins and very glad to have those for making pies. That is all I have to report this evening other than to say we are all greatly relieved we do not need to summon the Royal Guard we were in fear you had been kidnapped as well!

King Blackthorn: Thank you for your report
Lavendar: Thank you

King Blackthorn: I do have a report myself. With Halloween fast approaching, as you have seen the dead have risen and other creatures have started to also appear. I have heard rumors of creatures that only ever come out during this time of year creatures not of our realm.
Queen Mum: *gasp*
King Blackthorn: They come from a place that has only ever been described as the upside down
.
Dezerai: *frowns*
Cinderella: *shivers*
King Blackthorn: from the few who ever went there and managed to return. Creatures they called the demogorgon and mindflayer to name a couple. I hope that we do not have to deal with such things but only time will tell. I have also heard of reports
Queen Mum: *sound nasty to deal with*

King Blackthorn: of citizens gone missing and webbings found in the last place they were seen, so keep your loved ones close and safe, warn the citizens to keep a watchful eye. I will have scouts sent out to keep an eye out as well. That concludes what I have to say tonight
Queen Mum: *will do Sire*
Dezerai: *nods*

*No one had anything to add*
King Blackthorn: Then I will call the meeting to an end.