Ok, so I realized what I was doing wrong and why my DPS numbers from yesterday were off.  If you don’t run Cstats while playing, it has no concept of time and is just crunching on pure damage (still helpful, don’t get me wrong) but I wanted to get some more comparable numbers so I ran it again.  So the workflow is similar to what I said yesterday, but once you turn on the combat tab logging you then need to alt-tab to cstats and start parsing.  Then return to LOTRO and fight stuff.

So the snap below shows me checking out my archer DPS – notice each “encounter” has a separate folder so it will show all the mobs you fought during that section of combat.  As you can see my archer is at least better then the mobs, but still no where near my DPS – which is fine as she’s still pretty weak.  The batch there under Moria is another log file that I opened such that I could easily compare Tier 1 skirmishes to Tier 2 and now that I can see DPS it is very clear that for Tier 2 mine decrease and the mobs increase.

Drilling down to my section you’ll see a similar breakdown as what I showed yesterday. 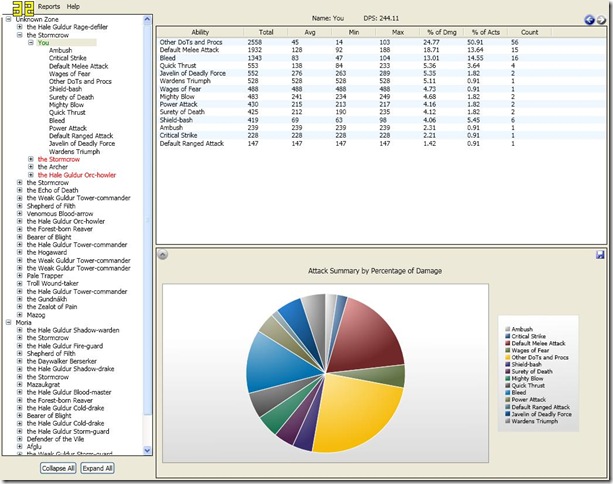 I also used this to do a comparison on my Level 65 3rd age vs my Level 60 1st age and pretty much proved to myself that yes I need to switch to a 3rd age.  My damage is at least 10% higher with the 3rd age even though I don’t have all the same damage legacies.  Plus with the added runes I will have a much higher crit as well.  I probably won’t switch my javelin out yet as I don’t use that nearly as much nor have I found one anywhere as good.