DevBlog #860: Incarna in the flesh

CCP Chilidad shares his latest exploits in the process of delivering Incarna for the craving, hungering masses of capsuleers. And this time it isn’t just hype!

While we’ve all seen the new character creator, shiny new avatar images (if you’ve logged in!) and presentation videos, this time CCP actually presents us with a set date for “Walking in stations”. “Captains Quarter” is intended to be pushed to Singularity before Fan Fest (March 24-26 2011) and rest of the feature following in the staggered implementation pattern that I’ve mentioned here. Thats not really that far off, its only another … wait … 5 weeks?!?!!!111oneoneone

But, dude … relax. They made all of this ages ago! We’ve allready seen the videos!

Yeah, well there are still some features that wasn’t on those videos. Just read the blog!

I am CCP Chiliad, representing the teams working on the first Incarna feature coming your way. Last time I worked on EVE directly was with the Apocrypha expansion on Tech 3 ships, New Player Experience and the Skill Queue. CCP Zulu asked for our help from the Atlanta office in order to keep solid focus on developing EVE as you currently know it and still push Incarna out into open–so here we are.

We now have the technology and designs together to a point of convergence where Incarna can be done right . Reality has caught up with our vision. Where the technology hadn’t existed yet, we’ve pushed it and given the reality a helping hand. This January we demonstrated this with the new character creator, unlike anything seen in any computer game. Like James Cameron dusting off a 10 year- old manuscript, unfeasible in its own time, we are now ready to start a conversation with you on the very concrete, deliverable features being worked on. And it’s not a barely concealed retelling of the Pocahontas story…

This dev blog is specifically about Captain’s Quarters. It’s coming to Singularity test server before Fanfest and hitting Tranquility and your computers this summer. We’ll be talking about design details and technical aspects in later dev blogs and Fanfest is where we’ll uncover what will happen after this feature. As CCP Zulu mentioned in his last dev blog, Incarna will follow a similar staged deployment strategy as EVE Online: Incursion is currently using—namely more frequent, smaller deployments of polished features rather than having you wait for the big expansions.

Captain’s Quarters are your place of power, center of your control, operational nucleus, living room and home office. They are the dusty motel room for the vagabond capsuleer. Whether docking your ship to a station or entering EVE for the first time through the character creation, you will enter the Captain’s Quarters as the living, breathing EVE You. It’s a new dimension of immersion. For all players ( the future newbies/future points on your killboard), it finally gives EVE a human face, a sense of familiarity to “real life” and other games.

I’m a big fan of sketches and work-in-progress material in general, so I’d like to show a bit how we’ve progressed with the feature so far. This is one of the first pieces drawn about the Captain’s Quarters by yours truly and CCP Hellmar himself, utilizing only the latest in software development technologies and tools: 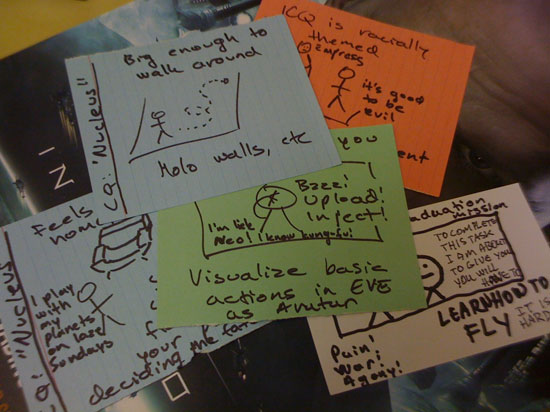 This is where we started off defining the Captain’s Quarters, discussing it with our game designers, content, art and engineering guys.

We are changing the experience and perception of EVE from a complex and abstract space ship game driven by Excel sheets into a true science fiction universe. This is a completely new level of connecting with your character. In EVE your character has always been actually more *you* than in almost any other game. It’s always been your personal skills, knowledge, risk assessment and persistence that made your character a personality, an alliance leader or a rock star of EVE. Incarna will only magnify this.

After gazing upon the scribbles and story cards, CCP t0rfifrans raised his fist to the thundering skies and bellowed a true Viking cry, “On-turning!” and our actual artists stepped in. We started off with the Minmatar version of the Captain’s Quarters in a very organic process between modeling and concepts while designing the full functionality: 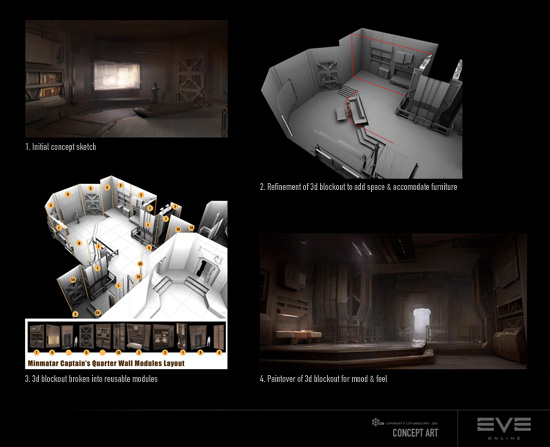 Captain’s Quarters will offer interactions in the 3D space like slouching on your sofa and clicking an interface on the wall to bring up the planetary interaction (PI) interface, customizing your appearance through a vanity mirror and adjusting your fittings through a holo-model of your ship. There are a couple of very slick, completely new features we’re also bringing in but we’ll talk about those in greater detail in future dev blogs. These first Captain’s Quarters are designed mainly as an entry level capsuleer environment with basic functionality. We are also reworking the new player crash course into an epic arc that works with the Captain’s Quarters while also improving on some existing features and content tools beyond Incarna. To fans of Aura we’ve got some good news. She will make a come-back after losing her voice in the Apocrypha expansion. We can rebuild her.

3D buttons aren’t an impressive technological feat, yet the interactions in the Captain’s Quarters allow us overcome some old, persistent problems newbies currently have with the complexity of the EVE UI and goal setting. For example, by placing a Corp Recruitment console on the ammo crate you rest your feet on, we can explicitly tell a new player how important it is to find a good player corporation in EVE. Captain’s Quarters allow us to highlight, hint at and expose existing EVE content and gameplay in a very intuitive way without forcibly dragging them along with lengthy tutorials.

Another big change is that the current station hangar will be replaced with an enhanced balcony view where your character can gaze upwards at the majesty of your vessel as it looms above you inside the station. When you dock you will appear on the balcony by default. One important requirement in our approach to Captain’s Quarters is that none of it will get in the way of a veteran player. You can dock, repair and refit your ship, dump your cargo into your hangar inventory and talk to agents with the same ease as you currently have. Throughout our discussions, the Council of Stellar Management (CSM) has been adamant about this as well as about the load times when docking. Our UI guys are working on some pretty amazing things, and they will keep the current usability very much in mind, aiming to further improve it.

Normally our art workflow involves one or more initial concept sketches to get the idea of the space-to-be-designed to match with the intended game design and functionality. Once these sketches are approved, a rough 3D blockout is made to make sure the dimensions are proper and that walking around the space can be tested in the client and it feels right. A more refined paintover of the 3D blockout is done to nail down the lighting, mood and general design. Finally the blockout is broken up into modular, reusable components that allow us to change and fine tune the space on the fly even after the actual assets have been produced. Here’s the progress for the walkway leading you from the Captains’ Quarters to a balcony overlooking the station interior and your currently active ship: 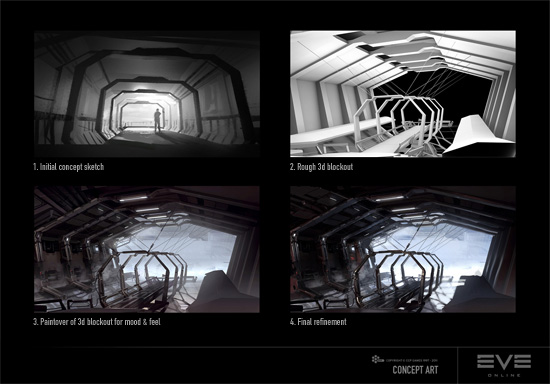 In this first stage the Captain’s Quarters are going to be single player, private environments. There are two big reasons for this.

With Captain’s Quarters, we are introducing an immense set of new technologies into our codebase. As a spaceship game, EVE Online never had to deal with high fidelity character animation, interior lighting and rendering, terrestrial object interactions and camera systems, user interfaces designed for avatar-based gameplay or the tools to pull all of this off efficiently. This first feature is a battle test for all these technologies, rendering and delivering the environments and characters, our internal work processes and matching the quality of the character creator.

The second reason is that the last thing any of us want out of the introduction of Incarna is any detrimental effect to existing gameplay, server performance and other unforeseen but possible side effects in an environment as complex and interwoven as EVE is. We’ll be taking our first steps with Incarna with a lot of care. Once the feature has settled, emergent requirements become visible and the new technology has stabilized we’ll be ready for other future Incarna features.

So, this is Captain’s Quarters. What you’ll see first on Singularity is the stripped down essential core of what’s to come. There will be more to them in time, but while we’re making that happen we’d love to hear how this sounds so far and what you’d want to see in Captain’s Quarters this summer and in the future. We’ll be reading the comments to this post and answering the questions we can at this point.

Fanfest week and getting this feature to Singularity are big milestones for us. As with the new character creator, until you actually experience it on the test servers for the first time and walked through the guts of a station, it’s hard to imagine the impact of the feature. But, you will be amazed what it does to how you feel about EVE.

Can’t decide what CSM candidate to vote for?