Pax east is coming up next weekend and Bioware will be showing some never before seen content, including the mid-game Republic Flashpoint, Taral V, Also scheduled are a series of presentations and Q&A sessions with the development team.

As this is obviously a very exciting time for SWTOR fans we here at Stratics will be covering the news as and when it happens, so remember to check back often for the latest updates.

For now though, lets see what Bioware has on the agenda..

PAX East begins in just one week and Star Wars™: The Old Republic™ will be there! If you’re heading to the show, all you need to remember is to visit Booth 912. Our show floor Booth hours are:

Even if you can’t make it to the show, we have some exciting events planned that we want to tell you more about. Read on for all the details.

Hidden deep within the Maelstrom Nebula, a top-secret Imperial prison holds a Jedi Master who is invaluable to the Republic war effort. As part of a Republic strike team, you must assault a heavily defended compound on the jungle world of Taral V… 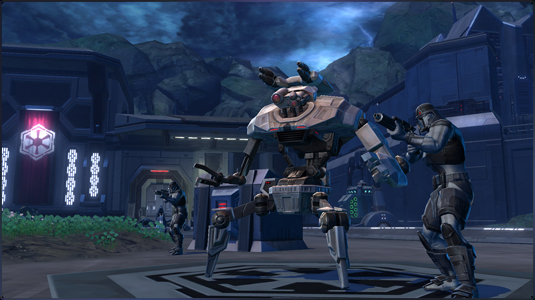 Inside the main PAX East exhibition hall, visitors to Booth 912 will be among the first in the world to play the mid-game Republic Flashpoint, Taral V! Taking the role of a Trooper, Smuggler, Jedi Knight or Jedi Consular, you’ll team up with other players in an extended hands-on gameplay experience. This is a challenging mission which even MMO veterans may find difficult, but we will prepare everyone who plays with a tactical briefing at the booth.

A Flashpoint is a challenging, cooperative mission that takes place entirely within an instance, which only your group can enter. Visit the Flashpoints Game Systems Page and the Building Flashpoints Developer Blog to learn more and to watch previously revealed in-game footage of Taral V.

In addition to fighting through the Imperial forces on Taral V, visitors who want a briefer gameplay experience – or just find themselves drawn to the Dark Side – will get the opportunity to play on any of the Origin Worlds of Star Wars: The Old Republic.

For the first time at a consumer event, all eight of The Old Republic classes will be available for attendees to play, including the much-anticipated debut of the Jedi Knight and Jedi Consular. From the heavily armored Republic Trooper to the Force-wielding Sith Warrior, everyone will get a chance to experience the unique story-driven gameplay of The Old Republic.

That’s not all! Once the show floor closes on Saturday, March 12th, the Community team for Star Wars: The Old Republic will be hosting a Community Meet and Greet event at the Westin Boston Waterfront hotel, conveniently located right next to the PAX East convention center. Come along to meet the Community team in person, your fellow Star Wars fans, and of course members of the Development team. We’ll bring the food and drinks!

Entrance to the Community Meet and Greet is by invitation only, and capacity is limited. Visit Booth 912 to pick up your invite, but arrive early to ensure entry.