Article three in a series on human culture in Massive Multiplayer Online Gaming.

The one thing you can count on when human beings take their culture online is unexpected consequences! As online games first appeared and then Massive Multiplayer Online Games (MMOG’s) gained popularity in the 1990’s this “rule” was very much in operation, sending development teams spinning more than once as they tried to put a stop to damaging consequences, encourage other surprising forms of expression in games, or to start regulating a developing black market for game gold or items. To this day unexpected results are a frequent topic of questions and discussions on game development, and regulation of this aspect of human interaction is a high priority. 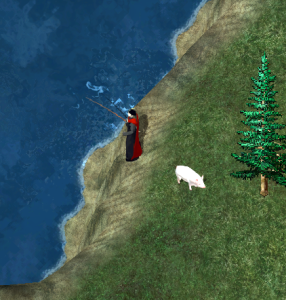 Eliare the fisherwoman in Ultima Online.

Games were designed to spin around heroic conflicts or even just simple socialization with activities. Richard Garriott reported in an appearance in Warren Spector’s Lecture #12, that he was astounded to find that things like completely unadorned, 50/50-chance fishing activities were very popular aspects of a game like Ultima Online, but had been totally unintended as a player profession. Also, in-game player trading and rudimentary player economies developed despite the fact that no actual player to player trade economy or mechanics had been developed yet. (Warren Spector Lecture #12, http://www.youtube.com/watch?v=JBjUdnAt1GM, 1:44:00.) It seems that player economies and professions may be fundamental elements of human culture online and that creative player pursuits will sprout up even when the game mechanics for it haven’t even been set in place.

In addition, the fast response time a MMOG population exhibits to a change in its environment becomes a seed bed for human experimentation and interactions – both positive and negative. I have seen many a young person experimenting with social boundaries in behavior as they grew up inside the games they played. The same goes for larger social experiments, something that was also noted in Richard Garriott’s appearance in the Warren Spector Lectures series when they discussed the US Department of Defense’s interest in the environment of a MMOG to see how humans responded to various social stimuli. Speaking to that interest in MMO’s, Richard Garriott said, “As a place to simulate cause and effect, MMO’s represent a very interesting platform.” He also stated that, “The science of our industry absolutely has broad-based applications in, uh, social experiments like that.” (Warren Spector Lecture #12, http://www.youtube.com/watch?v=JBjUdnAt1GM, 2:44:00.) 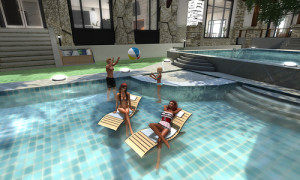 Unexpected consequences have even been used as the very foundation of MMOG play in the form of Second Life, to use an established example. Second Life, which celebrated its 10th anniversary in June of 2013, gives you the ability to create your own world along with an ability to earn money. Their in-game currency, “Linden Gold,” has a pre-set trade value to the American dollar, which allowed them to skirt some of the economic issues faced by other MMOG games. In addition, its coding tool set allows players to produce and code their own environments. The entire MMOG game-play is then one huge human creation sandbox that attracted even corporate participation and advertising inside the game. This game is very much about encouraged “unexpected” human activity. 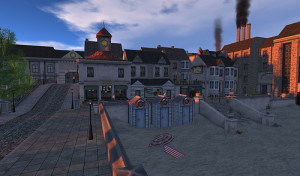 Unexpected consequences took a turn for the criminal apparently in a now-closed version of a Sims game. The security technology blogger Bruce Schneier reported that a group developed in-game that extorted game currency from subscribers by using a player feedback pathway to refer to “trusted” and “untrusted” personal contacts. The “Mafia” members would mark a player “untrusted” unless they forked over their hard won game currency, leaving them unable to build a reputation for in-game property procurement or game business transactions. Needless to say, this wasn’t good for game play (http://www.schneier.com/blog/archives/2009/11/virtual_mafia_i.html, November 25, 2009).

Unexpected consequences are normally not so negative as the incident I described above. In my own game experiences I have often found some positive unexpected consequences, leaving me in amazement at what humans create for themselves. Unexpected consequences of human culture online are spawning new games, new social communities, new pathways for education, business development, and promoting cross-cultural friendships – all big benefits to my thinking. I think that many others outside of myself see unexpected results as opportunities as much as any issues to be dealt with. When Richard Garriott discovered, to his amazement, a dedicated fisherman in Ultima Online he reported that he thought at the time, “Wow, this game has gone so far beyond what we had ever anticipated it to become!” (Warren Spector Lecture #12, http://www.youtube.com/watch?v=JBjUdnAt1GM, 1:45:30.)

You can hear Richard Garriott and Starr Long relate their own thoughts on human culture in their created games as I interview them live online this Sunday at 5:00 pm EST (GMT-5). They will be appearing as a part of our Stratics’ 16th Anniversary celebration! Come tune in to Stratics while we broadcast between 2:00-8:00 pm EST (GMT-5) with these two interesting men, as well as a whole list of other movers and shakers in the gaming industry!

Starr Long and Richard Garriott of Portalarium, Inc.’s Shroud of the Avatar, will be with us on Sunday, October 20th at 5:00 pm EST (GMT-5).

Foundry Screenshot of the Week

Knight of the Blazing Sun