Stratics proudly participated in the Extra Life charity event last weekend, where staff “worked” to raise money for Children’s Miracle Network hospitals. Extra Life 4 Kids is one of the largest, gamer-supported charities in the world. It allows players to band together and encourage sponsors to support them during 25-hours of streaming various gaming titles to a mass audience. Team Stratics’ participation in the event was organized over a period of weeks by Stratics staff members Shamus, Cirno, and Kirthag.

Team Stratics had 9 active participants: Cirno, Shamus, Kirthag, Watchertoo, El of LA, Tazar, Flair, Luka, and Taylor. During the 25-hour period, the team played a variety of games including, Guild Wars 2, Diablo III, Ultima Online, Saints Row 4, Firefall, DC Universe Online, The Sims 3: Into the Future, Ragnarok Online 2 and more. Lady Tia, Pinnique and, I took on supporting roles to keep everyone motivated throughout the event.

Cirno led the event, streaming to Stratics’ official Twitch channel, which was embedded on StraticsTV (http://stratisc.tv). Viewers were able to watch other participants’ streams by highlighting each participant’s name in the menu bar above the primary stream. Team Stratics kept morale and conversation going in TeamSpeak with mostly high points, despite learning that the Extra Life donation site came under a few DDoS attacks.

In Guild Wars 2, Cirno led me on a Halloween tour with some side adventures to reveal new waypoints and vistas. Taylor and Shamus joined us a bit later for more Halloween fanfare. I leave you with the devilish spirit that is Cirno to round up my tour and teach me that G is for gullible.

ut wait! Though the actual marathon event for Extra Life is officially over, we are just shy of our $1k goal, sitting at an even $800.00 USD. We still have time to up our donation contributions for the Children’s Miracle Network hospitals. Please take a few seconds and share us with your friends and help us accomplish this goal! Click the cog and become a Hero, its never too late! 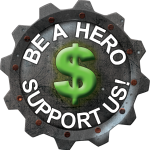 Game with Stratics for the Kids

Sadly Return to Ostagar is delayed