Scarlet Blade: I’m a Girl and I Peeked

Let me start by saying I really don’t like anime games. There is something about those big round eyes that makes the games feel so cartoon-like. My preference in gaming is to be immersed. The goofy graphics are too distracting for me. Having said that, I decided to check out Scarlet Blade by Aeria Games. I’ve been wrong before so maybe Scarlet Blade will have enough interesting content for me to get past the big goofy looking eyes. Scarlet Blade is a free-to-play MMORPG with partial nudity so it has an M (mature +17) rating. It’s described as “an adult MMORPG”.

This prompted me to create an account on the Aeria site since I had not been there before. I got past the requirements, being slightly over 17, then started the 1.9gb download. The download turned out to be the Aeria downloader (similar to the Steam interface). After it installed, it automatically updated my game with 17 updates which I always find annoying – why not put the most up-to-date version of the game on the download button? While watching the game update, the splash screen mentioned something about “AP” points. Not sure what’s that’s about but we’ll see.

Once the game was done downloading then updating, I was presented with a splash page that had a 90% naked woman on the screen. Her most private parts were covered with mechanical wires. After that, there was a funky key pad in which I had to create a “secondary passcode.”  So I had to create an account for Aeria with user name and password and a secondary passcode for the game itself. It seemed a bit annoying to finally get in to play this game. Too much unnecessary security, in my opinion. 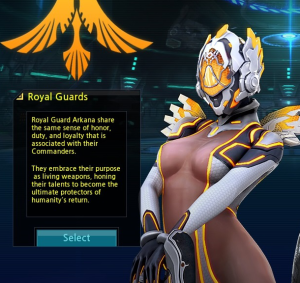 Finally I got to the server selection which had just one choice. I clicked the server and hit Enter and nothing happened. I had to double-click the server to progress forward. So obviously there are some bugs right at the start.

Next up was to choose the path I wanted to take.  I choose the Royal Guards, not wanting to rock the boat right away. Again I’m seeing nearly naked women, which as a woman, I find rather offensive. 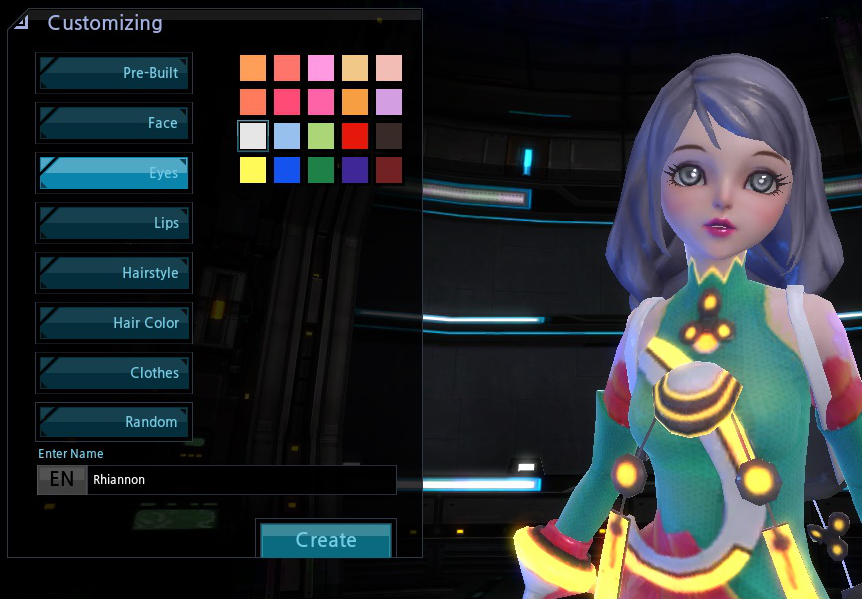 Next up was character creation which was pretty basic. You could choose pre-builts but I did a little more customization to hopefully get a little less cartoony look as possible. No way around the anime eyes. Rhiannon was created.

Well, almost created. The character name “Rhiannon” was already taken. So apparently unique names are required. I added some numbers to the name and we were off.

Someone named “Mother” welcomed me and said quests would show up on my screen. She told me to go see someone named Lota. The interface is quite cluttered so I hope I can find my quests!

I found a flashing blue icon that upon double-clicking proved to be a quest that said something about going to see “Lota”. There was an on-screen map that had a dot on it. I followed that and found this chick named Lota. She gave me a quest to go see Vera. Notice that her outfit is nearly transparent. Not liking the overtly sexual characters thus far.

In my quest log, I clicked on “Vera” and my character took off running to Vera (I guess). I auto-ran to Vera. Vera gave me a gun and told me to go kill some training dummies. She gave instruction on how to do that. Basically I just had to double-click from a distance and the creature was killed.

Finally I was allowed to go “up top” and was given a series of simple quests to accomplish. Kill 5 of these, kill 3 of those. The world looks sci-fy like, at least in this beginner area. When I was told to kill X number of a certain kind of creature, the other creatures ignored me. So there seems to be no AI in the game that I could see. 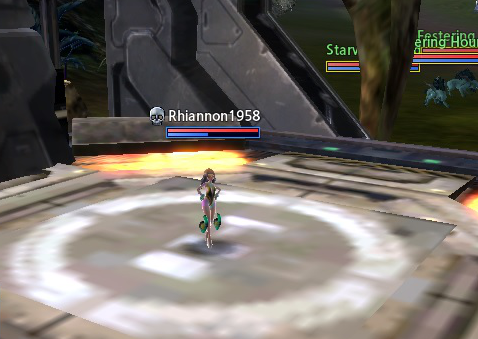 So I set off to see what happened when I died. I attacked a creature then ran off to attack another. Both attacked me at once and I was killed. When I died, it gave me a resurrection count-down clock. I clicked Revive and was transported to an area that appeared to be close to where I was when I died. I stood there to let my hit points regenerate.

Upon having full health again, I tried to attack the creatures nearby and got a message that I had been “kicked off the server”. I was unable to get back in. I suspect the game had crashed but I’m not sure.

I am unclear on who this game is designed for. Certainly not middle-aged female players. The graphics of nearly naked large-breasted women were very offensive. I didn’t see any options to play as a male character. Since the game requires aged 17+, I personally don’t understand who their target audience is.

The game play was basically point and click. Double-click a monster to attack it, enough hits and it dies. A new quest pops up on the screen. Click it to go to that location. Very boring. The game screen was so cluttered, it was difficult to see the monsters that were near me.  I didn’t see any instruction on PVP but read that it is part of the game. And there were some players in the general chat that were smack-talking about the newbies who “didn’t even know how to PVP.”

After not being able to log back in to the server, I lost my patience with it. It appears that this game has been up and running since the beginning of 2013 so there must be some reason. I just don’t have the desire or patience to find out why. There isn’t enough here to get me past the anime graphics along with the mostly naked women.

Neverwinter in the December 2012 issue of Game Informer!