Medivh, last guardian of Tirisfal. The feather adornments on this key lore characters shoulders should be no surprise to Warcraft 3 and World Of Warcraft players instantly, yet not all of his lore is quite as common knowledge as most people would think.

Eight whole centuries before the coming of the Orcs, Aegywn decided to birth a son, so that she could pass on her powers and ensure the line of Guardians for new generations to come. In this pursuit of lust and her need to do all she could to continue her lineage she settled on seducing the court conjurer, one Nielas Aran. A competent human mage of the Order of Tirisfal, one capable of supplementing the power she would pass on to her son and also noble of heart.

Magus Medivh, born a human son to his mother, Aegwynn, the former guardian of Tirisfal (Guardians are an order of powerful mages, blessed by the Order Of Tirisfal, an elite covenant specialising in dealing with protection of Azeroth from the Burning Legion over millennia). Medivh was left to be raised by his father in Stormwind Keep and would be taught the morality and respect for his power, in the hopes he would learn compassion when he became a powerful mage. He became friends with other important lore figures, such as Prince Llane Wrynn and Anduin Lothar. On a day out with his friends Llane and Anduin, the three were ambushed by three jungle trolls. None of the three were hurt badly and there battle was not too much of a risk for the trained Princes, however Medivh fell ill and fainted when he tried to use his magic to defend them. In his sleep he entered a coma, only to awake later with nightmarish visions of death.

Medivh’s life was filled with torment and anger as he tried to discover to what his power should be used for. Sadly inside the womb of his own mother, this fate was already pre-determined, as Sargeras cursed his mother for her thwarting of the demon lords plans prior to the 3rd war, and so corrupted her unborn son, so that he would do the bidding of the legion regardless of his upbringing.

This fate manifested itself as Medivh neared the age of his ascension, when he would graduate to becoming a fully fledged mage; He met with his father after this coma-like state and unintentionally entered a powerful trance with him. When the two touched they both entered a coma like state, which eventually lead to the complete drain of energy and magic from his father after several days, transferring his power to his son and causing Nielas to die in front of him.

(To this day, Nielas exists in-game as the ‘Shade of Aran’ boss within Karazhan, a 10 player raid instance on the Eastern Kingdoms.)

Medivh soon became entranced with the idea of the Legion, and the respected powers that lie dormant in such mysteries and proceeded to experiment on dark energies and unusual forces mortals are usually unable to reach. Medivh was no ordinary mortal human, he had the blessing of Sargeras, and the power of the Order behind his resolve.

Eventually Medivh’s possession forced his mind to want to be free of everything, as sought in his madness to destroy Azeroth and the people around him. He found an answer in the Orc Gul’dan, a powerful Dark Shaman, already possessed by Sargeras off in a distant world known as Draenor. Medivh contacted Gul’dan and promised the Orc the location of the Tomb of Sargeras as a reward for killing the humans and laying siege to Azeroth. (This Tomb he refers to here is actually the Temple Of Elune, which lies within the ancient Kaldorei city of Suramar, the very same city Illidan, Malfurion and Tyrande all grew up in prior to the Sundering.)

Gul’dan agreed, and the promise of power allowed the two to use the power of a dark portal, and ancient gateway system that connects world throughout the stars above as the instrument of the coming of the Orc forces to Azeroth.

In the time of this madness, Medivh had convinced his mother, the Order of Tirisfal, and the mages of Dalaran that he was fine, and that his momentary comas were the inability of his own comprehension of power, and that now he had control.

In response to Medivh’s upbringing and graduation to becoming the powerful mage he now was, they sent him his very own Apprentice, a young mage called Khadgar. Khadgar would then live with Medivh at his castle, Karazhan, a place where he would learn his master’s art and learn to be powerful under such names as Moroes, who would be Khadgar’s aide.

In the course of madness, Medivh succeeded in opening the linked portal between Azeroth and Draenor with the help of Gul’dan and his own Shadow Council. This moment caused the appearance of his mother, Aegwynn, who tried to convince her son that this course of action was wrong and what he had done would undo the world. Medivh ignored her and continued with the rituals. She decided to stop him by force, and the two battled. Medivh had trained his power, and now sat on the forces given to him by Sargeras, which caused the balanced fight to break in his favour, defeating his mother and burning her alive in the aftermath of the conflicting magic’s.

This drained Medivh heavily and after concluding the business with Gul’dan and ensuring the link was established he retreated to Karazhan for rest, meanwhile the Shadow Council went back through the Dark Portal to Draenor to prepare an invasion force.

Arcanagos, a Blue Dragon has seen Medivh’s misuse of magic, of which the Blue Flight controlled and paid a visit to Karazhan in the hopes of confronting the Guardian of Tirisfal. Medivh, again refused to listen to the dragon, and they entered combat, which lead to the burning of the dragon from within, the power to great for the whelpling to survive. This dragon would later be resurrected as the formidable raid boss; NightBane within the Karazhan 10-player instance in WoW. Medivh was reeling from the past years conflicts, his mind in tatters after the death of his father, his mother by his own hand and now the meddlesome Blue Dragonflght.

Soon after, the Orcs of Draenor had pushed on with their invasion and had successfully established forward perimeters within the Human borders in Black Morass, a zone situated between what would now be known as Blasted Lands and the Swamp of Sorrows. The Horde’s emissary, Garona Halforcen came to Karazhan to see the mage. Secretly however the two fell in love and had passionate encounters throughout her visits to the castle, which would later result in the mixed-race child Med’an being born into the world.

Eventually Khadgar would be the one to realise his master was the cause of the Orcish invasion and entertained an audience with Garona, Lothar and King Llane in an effort to find a solution to the crazed fallen Guardian.

The three agreed that something had to be done about him, and that his tyranny would only regress further into the depravities of the Burning Legions corruption. They entered a battle with Medivh promptly after, but they underestimated the powerful mage before them.

Upon entering the encounter, Khadgar, whom was only 17 years of age suddenly aged several decades older. Lothar and Llane struggled on in the fight, but were ultimately defeated by Medivh, whom was to end their lives had it not been for Khadgar taking up Lothar’s blade and thrusting it through the heart of the Guardian with all his strength. Upon this deathblow, Medivh was released from Sargeras’ curse that had since been on him since his time in the womb. His mind recalled all the horrors he had committed and very literally his life flashed before him as he died.

The curse left his body with such force it cursed the very area around them, the heroes who defeated the fallen guardian fled, as Karazhan became a corrupted, twisted remnant of the Guardians corrupted hatred driven by Sargeras, which became the raid instance we know to this day.

The end of Medivh’s story with corruption ends there, however it was known that when Khadgar had destroyed the spirit of Sargeras that held his master, Medivh’s spirit was said to have escaped. This spirit foresaw the eventual downfall of Lordaeron, and with his mother’s help his spirit form attained form again, and was resurrected by the remainder of her powerful magic. Upon his resurrection, Medivh briefly went back to Karazhan, where he would see a vision of Khadgar from the past, seeing the apprentice bury his master. He realised his life had not begun, and for the first time in his existence, Medivh was actually himself. 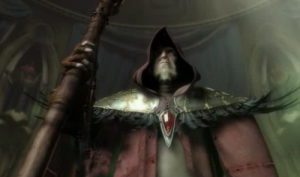 Long after the second war, Medivh returned as a prophet, foretelling the coming of an apocalyptic threat. The current king, Terenas Menathil of Lordaeron and Antonidas of Dalaran both dismissed the prophet’s mumblings as madness.

This was shortly before the king’s son, Arthas entered into his own story. The events of Warcraft 3 foretell the happenings after this point, and eventually after the Battle of Mount Hyjal, Medivh disappeared from the story. There are some theories that he may have met his end on the mortal plane and ascended to other places, or that he is infact lying in wait in the form of a crow, a familiar form he took on throughout history’s events. The latter of these ideas could be enforced by the loading screen for the raid instance in World of Warcraft clearly showing a black crow in the corner of the artwork, and outside the very instance in the sky, a single crow flying around the castle, watching over the land.

Whatever befell the powerful mage, the Last Guardian of Tirisfal may return, especially with the events of the next expansion; Warlord’s of Draenor featuring his very own apprentice as a key lore and quest driven figure throughout.

Perhaps the mysteries of his whereabouts will manifest themselves, but only time will tell.

Hopefully you have enjoyed this article of Medivh, probably one of the best written characters in the Warcraft lore. Stay tuned for more soon, as we explore all the key figures that will be playing into the story of tomorrows WoW!