As this is a new start for World Of Warcraft section of Stratics, I thought it would be suitable to make an article by starting a new character. This is by no means my first character, I have played since Wrath Of The Lich King, yes, I know, Wrathbaby and all that. I have no heirlooms, not even a bow, I’m trying to make the few hours leveling as authentic as possible. So I went to my home realm of Draenor EU, made a new hunter, an Orc hunter, called him Straticshot, cause I’m clever like that, and clicked Enter World.
So there I was, fresh noob from the The School Of Orc Hunters, ready to take on the World Of Warcraft, or at least Durotar for now, with my trusty boar. Will rename him later, until then, he is simply known as Boar. I haven’t started a new character in ages, so I was a bit excited to do this. The Orc starting area is still the same, first quest is to kill my pet’s relatives. Sad, but there is xp to be earned, no time for moral dilemmas. I returned the quest and just as I dinged level 2, I was invited to a guild, level 11 guild and that means I get a few of the perks, lovely perks, 10% xp bonus perks. That is a lot of xp in the long run. I informed my new guild who I am and what I do and that this character is only there for a few hours. It was met with complete silence, which I took as a nod of the head on the other side of the screen. I did all the starting area quests, got lost in the cave like a newbie, didn’t loot the Medallion and had to run back, you know, all the things that a new player might do… or even experienced player who is rusty at leveling.

After 24 minutes played time, I was level 5 and ready to take on the aforementioned Durotar. I went to Senjin Village and picked up the quests there. Met a few players along the way, asked how is their day and got no answers back, for an MMO players, they weren’t that social I must say. Anyway, I was again on my way, this time I was hunting Crawler Mucus, yes, because it is still there and it still takes 10 minutes to get them all. When I was coming back I saw a message in General chat about a level 90 Alliance DK, if you don’t know, Draenor EU is 99.9% Horde, well maybe not that much, but you get the idea. I had to see the 8th wonder of the world and went to take a look. As I got there, he was already dead and about 14 level 90 Horde players were also there, along with 10 level 5-10 newbies. I asked where they sell the tickets, but only got laughter.

As I was continuing my quests after multiple distractions, I finally had a chat with Raider whatshisname and his Dog and they kindly gave me a ride to Razor Hill. Now, I have not been there in a while and when I got there I was amazed by the amount of NPC´s that had landed there. Makes the place feel more alive and gives you a feeling that something is up. Even if you are lowbie! Again I went on my way to glory and fame and as I was killing LT. Palliter in the castle, I had my first answer from a player, two people actually accepted my group invite so we can all get the kill. Small victory in social gameplay.

The rest of the leveling in Razor Hill was rather uneventful, didn’t see many other players and it all started to feel like a grind, just going from quest to quest. But once I hit level 9 and headed towards Orgrimmar, my spirits picked up, mainly because of the Orc and his Cat who walks the road between Orgrimmar and Razor Hill. For the younger players, their names are just names, but for an older gamer like myself who was a kid in the 80´s and a teen in the 90´s Tednug and Scratcfever will always give a laugh.

When I got to the gates of Orgrimmar, I was only one level away from the magical level 10. So I returned the quest I got from Razor Hill and picked up new ones. Anyone who quested in Durotar before Cataclysm will remember the annoying little Goblin and his Orb. I will always do this quest with joy, I will get the orb from his cold, dead hands; well, in this case I will get his cold dead hand that is holding the orb. Grim, yes, but after the many many times the little goblin killed me, I don’t mind at all.

I returned all the quests and got my first green items, items with stats on them, the gloves with +1 intellect won’t do much for me, but it’s green! And I hit the magical level 10!! So I also got to pick my spec and as a non heirloomed hunter, I will put my boar to work and pick Beast Mastery, mind you, even if I had looms I would pick Beast Mastery, the proper way of leveling. 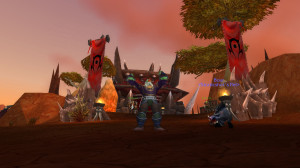