#RACEto20K ~ How to Stay Interested in MoP while Waiting for WoD!

Every expansion around this time, the inevitable happens! No matter what primary focus you have within the game, things start to get a bit stale after nothing new being introduced for weeks, and Mists of Pandaria is not looking to be any different.

With the recent announcement of ANOTHER pvp season, one can only surmise that we have another 3-4 months remaining in this final tier and patch. There is some gray area however, especially now with the 5.4.7 ptr patch notes public and containing information about the 550 ilvl upcoming season’s gear, as well as some other changes.

Regardless of time, it’s only healthy to feel your interest slip, and even for someone like myself – a 25 man heroic guild leader – I find myself looking for something else to occupy my time. While this is perfectly natural, it’s not without a solution… and today we will discuss what I have found to be the best option towards this!

The whole idea started when Syiler, Meoni, and I were talking about plans for WoD. We were wondering just how many new achievements and secondary -interest type things would be added to the game such as pet battle or brawler’s guild. It was at this point that the idea dawned on me! I would use this vast time to add to my achievement points!

Now at first, I didn’t really understand what this meant. I knew there were a lot of people in my guild with 20k Achievement Points, but I suppose I took it for granted when thinking about just what needed to be done. You have to understand, to reach this level; you need to explore every option in the video game. This means PVP, Pet Battles, PVE and Raiding, Leveling, Questing, World Events, professions and many more!

When I realized this, I felt even more enthusiastic about the idea. As a person who has known to put his head down and focus only on 25 man heroic progression, I have never really put much thought into things like questing or archeology. Once I started, I found myself unable to stop; constantly searching through the vast list for another achievement I could do that wouldn’t take insane efforts. 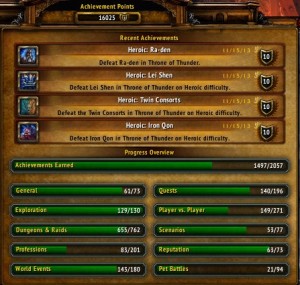 Looks for Areas that you have the least in and start there! Like Pet Battles!

Soon after a full day of pet battling and cooking, the notion was solidified in my mind: “Everyone should try this, it’s the way the game was meant to be played!” Let’s discuss why as well as how doing this can overcome some common misunderstandings about the game.

The first major thing I realized about this is how much this makes you explore the World of Warcraft. I personally have been playing since day 1 back in 2004, and given the expansions have changed the game complete, saw soooo many things I had no idea about. The more you explore the zones and dig around, the more you realize just what high detail has really gone into this game. Even some zones you may have hated years ago, now truly shine. This is very important for players of the game to realize, as there is a sweeping generalization about that WoW’s golden years are behind them. After you just have a fly around the world discovering everything, you may think different!

The second huge revelation that I arrived at was just how many different types of content there is in the game, and especially how little there used to be. You see, Achievements were introduced in 3.0, the patch that ended BC and began Wrath. This seemed trivial at the time for me, but now I realize that the things I found myself doing in the game were exclusively possible because of achievements. This race to 20k does more than just make you put your head down and grind out points; it allows you to experience content you would have never considered interesting before. For example, I have never really been interested in PVP since Classic, and even less now with all the new additions to MoP. However, it will be impossible to get to 20k with doing most of the BG achieves.

Along the way, I get to explore content I have never really tried, and develop intelligent approaches to getting the achievements. Another great example would be archeology or fishing. Most people seem to have a predisposed hatred to these professions, and I can say I was among them until recently. I found fishing to be incredibly peaceful, as it demands you play with ambient sounds on to hear the bobber. I also found archeology to be enriching, and helpful to learn a bit more about the lore and the zones. All of these things are extremely important for a player to understand and experience for themselves, because a lot of people further a misconception that the game is boring or dead. This was never something I subscribed to, but now can refute it even easier knowing what I know. If you are bored by the game, the race to 20k will change this for you! It will get you out in the world doing things you never thought of before, and hopefully reinvigorate your interest in the world.

The final and arguably most important thing I discovered on the starting leg of this marathon was just how much I can do with my characters. Some achievements may be easier to do on a Paladin, while some may be easier to do on a Shaman DPS. Obviously, a lot of them will be best done on your most equipped character, but I was really excited to not only have to do things I wouldn’t normally consider fun, but do them on characters I wouldn’t have used for that purpose otherwise. This goes hand in hand with another fundament revealed here, that I am pushed to develop strategies for not only getting one achievement done, but getting them all done in a timely fashion! When you play the game for as long as I have, you start to grow bored of optimization and facilitation, but now that I have a goal every day, it all feels new and interesting again!

Now, I know a lot of you may be thinking 20k is absurdly far away from your current number, so let’s put it in perspective. I had just fewer than 13000 when I started two weeks ago, and now have 14750. Obviously I will run out of the easy achievements soon and be left with ones that will consume a lot of time, but that is the point after all. It’s best to not look at 20k as the end, but a suggestion. If I only get to 18k when the expansion hits, but had fun along the way, that I still win.

That compliments things nicely, as for a lot of you, 20k may literally not be reachable. You may be playing the game at a casual level, and not even have max professions, let alone enough gear to drudge through old raid achievements.  For those of you in this situation, feel free to set a more realistic goal. The purpose is to have fun and keep you interested in WoW, and I promise you that if you truly enjoy the game for what it is, this will keep your interest. I was skeptical at first and previously had no interest in achievement gathering, but now I realize I was missing a HUGE part of the game!

Hear more about this topic: