Welcome to Metro’s 25 man Heroic Healing guides for the Siege of Orgrimmar! It is important to understand that these guides are
first aimed at helping healers understand their role, and then helping them maximize their play.
Each will feature a general overview of the mechanics that matter to the healers, and conclude with a class-specific discussion. Let’s begin!

A common depiction of the encounter, but very deceiving as a lot of this is avoidable.

First of all, congrats on making this far, especially at a 25 man level. From here on out, the fights becoming incredibly more difficult than the first half and it won’t always be something direct that will result in the wipe. This is important to understand as both a healer, and a raid leader. The quicker you and your raid realize that you are all part of the same team and are working together, the less you’ll hear “this guy is really killing us here.” At some point, every one of you will get targeted by the blade or the fire, and have a bomb hit you. It’s unavoidable, so all you can do is give your best effort and keep your raid’s mind focused on the task.

That goes hand in hand with why this fight is a challenge as a healer, because the only real damage that you will receive from this boss is from mistakes. If your raid were to make zero mistakes, you could EASILY 2 heal the encounter, but as you likely guessed, this is a fight where you pick your poison, choose what mechanics you want, and deal with them the best you can. You will NEVER do it flawlessly; you are just doing things the best you can each time. As healers, it’s your job to help those who make a few too many mistakes recover.

Like a few fights in SoO, your job here is pure support, not necessarily max HPS. There will be two major things that can be done as healers to make the fight ten times easier, so get in this mindset now. I will discuss class specific stuff below, but let’s speak in general about what the fight will bring to the table.

First of all, you should really be considering not bringing as many healers as you can. A lot of guilds I’ve followed 3-4 healed it, but we chose to stick with 5, as we have a really strong core of 5 healers that all deserve the kill, and enough dps to get the job done anyway.

Once you have decided who to have step out, the healers that are in progression need to play a versatile game, and not just stand there and heal. I will walk you through each mechanic that happens and why it demands your full attention, and not just reaction to who is taking damage.

>DPS component – I would impress this as a vital part of the fight for every healer, especially if you are staying near 5-6 healers. The most important part of this would be the very start of the encounter. You will be all stacked up, have bloodlust up, and have virtually no damage going out for a good 30 seconds, so make sure you rail into the boss with everything you have. If there could be a case for prepotting intellect as a healer, this should be it. It could be the difference between a kill or not, especially if you are a priest or monk. A Resto druid with Heart of the Wild could be a good option as well, as it’s going to contribute a LOT more than another other 90 talent on this encounter.

>Crawler Mines– This is as much your job as it is the DPS, and if everyone makes an effort, these will be a non-factor; the less people who contribute, the more difficult the fight becomes. Let’s talk about the variety of options each class has. *NOTE – The Engineering EMP belt affix is op as hell. If you are an engineer, make sure you are using it for this fight! It will stun them on no DR and if multiple people chain it, the bombs will never move! 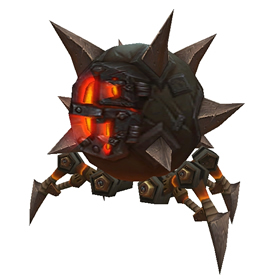 These guys shouldn’t be a huge issue. Use the EMP belt as Eng!

Holy Paladin – Couple a CD with Lights Hammer, and throw it every opportunity. This will triple dip Healing, Damage, and the slow! The slow alone is enough to justify using it, but if you use wings or favor, you can do a really nice amount of DPS as well. Use Fist of Justice to pick off ones that spawn too close to ranged.
Resto Shaman – Cap totem can be projected towards the spawn point for high efficacy, but this is a really bad fight for resto shaman all around. If you can drop a healer, I would recommend it being a Shaman. Earthgrab Totem can also be projected with high efficacy.
Resto Druid – Druids have the best utility in the game for this position, and you can make a case for either Mass Entanglement or Typhoon, but in my mind the decision is already made for Typhoon. It can literally save a wipe, were as mass entanglement’s true strength can only be used immediately. Save Typhoon for those situations where 3+ mines are getting too close, and watch as the group wipes the sweat off their brow. There are plenty of snares and roots to go around, but not many knockbacks! On top of this, Ursol’s Vortex can work as well if used properly. Get in the habit of using both!
Holy/Disp Priest – Void tendrils are the way forward, without question. This, on top of the actual DPS you can dish out with your 90 talent that will double dip makes priest a great option for this encounter.
Misty Monk – We do not currently have one on our progression team for this encounter, but can imagine leg sweep and the aoe double dip they can do would be quite effective. If you have anything you’d like to add here feel free to let me know.

>Electrostatic Charge Stacks and Protective Frenzy– The most important part of this encounter will be helping the tanks do their job successfully. This is particularly of note as they literally cannot survive some of the later stacks without real aid. The options you have are Pain Suppression -> Guardian Spirit > Hand of Sacrifice -> Ironbark -> Life Cocoon -> Spirit Link, in that order. You will want some type of focus on the tank after each stack is being cast, but it’s up to you when you need to start using externals. We begin around the 5th stack, and each tank receives a maximum of 7 stacks. For the 7th, we always use either Pain Suppression or GS, Depending on your strategy, the tank may often be far out of range of the group, so be ready for this. It happens all the time during our attempts, at least once an encounter, depending on some luck factor, but if you have beacons on the Tank you should be alright.

Another factor in this encounter is the attack speed increase the boss gets whenever the shredder is killed. Because of this, I would really recommend keeping one healer permanently affixed to the tank’s health pool. Both will be taking immense damage, and since the rest of the healing is random lot, it’s not a bad idea to send most globals at a tank instead of padding your aoe.

>Helping the Belt Team – As the belt team is the most difficult job to consistently pull off, I am hoping you have your 5-10 best players handling it. Hopefully, they are smart enough to use their personals when needed, and use self-heals and healthstones as much as possible. However, even if they are doing so, there is a pretty solid need for them to receive some sort of healing. Because of this fact, we send our Resto Druid over once every two belts to give them a full round of hots as they board. This is especially useful as we have 3 players that can repeat the process without worry, being 2 hunters and a windwalker monk. Giving them a buffer allowing them to say near full health helps them focus on their dodging and DPS, and makes the job a lot less stressful. I would recommend either a Resto Druid or Priest to be in charge of this, especially if they are Holy. Lightwell can be clicked as well for times when no healer is present.

>The Remainder – Past the previous topics, that’s all there really is to do on the encounter. Depending on what strategy you employ will dictate whether or not you need to worry about each mechanic so I can’t give specific details. The only other thing I can warn you about is the Magnetic Crush phase, as it will be the most healing intensive. Its 55k physical damage every second, so Devo is all but useless on this fight, but the more intense element here is that the other mechanics will likely be picking people off throughout. It’s important to use your classes’ big through put CD here, otherwise you can sit on it until a bunch of bombs go off if you have enough healing going around. Just by wary, as towards the end of the kill, the dps will begin to panic a bit, and let a few mechanics slip through their hands. Patch up the holes, and congrats on the kill!

Don’t be intimidated! Its tough, but nothing compared to Thok for a Healer!

Unfortunately, one of the more disappointing fights as a healer, despite how amazing the fight is overall. Expect to 4-5 heal, and volunteer to sit if you are a Resto Shaman or are under-performing in general, especially if fights with a lot of movement screw with you. Always keep an eye on the tanks, it’s very possible to have them get 1-shot, even by the 4th or 5th stack. Refer to the ways your class can help the raid with the mines, and do as much DPS as you can at the start – normally the class section is at the end, but I included it in the body instead!