Another of the many quality of life changes coming with Warlords of Draenor is supplement to the questing UI as well as general improvement to questing as a form of leveling! At Blizzcon we learned about the new bonus options, as well as world objectives appearing sporadically that many players could participate in. After quite some many months, it appears that not only these changes have made it in, but alongside them is a list of UI featurettes that should add some really nice elements to what is commonly considered a grind.

Once again, we will check out all that is available to us, via imagery provided courtesy of MMO Champion.

It will be my honored privilege to walk you through what you see, as well as layer on my opinions about this system and give my regards towards its future. 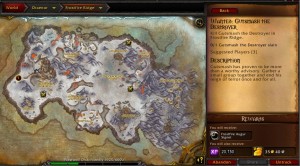 There is a lot happening in this first image, as well as a lot of differences from what we expect to see, so let’s take it slow.

First of all, this is labeled as “Map and Quest Log.” So does this mean that there is only one button for either? What about when we have completed all quests in the zone, or if we currently have none to pick up? These are all questions that immediately race through my mind when I see this.

The next thing that my eye is drawn to is the actual quest text and rewards. Literally, it appears as if they two have been photoshopped together. It is an exact merger to the finest point, even including the exact XP with a new icon for that. I love this concept, because it means that you will be able to immediately see how much EXP and gold you will gain after a chain of quests. But this raises another question in my mind, being what happens when you have multiple quests?

Another supremely interesting thing to note about this image is the small icons on the map itself. If you can’t see this, take a moment to open the image in full screen. While I can’t confirm exactly what this appears to be, I would image it is the zone events that can be completed by players that are lucky enough to be around them when they happen. This is a common feature of many other games, and how it typically works is in the form of a large event that many people rush towards to take down. There will undoubtedly be a good amount of EXP from this, and maybe even a gold or gear reward as regular questing would entail. If typical, it will also be superfluous to the zone’s experience flow and lore. They will simply be isolated events that make sense, but in no way impact your ability to level linearly or follow the story. A great addition overall.

The final thing I see there is the Reputation bar at the bottom. This insinuates that each rep associated with a zone will be featured there, but of course its almost never this simple. The starting zones have historically had their own rep, dating as far back to Thrallmar, but what about other zones? Will this be a feature of many, or just one. Only time will tell, yet again!

Regardless, I really love this new map mode. Its great to not only see the quest and objective markers, but also see the quest text and rewards. Looking forward to seeing what this does to old zones as well as the max level content.

This next image answers as few of my previous questions. This is clearly an image of what will happen when you appear in a zone with no quests complete and none picked up. Besides just the quest progress, it even appears to display the achievement associated with the zone, which of course goes hand in hand with the progress itself.

This does two things.
First, it helps you know EXACTLY where you left off. No more having to ride around or even google quests in the zone to know if you have completed them or not! What a great addition!
The second thing is it helps you track an achievement that you otherwise may not have interest in or even know exists. There are a lot of quest achievements like this in the game, so if this gets backwards implemented it can dramatically help with those looking to complete Loremaster. As stated previously, not knowing where you left off is a HUGE drawback of such an expansive achievement.

On top of this, it may also help you distinguish “story” quests from filler or those events. This is just speculation, but it does seems logical.

It should be obvious to gauge my opinion on this one, but if not let me state it clearly. Amazing change. This has been needed since Wrath. My first article was on how much the questing in this game has developed, and this is another piece to that argument. Can’t wait to see it at its completion!

This appears to be the on-screen tracker that has changed a lot over the years as well. In the early days, this didn’t even exist, and was only functionalized via a variety of Addons. Having this as a feature added with 2.0 really changed the questing scene, and this 6.0 additions furthers the trail blazing.

There are a variety of icons, likely dependent on type of quest, but a bit confusing regardless. Based on what we know now, the circular icon typically is associated with just your run of the mill quest, and the number inside it denotes the order in which you should complete them. The question mark symbolizes that it is already complete, and in the current order, should be turned in after you complete the first quest.

But then we get the new icon! Perhaps this is representative of the world events, or maybe this is part of a new system to organize story v non story quests? I can’t be sure, unfortunately, but it certainly is fun to ponder. Regardless, it looks much more regal and beckons attention.

Even more so does the new header! The text of “Quests” is commanding, but the fact that there is a cogwheel present indicates you can adjust the settings surrounding it. It scatters the imagination!

The final look we have this evening is on what appears to be a different machination of the previous. Perhaps answering my previous question, it is logical to believe that the new icon for quests may indeed be the new type of quest. We also see the Bonus Objective feature that likely increases the reward!

I would have a guess in saying that when you enter the area, this bonus objective pops up and lets you know what you can do if you choose. Perhaps there is more than meets the eye with this feature, but all we have to go on is what we see.

No matter the outcome, everything appears much nicer and much more compact. This is extremely important and honestly quite the innovation for a game this age. To think back when doing a quest meant staring at every NPC just to see if they had one for you, and then compare it with these images…

Breath taking, truly!
I for one, can not wait to get my hands on some Warlords of Draenor!
Stay tuned for more!