As the last remnants of the Alpha Quality of Life changes continue to trickle in, we examine quite arguably the most definitive. Bank space and void storage room has been a huge issue, and while there are many solutions, I agree with Blizzard’s stance and accept this as a suitable response.

Many people wanted the Diablo style transmog, and of course, that would be ideal. It seems to make sense, especially in a game with so many items, but the one point I have against it is that the game has always been around collecting gear, not just seeing it. There are a lot of pieces that I am glad I still have, knowing that if the model in quest were implemented, I would have vendored them years ago.

Of course, I could simply hang on to them for posterity sake, as we did before Transmog, but this is a conversation for another day.

Let’s one again examine a few images courtesy of MMO Champion and discuss what we see and why it will effect the game in a way worth talking about! 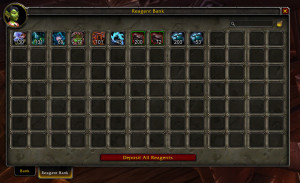 Now while its easy to sum up the changes, it may not be so easy to understand why they are so prolific. Immediately, this should catch your attention as a HUGE bag-type storage that has a ton of slots available. What you are looking at is a separate tab of the current bank, likely unrelated to the previous and free of charge, that will act as “reagent” storage only.

But there is more than meets the eye to this image!

On top of simply giving us a billion slots of storage for this type of thing, it also ushers in an even more important quality of life change, being that stacks now can reach 200, instead of 20! This ten fold increase is enough to make me jump for joy, and likely will elicit the same response from any other person in charge of organizing their guild bank. This alone will allow herb storage to sky rocket, as our current herb tab is always overstocked early, and understocked late.

It gets so bad in the beginning of the expansion, when everyone is playing all day every day, that we would sell the excess because we simply had no room. Now, this would be ludicrous, as having that much room PLUS stacks of 200 means we have essentially been given infinite space to work around.

Besides all this, another thing that jumps off the page to me, but may not be obvious to you is that there are bandages in that tab as well. Of course, it may not actually be bandages, it may simply be some new reagent for something I have yet to understand, but if it is bandages…

Well would you typically consider bandages a reagent? I wouldn’t. I would consider them the output of reagents, ie craftables.

Other things I would consider as craftables would include Pots, Flasks, Enchants, cut gems. The list can continue, if needed.

So, if you are following my train of logic here, would we agree that it would also be possible for flasks to stack to 200, as well as be stored in this? Same goes with potions?

Now THAT is interesting news as well. Having stacks of 200 potions saves a TON of space as well for us, especially in the early goings.

Either way, this is such a great change that its sad people wont recognize it past the damning label “Quality of Life.” This is a real part of the expansion for me, and I am looking forward to it as much as anything else.

The other topic we are discussing here is Void Storage and its future with transmog. In the image, we see that there is now an entirely new tab, the exact same size as the previous. Its very likely all the charges of prior will apply to this one as well, but either way this has been something people have been begging for.

I know quite a few people who have had theirs filled for a long time now, and in honesty, its on Blizzard to remedy this. The whole concept boils down to keeping everything even remotely interesting just in case some day you wish to use it to transmog to or perhaps use as novelty. If the storage is limited, then the system is flawed.

In my opinion, I see no reason this needs to stop at 1 tab. What function is that? Are they actively saying they are happy to give us another tab for this expansion, but its your fault if you run out of room again now?

What’s the point behind gating it, especially now that you proved interest in expanding it?

Back to the previous conversation about transmog, do we think this system does the job? As mentioned, I think it does, because I like seeing items that I have saved, but in an ideal world, its utterly flawed start to finish.

The fact that you even have to save the items to be able to transmog to them makes little sense to me, especially after seeing other title’s approach to the system, but coupled with them being each a single slot in a box now smaller than the reagent tab of your bank…

You know its bad when people are deleting the challenge mode gear sets after transmogging to them to avoid having to use up another 9 slots in the void storage!

Anyway, I believe this is everything that falls under the quality of life changes seen in this first Alpha build. As a recap, I’ll include the other articles so you can see any you may have missed.

I am really looking forward to all these changes, as well as the Toybox, which is in, but not quite working as well as it should be yet. That will be a target of my interest for sure.

So stay tuned, as this will likely be a whirlwind test cycle, and I imagine by the end of this week, there will be another 10 topics to discuss!

Darker Nights in WoD – Why You Will be Disappointed