A Guide to Muting 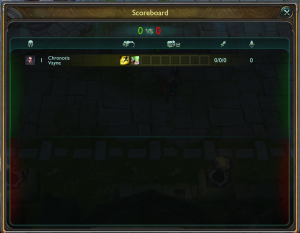 The League of Legends community is known for being pretty horrific.  Personally, I’ve seen a fair amount of flame in my time, and a bit too much of it was the sort that makes you understand why some serial killers end up snapping.  As a player attempting to climb the ranked ladder, and doing it pretty badly (Imagine someone with four broken limbs trying to climb an actual ladder), I found myself using the mute feature more and more to stop my brain being melted by that special type of thirteen year old on the internet.   I thought I should share the method I use so that other people can avoid the same fate.  Or people could just stop deriving pleasure from making other people feel bad (but that’s not going to happen).

If you’re lucky (or unlucky, depends on how you look at it), you’ll be able to spot people you need to mute in Champion Select.  Here are some things that should raise warning flags if you see them in chat.

Nine times out of ten, the person that says this will complain for the whole game about the fact that a specific champion wasn’t banned, and that a specific Champion that they don’t like should have been banned instead.  Warning signs increase after someone on the other team picks a Champion and the response is “omg Fiora gg”.  If you are first pick and did the banning, mute this person as soon as you get in game.  If you were not first pick, it is worth waiting until they start moaning to mute.

Mute this person as soon as you get into game.  Even if they are smurfing, all you will hear is how bad you are compared to players in the ‘real’ divisions.  Muting them immediately will also help you restrain yourself from smugly typing “Challenger strats” every time they (inevitably) die horribly in a stupid situation.

Because of Murphy’s Law, if you steal someone’s preferred position, you will feed.  Or at least die once.  As soon as you die (or, heaven forbid, give away first blood), you will be the subject of many smarmy remarks from the player you stole from.  Even though you didn’t really steal and that’s just how draft works.

“Last game of my promos”

Be prepared to mute this player as soon as the game starts going downhill.  It can be nice, if you win the game, to see the “goodbye Silver!” as they are promoted to the division you can say aloud without following it with “but I just got placed there, I don’t really play ranked”, because it serves to remind you that you are not going to be trapped in the maelstrom of death that you’re currently stuck in forever.  However, should you lose the game, you will probably be subject to abuse from that player because you didn’t read their mind and Flash Ult EQWQE while dodging three different skill shots when they went in.  You know, because why wouldn’t you do that?

Ideally, you want to mute a player before any flame starts.  If players have passed the Champion Select stage without raising any warning flags, it takes a lot of skill to pre-emptively mute them.  It’s always better to be safe than sorry.

If you give up First Blood

First Blood isn’t a huge factor in swaying the game anymore, but it’s never nice to have a special announcement made when you give it up.  First Blood produces less and less flame nowadays, but if you’re having a bad day and won’t be able to put up with any sort of teasing, it’s better just to go 4 man mute and play the game in peace.

If you are the Jungler

I have to be in a very specific mood to play Jungle.  It’s not my strongest role.  One of the reasons I avoid it like the plague in Ranked is not because I don’t play it very well (I don’t play anything very well), but because everything is the Jungler’s fault.  Everything.  If you find yourself in the Jungle in ranked, be prepared to mute.  In my experience, bot lane is the most likely to object to your existence because bot is generally considered hardest to gank.  Because you don’t have time to explain people who don’t understand that ganking them will just make them gold efficient to the enemy team again and your best bet is to snowball the other lanes, muting is a better solution.  Top lane shouldn’t give you too much trouble; it tends to be a quiet farm game up there.  The Mid laner might start mouthing off if you don’t give them “their” Blue Buff, but just mute them when you take the second one.

One death can be shrugged off with a “lol”.  Two is understandable- ganks happen.  Once you hit three deaths though, people start to get annoyed.  Either the person who is constantly dying will start blaming people for not calling ‘missing’ (Even when they pinged twice to say enemy missing, once to say fall back, the laner walked over their river ward and they didn’t even get an assist on the kill), or another member of the team will get annoyed and start moaning about them.  In either case, it’s not worth listening to.  Mute away.

If you’re having a bad day

This one is slightly more abstract, but definitely worth a mention.  When you’re stressed out, uptight, haven’t slept in days, hungry, have a headache or any number of things that might make you more irritable than usual, mute people.  It really isn’t worth it not to.  Not only will you spare yourself getting wound up by any potential flame, but it will also prevent you from ‘rage reporting’ at the end of the game, for something really not justifiable as a reportable offense, but because you were in a mood really got to you. 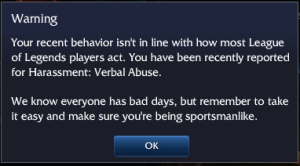 All Chat is an interesting thing.  I’ve interacted with some very nice people over All Chat before, but for every nice person, there are a thousand more who will mock, flame, or just annoy me.  I play with All Chat on, and if you take that risk too you have to worry about muting another five people, potentially.

The best time to turn all chat off is when you’ve muted your entire team.  Once muted, you will quickly forget that people are/have been flaming you, and continue with the game.  However, there is nothing more annoying than seeing “For?” appear in red in All Chat.  You’ll only be seeing one side of a conversation, but it will basically be the same thing as if you were reading the in-depth analysis your team has been making of your not-even-that-bad plays.  What’s worse is seeing, a few moments later, “Okay”, because then you know you’re coming out of that game with upwards of five reports.  This is when I turn All Chat off.

I mute the enemy team, or members of it, when they are openly flaming, or when they are just being annoying.  The odd “Not even close” is fine, even slightly amusing- they don’t really mean it, but having the enemy Teemo constantly send “Nope” every time you trade with him will, it has been scientifically proven, cause you to rip out your own eyes.  Mute before that happens.

Mute your team if you are playing Teemo or Urgot.  People don’t tend to like that.