One of the final expected actions on each Expansion’s promotion list are the developer interviews and questions and answers segments. In expansions past, fans and news sources like our self thrive of these questionnaires, as we are able to ask hard hitting questions about topics that may not be already in the mix…

Well, that was not the case this year. I’m not going to solely blame twitter, but the fact that its so accessible by so many different types of players, we got a LOT of wasted space in the question’s answered. Which is unfortunate, and not to say I had 100 questions that were better asked, but it still is a real shame to see such an important even squandered by such useless and paltry questions such as if Magtheridan will make an appearance…

There are a handful of semi-interesting talking points, so let’s go over them briefly and discuss the implications!

– No long grinds associated with the Legendary Ring this time

I already gave my thoughts on the Legendary situation this expansion, and will stick to them. Frankly, no long grind tells me that everyone can get this either before raiding even opens (which would be retarded) or not to long into progression. I understand they are trying to make expansions shorter and more compact, but some of the things they cut just really adversely effect the game in my eyes. I’m not a nostalgia fanboy, but the item is called a Legendary for a reason. Sure, a 0.01 percent drop on the bindings isn’t more interesting, but surely the original model of Legendary items can teach of something right?

My biggest complaint with the cloak was that everyone had it and it really effected progression. Now the idea looms that it will happen again. Blizzard are no longer learning from their mistakes, which is worrying to me. Oh well, its just an item. Let us move on! 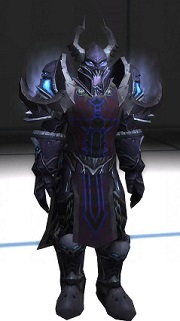 Cstocks says something along the lines of “The first iteration was too big, and didn’t feel fun.” I immediately disagree with that, but when we learn that a smaller garrison may mean more custom stuff it sways my mind back the other way.

To me, the larger scale the cooler the thing is in this game. Time, money, effort – which ever. The more it takes and the bigger in scope, the more impressive it is. That’s the fundamental part of an MMO!

But, if a smaller scope leads to a larger scope in customization, then I am all for it. Hearing that Death Knights who are exalted with the Ebon Blade can recruit Death Knight body guards is an amazing touch, and considering no on has heard of this before, it makes me believe that its either extremely out of the way (or maybe its not in yet lol.)

This gives me hope for other class specific entires, like perhaps Paladin’s exalted with Argent Dawn or whatever they are now can have something. Mages with Kirin Tor? Monks with Lorewalkers? Druids with the Shendralar? jk.

Either way, if they build on it, I am sold.

– 5.1 style story quests through your garrison.

This was probably the biggest reveal in the entire interview. Obviously not having payed attention religiously to the Garrison quests and their appearance, I would never have known this on my own. It was said in the interview that the first 8 or so weeks are just building up your pressence within your own garrison and this world, but then the 8 weeks after that are intense story-driven assignments. In total, these 16 weeks must equate to something big, because if the Dominance offensive line was anything to keep your eye on, they have big shoes to fill.

Not sure what we may be seeing, but I am looking forward to the story this time around. Frankly, MoP’s daily concept with 5.0 and even 5.1 was extremely off putting. Hopefully, this “weekly” quest isn’t something that needs to be done over the course of the week. What I mean by that is, hopefully it can be done in a single day and doesn’t require constant repetition. If it does, I simply won’t participate, as excited as I am for the story. There simply aren’t enough hours in the day to do story stuff and get prepared for raiding.

– Profession buildings: Don’t have = craft basics, Do have = accelerate CD and make best for you.

The final topic to discuss here is the most poignant, and not because of the interview or the answers given. Frankly, I had no idea this was an issue, but after watching this live as it happened and then checking out the forums, apparently professions are in some was a “train wreck!” Who knew!
You see, on my main that I leveled 90-100, the profession building must not be doing its full job or something. Either way, or I don’t have the tier three blueprint where others do, but they claim is that profession owners simply don’t make anything themselves anymore. They option, according to these individuals, is that you can either have the JC folks make you a 650 ring in the time it takes to complete the work order, or you can spend the 10 days getting the CDs to make it yourself.

This sounds like an over dramatic look on something that likely is a bit different then expected, but assuming for the sake of this conversation that is the case, does it really matter?
Why would it, other then you can get good gear quicker into the expansion. You can STILL only have 3 crafted pieces, so if you don’t have those by the time raiding opens you don’t deserve to have your voice heard. It makes no difference for actual gear progression, as by the time it matters its equated anyway.

The one thing I will agree with is that 5 man heroics are just going to be trivialized YET AGAIN by these silly changes. Oh well, at least CM will be something to explore.

That’s everything from me and this recap, so if you guys have any questions about anything discussed here, or potentially omitted material please feel free to ask! Otherwise, see you in WoD!