Let’s start with an apology in advance. Before you say anything, yes I realize this will be the fourth article I have made using “timewalker” as a descriptor, and yes I realize that this may not even be the name of these events. I just don’t know what to call them otherwise! At least not yet, as it is so early in the Alpha. I imagine we will all know sooner or later though.

In MoP we began seeing alternative things to do while questing, including the “treasures of Pandaria” and random items on the ground that you could loot to gain exp and gold. These made MoP feel like a living, breathing world, with a lot of interactions to be had.

It was pretty basic, but I can say with confidence it was the foundation for what we are examining today. And there is far more than just this!

While questing in WoD, you will find many alternatives to simply killing mobs for a quest or looting items off a ground. There are many rare creatures to be killed, world events to be completed, random chests and boxes to dig into, and apparently these time loop events that place us in a situation between both worlds.

It appears that when we enter, we blur the line between our time and theirs, and for some reason, everything is stopped. It reminds me of Prince of Persia, and you’ll see why if you take a moment to check out the video.

There appear to be various “objectives” to these, that are indeed character specific one time loots.

As you enter, you may see lights that help boost your speed, and may serve as an additional source later in development. Seemingly, the main goal is to loot all the NPCs that are present, and make it to the end for a more substantial reward.

For the initial testing I did on these events, I found the Ogres present to all carry the exact same loot each time I went through it on subsequent characters. There were four total.

The first gave a vendor grey that sold for 4~ gold.
The second, falling from the roof, gave nearly 10 gold straight
The third, tumbling down a rafter, gave a few gold as well as a vendor trash item that sells for 5 gold.
And the final gave a Rare Quality neckpiece that was the same each time it was looted. The item was an intellect piece that had higher item level than quest rewards from basic quests in the zone.

Here are some stills from the video that may pique your interest even further: 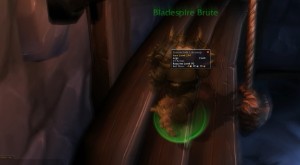 As an event, I say personally that these are nothing short of spectacular. I love the concept of keeping the world big and giving options to explore and find things you wouldn’t expect. The current zone we are testing is an amazing example of this, and I can’t say anything but good things when discussing it. They have really done a spectacular job with making the starting zone feel huge and expansive.

Looking further into these events though, what do we think?
At first, I thought they were separate groups of ogres trying to fight the one at the top, but this does not appear to be the case. Looking even closer at the second displayed image, we see that even the Ogre at the top is cowering, and there are fireballs reigning down all around him.

What could this mean? If this is truly a bridge between the worlds, perhaps its a peek into the future? Perhaps, when the future unfolds, this is Guldan’s doing, and the fire reigning down is the destruction of Draenor?

Only “time” will tell, both figuratively and literally in this case.

Hopefully Blizzard will officially label these events so we can speculate even further, and hopefully they are indeed meant to be references to futures that come and go, or may not happen at all.
I can’t shake the feeling that we have a LOT more to do here than simply play a role back in time. I imagine, as we find more and more of these events, it will become obvious that we are viewing a world that will escape certain peril, and it may end up to be because of our work!

Stay tuned for more Alpha coverage and feel free to check out the video below. It details the extent of the event!