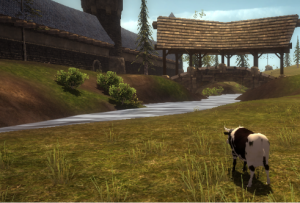 I was very excited to be a part of the first Serbulian Town Hall. Several of our interested players had very good ideas that I hope will be discussed in more detail. Eric and Aaron were both in attendance as well, and this did much to excite the player base. These developers are deeply interested in what we would like to see happen in Project Gorgon.

Unfortunately, I had to leave early so I could not offer my own suggestions, so I will do so here.

The first thing I would propose is a Video Contest! Recording game videos have become very easy to do, and there are some easy and sometimes free video editing programs out there, that makes this a contest that virtually anyone can do it! Already we have a variety of player types and playstyles and I for one would love to see that first hand. Use whatever form of creativity that drives you and have some fun!

There would be prizes of course, but I do not know what kind of prizes would be good. Are longing for some special piece of equipment? Or perhaps a hefty stack of cotton. What about higher end dyes? Let me know!

My second idea has to do with guilds.

I know we have no mechanics for guilds at this time. But I am thinking more in terms of involvement and organization for the purpose of community building. Also, we can start to see how we want guilds to be in this game, and trust me, the developers are listening to us.

I am not going to tell you how to do this, but since we are in Alpha, don’t just be thinking in terms of gathering a group of like minded folk to run with. Yes, it can be that too. But think about this: rather than creating a hunting guild, why not create a guild who’s purpose is to organize PUGs on a regular basis, perhaps one afternoon a week. Or perhaps that while hunting together, will make themselves available to help new people as they trickle in.

Most of you know that PG’s forums are located at Stratics. We also have a whole section devoted to providing forums for individual guilds. I have never used them, but they are there, waiting to be tried out.

So give it some thought. What temporary organization may help build some community for when Kickstarter arrives? Grouping? Newb Help? Trade Skills? Role Playing Events? Its just us, guys. What we would like to see is more likely to happen if we make it happen!