Graphics and visual fidelity are a known sticking point for me, but I wont say I predicted or called this. No, there is no reason to be this smug or proud. What I will say, however, is that in the later years of Blizzard’s development, I find myself placing more and more trust in their work and getting more and more rewards. Some may say the point of this article can be summed up in that sentence, and they may indeed be correct. Regardless, follow me on an extended trip, continuing from where we left off in the previous article. I have a feeling you will be just as excited as I am! 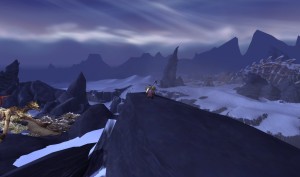 Its times like these I wish I had an even wider monitor! As mentioned last time, I said how important picturesque and panoramic scenery was to me, and they did not fail to deliver early. There is no question that they are a lot more interested in scenery and fidelity than they were in Wrath and below, but now with the zones being so much more expansive, as well as the prospect of no flying through out the expansion, you can see they really went all in.

Here we see another breathtaking view of a main Horde Quest hub. As if the gameplay surrounding it wasn’t enough, the titanic fortress is protected on all sides by sheer cliff faces, and has one incredible bridge that leads you to your destination. You will be utterly speechless as you approach, mostly because of the magnitude of the fixture. It is so much larger than the player that being able to fly around it would be so disproportionate. I wasn’t necessarily against flying in WoW prior, but after seeing this map and this location specifically, I hope it never comes back. Seeing these things from the ground is so much more poignant when you realize the scale you are a part of.

The next thing to examine is one that can NOT be overlooked. Aside from the typical scenery and landscape changes you expect each expansion, this is likely one of the most underrated points of an expansion, topped only by revamped questing with Cataclysm. New character models change everything. This is not an exaggeration. At first, I wasn’t sure how I was going to feel about playing with a model that potentially may not look like my original character, and although I haven’t been able to test Blood Elf yet, I can say with 99 percent certainty that there is absolutely nothing to fear. The fact that everyone is running around with improved models AND animations is part 1 out of two parts as to why I feel like its an entirely new video game.

I can talk about it all day really, but you will need to see it for yourself before your mind is set. I ask only that you realize there may end up being a few slight changes, and that you don’t get hooked up on minor details. The world is so large now, and the players look so spectacular that I would be satisfied with an entirely different character if it meant this coming to fruition. You can also turn them off, if for some reason you are that concerned!

Regardless, its not just the players that make the world sing. Essentially every Orc in Draenor has a brand new model as well, including old favorites and main characters like Thrall. I won’t weigh in on if Thrall’s new look suits him quite yet, but its irrelevant. He looks so good in the new landscape alongside the brown skin orcs that there is nothing to discuss. When this is all said and done, it will be such a crazy comparison between even just MoP and WoD, let alone WoD and Classic! Couldn’t be more excited!

Look carefully, as this one is part two of why I feel like Warlords of Draenor is an entirely different video game. This screenshot is a culmination of everything we have spoken on previously, with one big addition. The selection glow! There are a number of different colors and functions for each, but the point is that this, alongside entirely new models and a gorgeous new landscape really solidifies my love for this expansion early. There is something about the bevy of things we have discussed here that really resonate to me and make me proclaim my stance on this game’s Renaissance.

Even players that have been playing as long as I have seem to agree with my initial impression. The first thing I said when I was finally able to log on to the Alpha was “I seriously feel like I am playing an entirely different game.” This was meant with overwhelming confirmation, even from players I would never expect to be impressed by this sort of thing.

When a few graphical changes make the game feel this different, its pretty obvious where we have been as players in the past. It wasn’t always the most beautiful game, but between MoP and WoD they have easily tripled their fidelity, if not more.

I have never been so impressed with a progression of changes as I have so far, and even though I was excited by MoP’s content features, I think I am even more excited about WoD’s behind the scenes changes that seemingly do even more! It is truly becoming complete now .

I’ll leave you with one last change to cap the whole discussion off and hopefully win over any purists that still don’t agree with me. Watch the short video and you will see grass react as you step in it. Keep in mind, this is only in Jade Forest as well. That should speak volumes of their dedication, when you realize that they have implemented nearly all of these graphical changes across the board, not just for new content. I for one, can not wait to see some thick fields of grass get parted by my characters, and just know that if it looks like it does last expansion, it will be so amazing in content its designed around.

I’m not one to express my giddiness very openly, but that is pretty much the only word for it currently. Its been a privilege and an honor to be able to test this expansion this early, and all I can say is amazing things about it.
Can’t wait to see the raids! Can you imagine!?