Hellscream by Bobby Brooks – A Recap and Review

Before anything happens here today, you need to understand two things.

1. This article WILL spoil the story for you.
2. The Short Story Hellscream is FREE. Go read it first here.

The final released chapter of the tale of Garrosh is the one we have all been waiting for. The entire puzzle created by Warcrimes – where we see Garrosh released from his captors selfishly – finally comes to a close. It is the prelude to the comic The Stranger, for many reasons, and Hellscream certainly sets the stage for the passionate display Grommash gives in the cinematic. Truly, what we have been gifted is the key to Draenor’s main lore and now that it is firmly in my hands I couldn’t be more pleased.

We pick up the tale of the estranged Garry Hellscream in Nagrand along a different time-way. Kairozdormu, his defender and eventual savior in Pandaria, is not far behind and the tension immediately starts to mount. They bicker about how either will server each other’s purpose and in the end the familiar Hellscream comes out again, attacking Kairoz. Its frankly good to see Garrosh back in his native environment, especially his underestimation of how powerful even a mortal Bronze Dragon can be. Kairoz gets the better of him by using the remainder of the artifact they used to travel back to Nagrand with as a loop, and ends up with Garrosh in chains.

Its at this point that Kairoz reveals they are indeed part of a Multiverse, and that this world is “back in time” but it is not a linear path. He warns Garrosh that things will be slightly different here, but assures him that its the perfect avenue for their plan. Kairozdormu, in is infinite wisdom, forces the submitted Hellscream to hold the shard of the artifact that once remains, and explains in create detail exactly how they will take over this world. How they will use this Horde and then travel to other planes to cultivate more and more armies.

Well Garrosh wasn’t happy about this. The first major twist (and contrivance in my eyes) comes with a second, more spirited attack by Garrosh, ending the now mortal Kairoz’s life with the shard of the artifact he was mean to lug around.

The second act in this gruesome play is for Garrosh to go face to face with Grommash and convince him that he can assist him. It happens exactly as you would expect, which I am a bit disappointed with, but frankly its written beautifully. Garrosh goes 1v4 orcmode, and wins, which REALLY helps establish just how strong Garrosh really was. I mean it has to be this way doesn’t it? I feel Garrosh is still the strongest creature on Draenor, even knowing Grom will end up as the final encounter of this expansion. Regardless, he gains his attention with his power, and then impresses his with his knowledge.

The face to face discussion between the two is bittersweet at first, and leads Grom to have painful memories of his wife. Garrosh, known only as the Stranger to the Warsong clan, asks about his apparent mother, and Grom bats the question away time and time again. Eventually, Garrosh realizes a key difference in this time way is that he himself was never born, and Grom was never a father. This has changed Grom as we know him, and leaves a lasting resentment in the death and culmination of his wife and clan’s fortune. 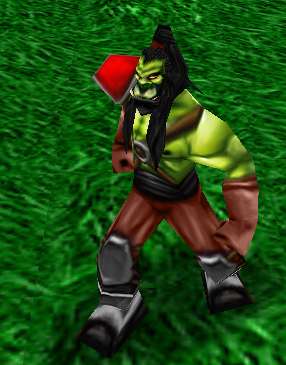 Regardless, Garrosh presses on discussing how important the Iron Star technology can be, and doesn’t shy away from using the artifact as his trump card. He assures Grom that if he doesn’t listen to him and see what could become of his people, then they will all be doomed and both Hellscream’s efforts would become futile. From this, we already know the outcome given the Cinematic, but it does a great job building up the event even more.

2x Hellscream travel to the Ring of Elements and bring their timey wimey shard with them. Garrosh emplores Grom to see for himself, and he does. This is where things start to really pick up, especially in quality of description and passion with which things are laid out. It becomes painfully obvious to the shaman tending the area that the visions Grom is witnessing are extremely painful and a train of protests come raining out of everyone involved.

For the record, Grom sees everything. He sees the Demon’s Blood at the Throne of Kil’jaeden, he feels the blood haze and the power it grants him. He sees the might of a united Horde but feels the Burning Legion’s influence when they dispatch their enemies and force them to become their army of grunts. Eventually, he even sees Thrall and the progression of Azeroth after the Horde’s failure. At this point. Garrosh realizes this is too far forward, and needs to make sure Grom doesn’t see anything that could compromise his position. He kills the shaman and forces Grom out of the vision without a final question answered.

Grom wants to know how how it ends, specifically how his story concludes. Garrosh can’t admit the truth other then in generalizations because it will effect his status here, but Grom is satisfied to know that the struggle is not worth the sacrifice.

At this point, the cross over between the Cinematic and the Short Story comes to its climax. The most powerful moment of the cinematic for me, is when Grom challenges Gul’dan and learns he must sacrifice “Everything” to become this god of a killing machine. The line, along with Gul’dan’s slow removal of his hood to reveal the green skin and red eyes, quickly became legendary among the social storm of interest. And now, fully realized is the truth of the matter. Not only does that scene have impact knowing what it implicates, but now it becomes even heavier, as Grom knows he must sacrifice everything before even encountering Gul’dan.

It’s so much sweet when Gul’dan responds EXACTLY how Grom expects. It really proves Garrosh’s involvement and solidifies the bond between the two. And frankly, solidifies my love for this story arch and expansion based around it.

My opinion of the short story, as well as the animated comic that takes place some time after this, is 99 percent positive. The one single moment that is a disappointment to me is seeing Kairoz go out so meekly. A optimist would say it proves just how strong Garrosh is, which makes sense, but the fact that a Bronze Dragon who COMPLETELY ruins Pandaria’s sense of accomplishment by helping Garrosh escape, just dies 100 words into a short story is a bit silly. I’ll go so far as to say its a complete cop-out by Blizzard. They clearly didn’t have room for any more characters in this storyline, and considering even Garrosh even loses power, its no surprise.

Regardless, there couldn’t be a smoother transition coming from Pandaria to Draenor. There is no better way to tell the story then in the parts as it was done, especially when you leave the keystone for last.

If, for some reason, you still haven’t read this literature, go do it now.

Start with Warcrimes, then read Hellscream. Read the Stranger next, and finish by watching the Cinematic. Its all picture-perfect and magnificently done.