For those of you who haven’t been following, this has been quite the media storm, which I suppose shouldn’t come as a surprise… Welcome to the WoW community after all. But today, I will take some time to lay out the full argument for both sides and explain my opinion in detail for those looking for it.

In order to follow the series of events, have a look at these links:

@JesseGarrett8 No doubt, we did. Just like every BlizzCon where we talk about early design, things change during development.

OK, so if you have seen all that, you are now caught up. Let’s get right into both sides of the argument and dissect why, as usual, the community is making a much bigger deal over this then they should.

We will start with this, as its important to understand why people are upset before you try to make sense of a counter argument.

I’ll begin by listing the most prolific statements PRO I have seen today, and address them in no particular order.

Blizzard made a promise, and they did not keep it. They got us excited, and now take that away from us.
This is a strong opinion, but it doesn’t help the case for me. People saying this are not understanding the more important underlying issues here. Unfortunately, this is a game in development. A stronger argument would NOT consist of conjecture along the lines of “you lied.” They did not. It was just what they planned to do at the time, and now the plan is different. This does not mean you shouldn’t be upset though.

The Temple of Karabor and Bladespire Fortress are epic and iconic. The new locations are generic.
This is a weighty point and one I can partially agree with. To couple it with the previous statement, when we were told about this, everyone was sold because of being able to call these areas a home they deserve. A HUGE part of the expansion is our presence in a previous timeline, and for the first time in 10 years our characters are actually recognized as vital pieces of the puzzle by important lore characters.
Even worse is the fact that Horde and Alliance have no business setting up shop in this world. It really makes no sense, as its simply back in time. If you were to do this in a real world scenario (that allows for time travel) you are creating a recognizable demarcation and adding further conflict to a world that will be confused by our issues. As far as I am aware, we are both here to stop Garrosh. Why are we fighting each other and not assimilating with the story?

The footholds in Ashran, and Ashran in general, make no sense lore-wise. Why would they be there, other than to act as a place for players to experience Ashran content.
As alluded to in the last portion, I agree with this as well. It doesn’t make sense that the cities would be being built on an island in a previous timeline just to have war on each other. We could have done that back in our timeline! But, the same thing could have been said about the Shrines in Pandaria. At the time, there was no reason for those to be there, but they wrote something in to the story. Hopefully, the same happens here.

Karabor and Bladespire are too well made and too important to never be visited after the starting area.
Once again, I agree. It makes no sense to have put this much effort into making the starting areas epic, and then announce a change after all that work is done. However, I severely disagree with the people saying they will be abandoned. This is your own fault, if you feel this strongly. Its not the companies issue that you don’t go to cities you like. If you like them as much as you claim you do then whats stopping you? This point will be further discussed in the counter argument.

I have seen the new cities, and they are pitiful. We went from amazing Bladespire, to this copy/paste horde settlement.
Well no, you haven’t actually seen them. You may have seen a version that is present in public Alpha build #2, and if you did you would also have seen the doors being so small you can barely enter, the stairs that have no collision texture, and the paths that aren’t tiled yet. This is in NO way indicative of what the city will actually look like, but doesn’t change that Bladespire and Karabor are currently amazing. They have a LOT of work to do if they want to make these bases worth looking at.

It wouldn’t be much of a debate if the counter argument was easy to reach for everyone, but I hope those with a working brain will understand the world is not actually ending after reading these points on why this might actually be even better.

First of all, Karabor and Bladespire aren’t going anywhere. They just don’t have Banks and Portals.
This is actually REALLY important to the counter, and it seems a LOT of people have over looked it. First of all, the portals being one place makes it important, there is no refuting this. But what else is important about a city? Trade Chats and the like are the other biggest issue, which can’t be over looked. But otherwise, everything the “hubs” have that Bladespire doesn’t can be made up by your character. Guild and regular banks can now be accessed on the go. So can transmog and repair. There is no reforging, so no need to worry about this. World travel is so easy now with cloaks and CM portals, so this really isn’t such a huge sticking point either.
In fact, I might spend even more time at Bladespire then I have at any other non-major city, because its so close to my Garrison! The next statement ties this together with why this is not a big deal at all.

There will be a quick-access travel option from your garrison to Ashran and the subsequent bases.
Once again, extremely important! If this is true, then you can simply spend all your time in Bladespire, take a taxi to your Garrison (or perhaps use one of the inevitable portals we will eventually receive) and then portal to Ashran every time you need to use the main city’s functionality. Oh, but you will be missing trade chat…

Trade Chat was previously used exclusively for finding groups. This has changed dramatically.
Now, there is an in game group finder that can be used ANYWHERE in the world. It will also have a text field and chat functions. This is essentially Trade Chat on the move, and will allow you to actually find groups without having to constantly spam chat with your needs. Everyone will have it, but even if this magically doesn’t work, there will always be Openraid and OQ. I imagine this feature will trivialize those sites though, unfortunately for them.
So knowing this, whats left that makes the “home base” so important, that you can’t spend all your time out in the world elsewhere, and still get things done? I actually love the idea, and it will help me feel more like I am playing the game, and not just AFK all day in the city.

They are not currently finished. Anything can be added or changed.
Very important, as it is true. What you have seen now should not influence your decision on this matter. The way I am looking at the whole ordeal is that we just haven’t seen the Ashran bases yet. I really regret even making that video, because it allowed thousands of people to have a biased opinion. It was clearly not meant for testing yet, and I broke that code of honor for the sake of fan service. Oddly enough, I may have actually influenced a decision, if something major changes because of this uproar. Feels strange…

They will help players find a feature that they may not otherwise have had interest in.
Honestly, this is enough for me. Lore says this had nothing to do with the decision, but they have done enough lying already to know this is not the truth. The best features in MoP included Challenge Modes, Proving Grounds, and Timeless isle type zones. It was really difficult to get people to actually want to explore and play this content without mandating it.
The same can be said about Ashran, but this time you will be there often enough to eventually want to try it. Its a brilliant play, and will likely do FAR more good then harm. When enough people check out Ashran, they will not care about the city change at all. They will be happy they are close to the massive world PVP meats PVE they have wanted since old AV days.

Long story short, I both love and hate this decision. I really loved the concept of the main city being this huge sprawling castle that we spent a lot of effort building up. I also really love the concept of having instant transmission to Ashran, a feature that is likely to be my favorite addition next to Mythic in the expansion.

Its obvious the previous cities were beautiful, and I will be spending a lot of time there, as I can get there quickly from my garrison, or even use the CM portals to shrine and access Org etc. There are a ton of options, so I don’t feel forced into cities I don’t want to be in. However, I am confident by the VERY early things I have seen from Ashran that this area will be spectacular. I can’t wait to see what it looks like when its actually time to test it. I will wait until then to cast whether the new cities are good enough aesthetically to call home.

Finally, I stand by my statement that being plunged into one of the biggest features the expansion has is very healthy for the game and its players. People are upset now, but provided the new cities are horrible, there are a LOT of things to be excited about, especially since they are tethered to the garrison. Now, everyone will try Ashran, and this will do far more good than harm. Eventually, you won’t even remember this argument. And those that do, should be satisfied enough with the new homes, as well as all the amazing content Ashran has to offer. 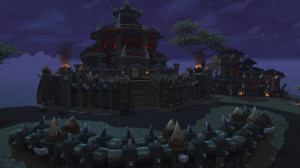