As if a gift from the fates themselves, this Wednesday (Feb 19th 2014,) we received yet another look at the upcoming character model improvements to be brought in with Warlords! The last we saw was the Human Female, and now we see her Horde counterpart, the Orc Female. As per last time, we discussed first the comparisons, but also the implications of the models and what they bring to the game and the more we examine, the more we are hopeful. 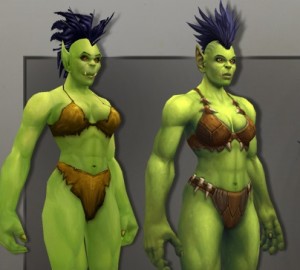 As you can see, there is an immediate difference in the latent facial features, making the Character feel much more alive, and less like an animated being. It is obvious to me that this is a tone they are wishing to replicate across each race; the logical response to critics of the art style claiming it to be “childish.” Other features that stand out are sheer muscle definition. We noticed this when examining the Human Female model, but its even more prevalent in the Orc. The core alone is impressible, but what catches my eye is the neck and arm definition, as well as the legs. The Human Female model had more definition put into the legs than the Orc, but when looking at this model’s upper body you really get the idea that an Orc is a ferocious being, no matter gender. It is mentioned in the article released that they are looking to go beyond the “doe-eyed” female orc and get down to a feeling of a warrior beyond gender. I dare say she looks as much like a warrior as anything I have seen! I’d be scared to run across that Orc!

As is only reasonable, we can look back at the new orc models introduced with Cataclysm via Thrall and Aggra and find these to be an ever larger step up. Many people assumed those models would be the actual ones we received for each respective Orc gender, but now that we see this is not that case, I find it even more impressive.

Take a moment to compare Aggra on the Left to the newest female Orc model and you will instantly notice the facial definition as well as the neck and upper body points we have already discussed.

While the actual stand-still model is impressive, I find even more so the look into the facial expressions. An image of these can be found below. Take note of the emotion put into each, and notice the differences in mouth and eyes with the variety shown. This proves that they are taking the time to not just animate our character models, but truly bring them to life, and make them feel as if they are living, breathing creatures with us as the pilot. This is a clear trend in the previews we have seen thus-far, and I can NOT be happier with the improvement. Despite literally never being zoomed in far enough to notice these things, it is extremely important to the graphical fidelity and feel of the game, a topic near-and-dear to my heart as of late.

The final thing to take out of this week’s announcement is that Chris Robinson, Senior Art guy thingy, is responding to the mistake he made a few weeks back before the garrison preview. I have already written an entire article on that topic, which can be found here https://stratics.com/edit/games-too-easy-resource-distribution-and-quality-yield/
The point is that he claimed the resources were limited and many people took it out of context to extrapolate that Blizzard were stingy with their art team and had no intentions of listening to the feedback of the community to influence such.

In this Model preview, we see the following quote:
…staying focused and keeping the scope reasonable (while still ambitious) helps us stay on track and avoid having to make painful cuts later on down the line. We really wanted to prevent that with the player-character revamp, so we made the decision early on to stay focused on improving what already exists in-game, and making sure we really nail it.

That said, we’ve also read your great ideas and feedback about features that you’d like to see as character customization options. Your collective voice matters to us, and we’d love to bring some of the coolest ideas to life someday if we can.

This is important to me because I want people to understand what is really happening with these previews. This is not something that they need to be wasting time on showing off, especially when they aren’t finished. What we are seeing here is small teasers, leading us up to what potentially may be the most explosive expansion of a game that is 10 years old come the autumn. When you keep it all in perspective you truly realize how much Blizzard as a company has matured, and can fully appreciate how much greater these models are from the ones we have played for the past 9 years. Its unfathomable to think about what the game will look like, but hopefully with all this in mind any one claiming that the art resources are being squandered gets their reality check in the mail.

Compare anything in this video game from MoP onwards to anything from when people consider the game at its peak, and you will laugh at how far its come. Today, Chris Robinson and the rest of the art and animation teams take one step further into the immortality the character models permeates, and get us even more excited for the upcoming beta!