Today marks the release of more information via social media, that Warlords of Draenor will NOT be using flight throughout the world of Draenor at launch, and has not been confirmed to be used at level 100, despite the likelihood obviously that it would be. Alex Afrasiabi, lead world designer for World of Warcraft at Blizzard Entertainment go’s on to say that perhaps players would perhaps learn to enjoy the world without flying, and that they are waiting to see how players react to this limitation.

Personally I would say that I’d have to agree with the idea that the world we play in each expansion would benefit more from players having to explore more, allowing for much of the hard work that go’s unseen in the world more noticeable. If you look at fellow writer; Samkos recent post about Easter eggs in World of Warcraft, it could be argued that many of those aspects of the game would be more seen if flying did not exist in Azeroth. That being said, I would have to then counter that by saying flying is purely a convenience tool, and allows for players who have their daily routines in game to do that content easier and less laborious than it would be without. Either way, it’s interesting to see the approach to flying they are taking with Warlords of Draenor, and I share the curiosity of Mr Afrasiabi on how people will react.

Other information today, also through social media was that the starting event leading up to Warlords of Draenor’s release will be set in and around the Dark Portal in Blasted Lands. It has been said that the initial quests and events will take 40-45 minutes and will feature the player defending the world from invading Iron Horde through the Dark Portal. The event will see players attempt to shut down the portal itself, presumably leading to the events where Garrosh steps through the portal. Alex Afrasiabi is keen to emphasise the realisation of how bad the Iron Horde are, and mentions that we will see how important it is for us to address the problem immediately, or encounter a full invasion comparable to the first war.

Yesterday saw the launch of Hearthstone, and indeed the Hearthsteed mount (which you can read the article further to learn how to get your own). Speculation on what came to the original red version of the same mount was answered by Blizzard Employee; Corey Stockton, who confirmed that the model will infact be used in the future and that they have plans for it’s implementation. This comes as players wondered if the original designs were faction specific colour variants, only now it seems that this could be a future reward for WoW from Hearthstone. The release of Hearthstone itself did not avoid the usual issues with a new launch release, and some players reported difficulty redeeming their mounts in game. Blizzard addressed this by asking players to log out of their accounts and back in, which seems to be a fix for the issue. 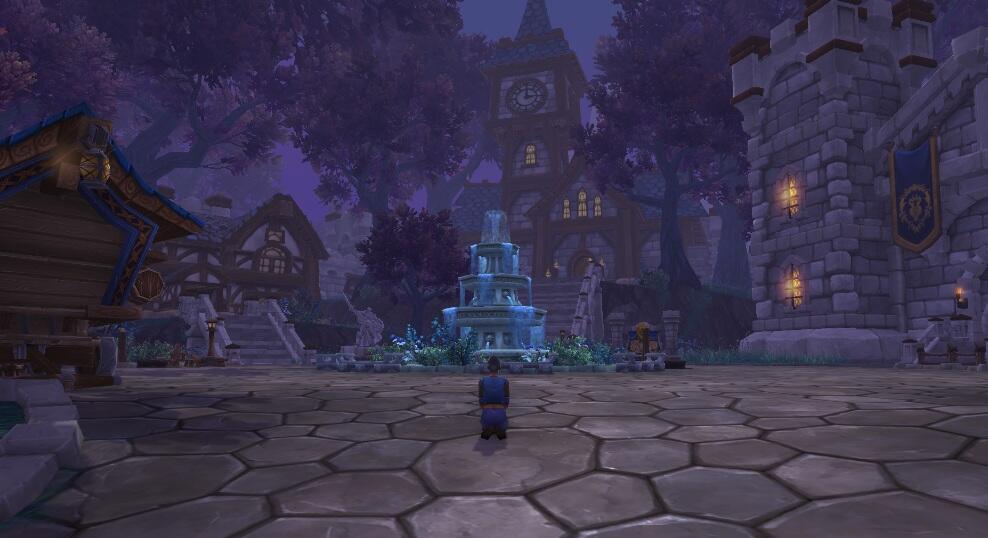 Finally we got more information, or rather confirmation on the possible scale of Garrisons; the player housing / instanced area in Warlords of Draenor from Jeremy Feasel, an employee of Blizzard who works on Garrisons, pet battles, the Timeless Isle and more features of the game. Upon joining he shared this screenshot, which features the Alliance player buildings present in the Garrison feature. The screenshot itself supplies the realisation on both scale and progressive features unlocked through achievements and progress in the game. The fountain in the centre for example, that would be built over time and presumably from a reward, achievement, or time related unlock process. What can be said is that personally I think the whole thing looks fantastic. The implementation of this feature alone to World of Warcraft will bring more addictive and enjoyable elements for players to be involved with outside of raiding or pvp. The original scale of the buildings I saw at an early stage of last years Blizzcon were tiny in comparison to what can only be a more progressed and advanced Garrison. This is fundamentally one of the most anticipated implementation for WoW, and with many other games doing it arguably less well planned than they could of, it will be interesting to see how this affects daily WoW life.

With WoD just around the corner now, and Beta invites expected very shortly, be sure to bookmark WoW.Stratics today, the only place you need to be for everything

Warlords Home for the Holidays