Whelp, as per usual WoD alpha launches the week after another “wow killer” mmo competitor. Today we will be starting the media storm that is this expansion with a look at the Horde Garrison, previously unreleased despite apparently being partially finished!

In this article, we will examine a variety of images obtained via MMO-champion that were taken from day one of the Alpha. Please understand that what you see here is likely less than half finished, and will continue to change many times. Each picture will follow with a description and Metro’s opinion on the state of the process as well as potential. 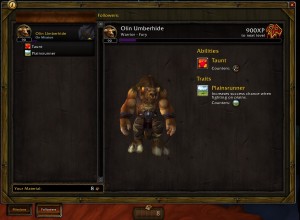 The first one we see demonstrates what appears to be a Horde Follower. Its even using the new Tauren model! On the right, we can see its abilities and gain some insight into the mini-game this appears to be developing into. We see that Taunt is its ability, but the word “Counters” appears beneath with another icon, resembling feline swiftness. This is an interesting concept to me, because it sounds very much like we will want to pick and choose which followers we gain, and then which we send on missions. Its too early yet to tell, but does this mean there are an infinite amount to choose from? Will this decision be made early in leveling, or can it be refined once we take our time at max level?

No one knows these things yet, but we all await their answers.

The next image we examine is even more telling and thought provoking. Let’s break it down piece by piece.

Starting on the left, we see the “in party” status. As the previous screen was the followers tab, and this is missions tab, there was likely a way to pick from the previous image.

Next, looking at the main portion, we see the name of the mission and its description. It explains where it will take place, and gives some brief hint as to what will happen. It appears a patrol around the garrison will reveal some unwanted intruders this time, and our pal Olin will taunt the hell out of them. Hopefully.

On the bottom of the main portion we see the “Rewards.” Its quite obvious that this is far from finished, but it leaves room for extrapolation. It appears that there will be some luck involved with the rewards, which I can live with, especially if the bronze reward is substantial. Experience and perhaps other resources don’t seem to make sense to me yet, but I am excited to learn exactly what their function is.

So what does this mean for the player? How many missions will we get? Is this going to be in the same fashion as Hearthstone and Heroes of the Storm were we have to log in each day to get these missions? That doesn’t sound like a bad idea, but I’m hoping we see less of the rigorous 24 hour cycle blizzard seems to bank on. Regardless, it should work out that these missions coincide with zones and leveling, so we will learn more shortly!

The next image we have today is of the interface for selecting and building structures. First thing we see is that there is a sort between Large, Medium, and Small. This likely means that there will be a limit to how many of each you can have, or perhaps it will be to help balance cost and time.

Next we notice the Trading Post, when hovered over, displays that there is indeed a time and cost, and also yields a description talking about more missions; answering my previous question partially.

Now when we are talking about time of building these things, how do you think it will work? There are many of these small facebook type games out there that you have to deal in real time to get anything done, forcing you to have to check progress for months on end to ultimately achieve your goal. I’m hoping this will not be the case, but regardless, once each place is built, I can’t imagine there will be too much to worry about. Perhaps the upgrading will again take large portions of time?

The final thing to take notice of is the fact that there are multiple plots and multiple options. This is pretty exciting, as it means each garrison will be fundamentally different from the next. When you guys see some of the screens of the actual walk-around version, you will be as excited as I am about this! I can’t wait to see how much plays out!

I added this once just out of interest. Its what appears when a building is complete, but once again the time seems like the limiting reagent. Will it appear when elsewhere in the zone? Can I get an alert on my phone if it completes outside of my time in game? How cool would that be!

This is the first of two looks at the actual Garrison lay out from the ground. I was impressed with the UI elements, but this is where the real magic happens. All of the NPCs and structures in here will be full interactive and customizable. The first image we have shows a peon, using a new Orc model, taking a snooze next to a closed up mines. Perhaps its in construction? Or based on the image showing the layout, it may be locked up until we advance to a further point in EXP gain. Regardless, the tents, logs, and even lighting is really good for this early in the process. I am excited to see what this area has the potential to transform into. I wont lie, I am not sold on Frostfire Ridge being the starting zone and the place we will build in. Jade Forest was so immaculate that this will really struggle to live up to my expectations, but over all the other zones seem to be even better, so I hope the Garrison gives this zone the boost it needs.

The final image we have to examine is a nice look at the complexity the Garrison presents, even on day 1. Front, we see a new model Orc Peon attempting to use his puny brain to build stuff. Work, work. Yes, something need doing. Get to it.

What I am most excited about is the fact that there is stairs and multiple levels and layers. It seems silly, but this level of design makes the Garrison feel that much better, and when we take a moment to examine the surroundings we realize that all the structures and NPCs will be intertwined and interacting. I simply can not wait to see images of one further along in completion, and hope I can get my hands on access soon!

I hate to say it, but I am honestly looking forward to this feature as much as I am anything else. I’ve been a top level raid leader since TBC’s end, but this feature is really captivating me. I can foresee myself spending hours in here each day just tooling around and making it look perfect to my standards. Hopefully I find time for pre-raid gearing 😉

Anyway, that’s everything. There are a lot of people who discredit this feature as minor and act like its not worth the effort or time. I wont say I was one of those people at one point, but I will say that when this was announced at Blizzcon those many months ago, I thought to myself “Oh, that’s neat. Let’s get to the real stuff though!”
Perhaps it was their fault for not being able to emphasize it more, but this really is the big new technology the expansion is centered around. MoP brought a LOT of new systems like Challenge Modes, Pet Battles, and the Tiller’s Farm. This expansion, there appears there will be more hours into Garrisons alone than all those features put together. And that is REALLY good news!

Stay tuned, as there will be many things to write about in the upcoming few days.

Don’t Worry, Servers Will Be Up Before Christmas?